In conversation with Chet Miller 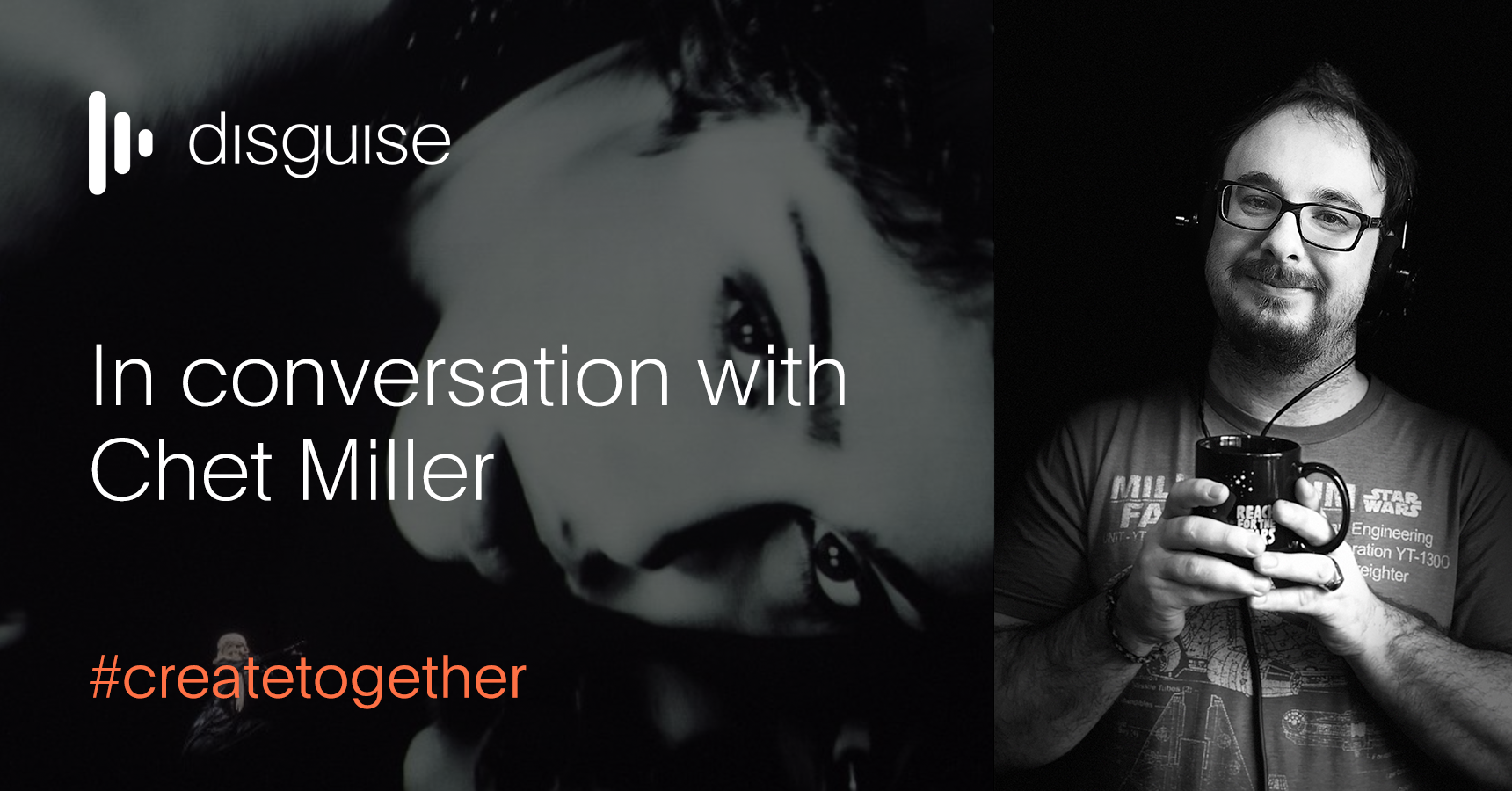 We recently had a Chat with Chet to find out how he got started, his insights of disguise, and his highlights...

Chet Miller is a long term friend and user of disguise, having worked with disguise on a freelance basis, he joined the team in 2016 as a trainer based in our New York office and has since gone back to the world of freelance programming - where he’s been working on Madonna’s Madame X tour and many theatre productions such as The Nutcracker, over the past year.

Tell us your background and what made you want to pursue a career in this industry?

I did theatre throughout high school and was doing it as a hobby while studying to get my chemistry degree at Doane University. The summer of my sophomore year, I joined a lab at University of Nebraska Lincoln doing cancer research, specifically on skin cells and how they bond together. It was an eye opening experience because I hated it. The happiest moment I had during that summer was taking two days off to run light board for the local community theatre's production of Guys and Dolls Junior. I realized I was chasing the wrong thing with my chemistry degree. When I came back to campus, I switched my major and completed my Bachelors of Science in Theatre. I went straight to graduate school for sound and video design and then moved to NYC where I designed and worked backstage, eventually focusing on video programming and engineering. That led to what was then d3 training, working with the platform for a couple shows, then eventually going full-time with disguise to do support and training. Last year, it felt like it was the right time to get back to making art with friends, so I decided to go back to freelance and branched out on my own.

I keep returning to theatre because there is just something seductive about the intimacy of the storytelling there.

Having worked for disguise before going freelance, what would your advice be for people getting started with the world of disguise?

First step, who are you and what do you want? There are so many roles that exist in a typical video team. If you are more artistic, couple disguise with Notch, Unreal or After Effects to give yourself the flexibility to be a great asset as an editor for content. I like a technical challenge as well as artistic, which is why I took to programming and engineering. If you want to design, look into Vectorworks so you have a better understanding of projector placement. There is so much to do, and not enough people to do it.

Secondly: chat with the community. I was fortunate that early on in my time working with disguise on projects, I met some amazing programmers (Rodd McLaughlin and Matt Houstle) who became not only mentors but good friends. This community is very close-knit and welcoming. If you want to get involved, join the facebook groups for the regions, and disguise is opening a community portal soon, which should be another great way to get connected without having to utilize social media.

If you're learning the software, the training is super helpful, especially since disguise has been streaming sessions for free during the pandemic. Get the foundation, then rebuild old shows in disguise. I have found giving myself a task is the only way I can learn something.

What excites and motivates you about video production for live events?

While the technology is neat, in the end, I love the storytelling. Adding our team's voice into the greater conversation is what keeps me coming back. Telling new stories has always been my passion, and I've been fortunate enough that a majority of the shows I'm doing are new scripts. The evolution of a script as it gets on its feet and is exposed to an audience is just fascinating.

We Live in Cairo

What have been some of your memorable experiences in your career so far?

Here in snippet form are flashes of memories: Finishing the first run-through of We Live in Cairo, which is such a beautiful show about the Arab Spring that deserves to be seen. I was full out weeping from the final song. Mixing Peter and the Starcatcher at New World Stages and knowing it sounded great. Standing in the house left vom for the closing moments of Fortress of Solitude, Michael Friedman's masterpiece. Sandwiched between Tao Li and Dustin Engelskind for a month straight to get the Madame X tour launched. Watching Dropkick Murphy from the visitor dugout and seeing one vision of what the post-pandemic world looks like. That moment when during training a concept would click with students and seeing that spark of growing. Dinners with the co-workers who became friends and then family.

But one memory that I keep coming back to is sitting in previews for Lehman Trilogy on Broadway and listening to the start of Act 3, where the Great Depression and its aftermath are covered. Living in that every night and walking out at the beginning of this economic disaster was surreal.

What are some of your favourite features of disguise?

Working in disguise is fun. The first time I sat down in the software, it just felt smooth. The joy of programming is what kept me coming back to it.

As far as features go, the 3D visualizer is key for me. I pre-vis all the shows I design utilizing disguise, and it lets me really figure out what I'm doing before a projector goes in the air, and opens up real power when coupled with automation. The ability to easily express link parameters or throw something on a virtual handle are a big part of my workflow so I don't have to repeat work across layers. The rename table, which I made a demo project for years ago, is a fascinating piece that just has so many flexible uses.

Tell us more about your YouTube channel Chat with Chet...

Early in the pandemic, I was going a bit stir crazy and desperately needed an outlet. I also wanted to do something for the community, since it was a scary time. Watching Shannon Harvey and Rich Porter step up to do it, I wanted to participate too. Teaching is one of those things I always come back to. I enjoy educating others (almost to a fault) so an educational stream fit me perfectly. I've been trying to blend in beginner lessons and more advanced techniques, plus talking with users from different points in their career. Honestly, I have been proud of the result. The name comes from an art project/live journal I put together while I was at disguise as an exploration into slack culture.

During the protests in America, Chat with Chet has been on a hiatus, but will be back soon.