In conversation with Rich Porter 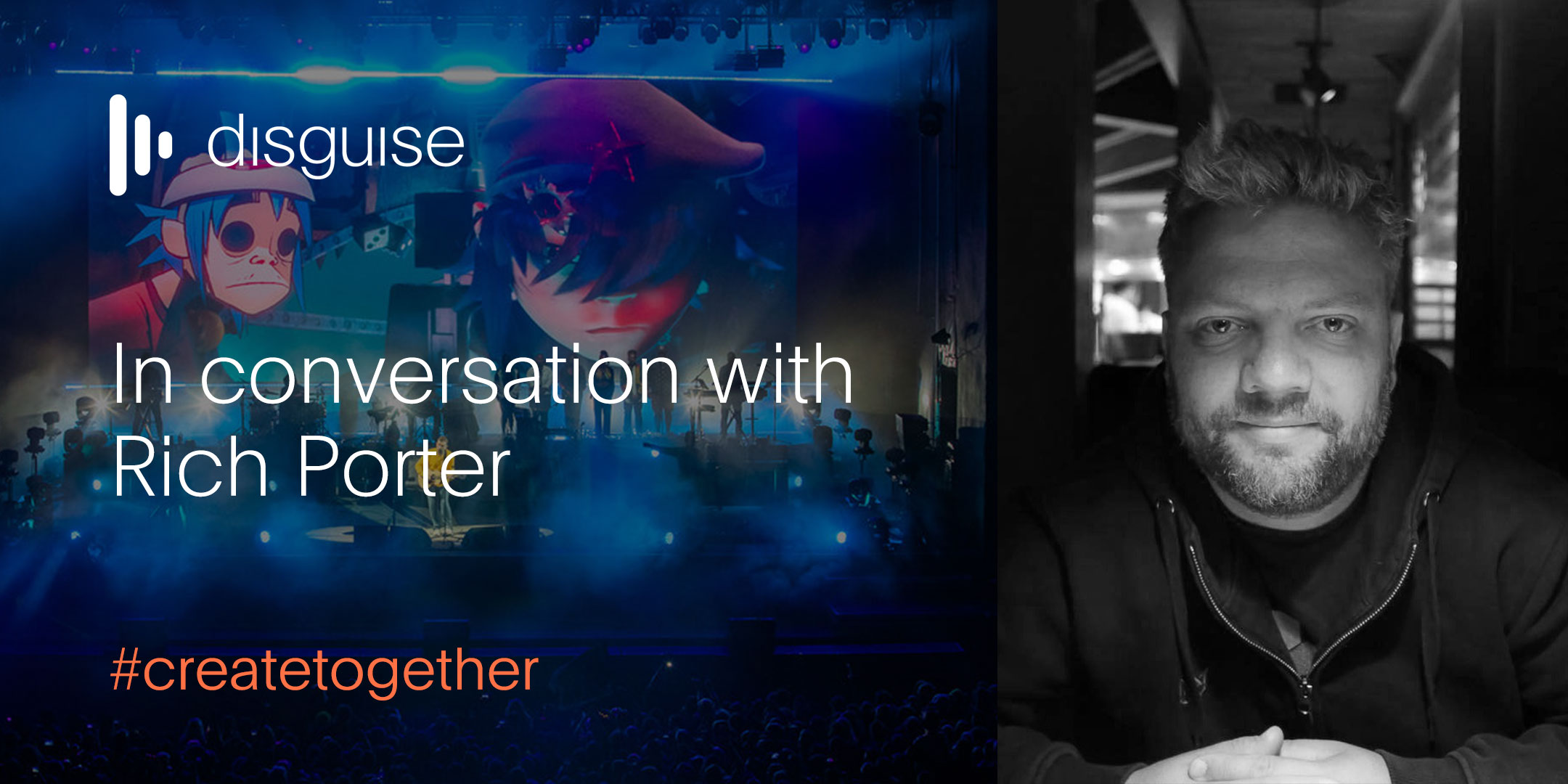 Rich Porter, long time disguise user and co-founder of video projects consultancy company The Hive, first got introduced to the world of event production from an early age, by helping out in the drama department at high school. His love for stage production grew stronger from there, where he eventually found his calling in the world of video.

We had the pleasure of catching up with Rich to talk about his career to date, some of his favourite projects and his words of wisdom…

How did you start out and get into the industry?

Like many people in the industry, my first introduction was helping my secondary school drama department put on shows. I wasn't much on stage, but really enjoyed working on the sound and lighting.  I never really excelled at academic learning, so instead of doing A-Levels I went to NCN College Nottingham where I studied a BTEC in Theatre Production. This is where it really clicked for me that my future was going to be on the technical side of live performances. My degree was in Stage Management from Rose Bruford College, the course and tutors were excellent but I've never taken a paid day's work as a stage manager in my life! At Rose Bruford I realised my interest in video as a long term career.

In my formative years, I was a geeky kid and really enjoyed building computers and making home movie spoofs with my friends. Production video gave me the opportunity to take some of my hobbies and skills and blend them with my passion for live performances. Between my stage management commitments at Rose Bruford I would do everything I could to involve myself in any of the video needs college productions had. We only had 2 Barco projectors the college had bought from the closing Millenium dome and a Catalyst V3 dongle. But it was enough to give me a foundation in video for live that I was able to translate into a career. My first job out of Bruford was at E/T/C UK and from there I learnt from some fantastic industry experts like Ross Ashton and Andy Joyes.

How did you first discover and start working with disguise?

Following leaving E/T/C I was pursuing freelance work as a Media Server Programmer and stumbled across the behind the scenes youtube video UVA had created about the Ralph Lauren projection mapping project they'd recently delivered. This was the first time I'd heard of the d3 Media Server and called the UVA office right away. It was serendipity that they were on the lookout for operators and programmers for the projects at that time. Before the end of that week, I was sitting in their office being taught the basics of d3. I freelanced for UVA for around a year before moving to a full-time position at QED Productions where I continued to advance my knowledge and usage of disguise for their special projects.

Tell us about your company, The Hive?

The Hive is a video projects consultancy that I set up in partnership with Zak Haywood. Aside from being a talented disguise programmer, networking genius and all-round video production expert, Zak's a fantastic friend and a gifted mountain biker. After hours spent tearing through the Kent and Surrey countryside together and a brief spell as housemates, we formed the Hive together. In the six years since its inception, we've worked with artists like Beyonce, Gorillaz, Kendrick Lamar, Katy Perry, and Aerosmith. We've also worked on a number of live broadcasts for the Brits and MTV as well as arena shows for Disney, Jurassic World and Marvel.

Over the years you’ve worked on some of the biggest corporate events, tours and live TV broadcasts. Tell us about some of the favourite projects you have worked on?

I spent 5 years working as lead disguise programmer as part of Ogle Hog's screens production team for the Brit Awards and MTV EMAS. Those shows have taught me so much, the sheer size of them plus the compressed timescale of a live broadcast require you to not only have your programming techniques tight but to be able to deliver them fast and under pressure.

For Marvel, we had six weeks to produce a show that was easily as big as The Brits however with the extended timescale the focus and application of techniques shifted. Speed and efficiency became less crucial and a lot more time was spent finessing the final result and reacting to track and dialogue changes. For me, it's important to try and vary the types of work you take on as it makes you a more rounded and complete programmer.

BlackTrax integration has really changed the way that we build shows. In the ever-changing landscape of media servers, I feel that the way that disguise handles live physical data really separates it from the other offerings. Building on this technology and the real-time rendering from Notch makes the new disguise xR tools incredibly exciting. A lot of my R&D time right now is going into working on xR applications as I believe XR broadcasts are going to allow us to get back to work sooner than we'll be able to start filling up stadiums again. 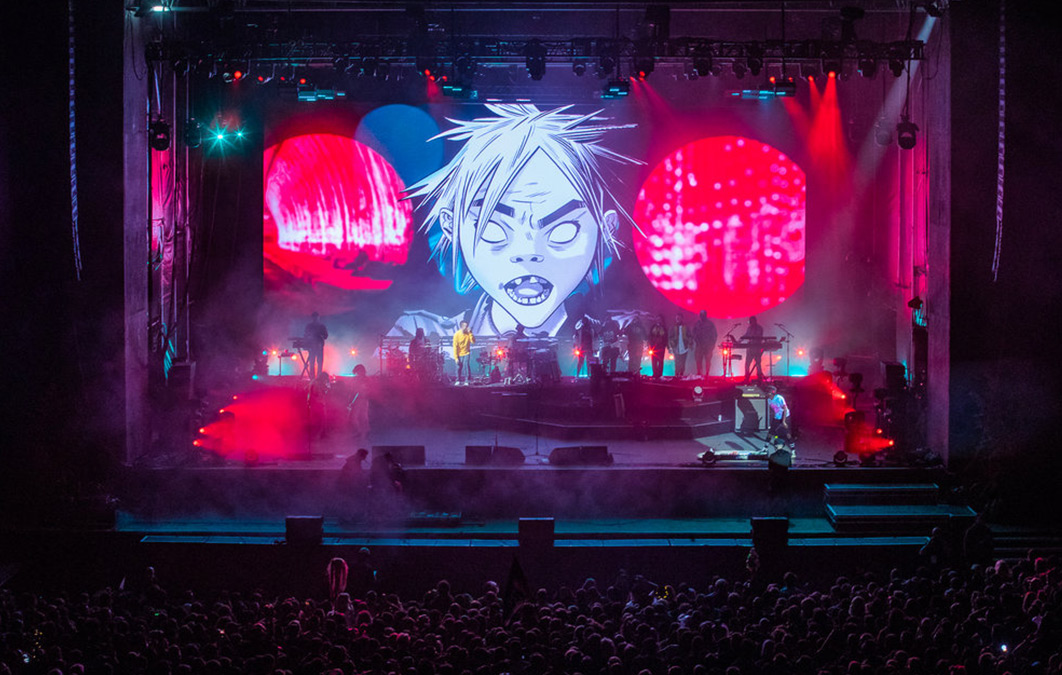 What would be one piece of advice you would give someone new starting out in this industry?

Most of my programming knowledge has been self-taught so I'd really encourage anyone to be persistent with their curiosity. Spend as much time as you can playing with tools like disguise to develop familiarity and learn new techniques. Thanks to the virus, right now there has never been more online learning available to you either so there really is no excuse not to learn something new.

I've been trying to give back to the community that has supported me throughout my career by sharing some of the tips and tricks that I've learnt along the way.

Since covid-19 has put the production industry on hold I've been trying to give back to the community that has supported me throughout my career by sharing some of the tips and tricks that I've learnt along the way. I've called this project 'Friday Sessions', you can catch up with me on Friday afternoons for live webinars on production workflows and disguise programming. Other shorter tips are being released throughout the week. To find out more visit the Friday Sessions Facebook Page.

Find out more about The Hive