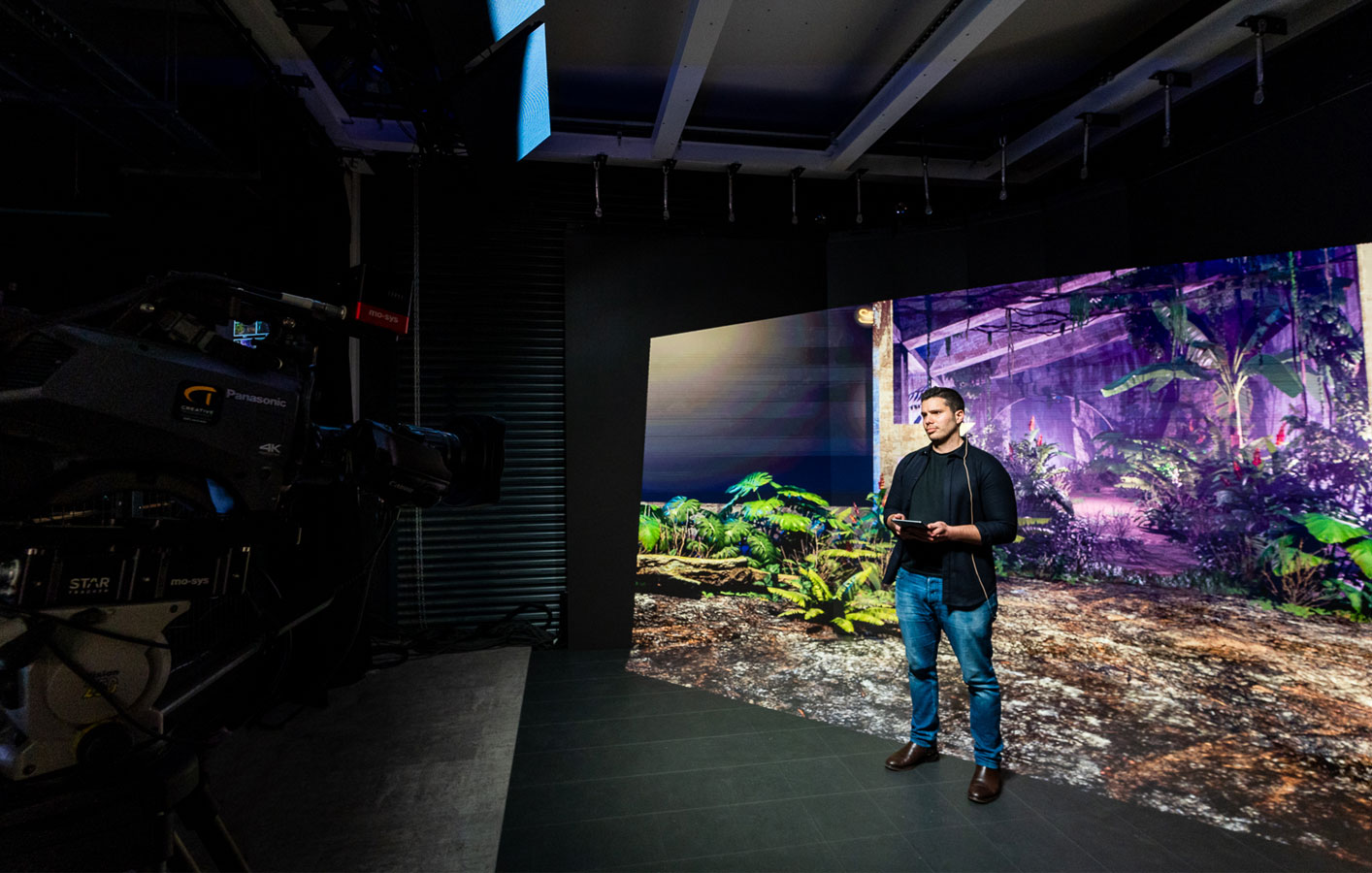 Groundbreaking new developments in extended reality (xR) have been turning the world of film and TV production on its head over the past few years.

Allowing film crews to shoot on-location all around the world without needing to leave the studio back home, xR also avoids the many pitfalls of the chroma key technology that has remained mostly unchanged since the early days of cinema.

In the last of our 2020 xR workshop series, Chris Simcock, founding director of Sensel Studio, joined us to talk about the possibilities xR opens up to film and television producers. Alongside our Global Technical Solutions Manager, Peter Kirkup, and Phil Cooksey, Sales Director EMEA, Chris explored the benefits of creating immersive sets using disguise’s xR platform.

We’ve gathered five big takeaways from their conversations, which are available to watch as a recorded webinar.

1. Enable your actors to experience their surroundings

For the best part of a century, actors have been playing guessing games. Green screen performers have had to use their imagination when interacting with their surroundings; whether it’s been a simple glance or trying to keep a straight face during a deep and meaningful conversation with a tennis ball on a stick.

By surrounding a set with large LED screens capable of immersing everybody into the world of the narrative, actors and crew alike are finally able to understand precisely what is happening and where. Actors can focus on giving their best performance, and critical action points - approaching threats, distant explosions - can be seen and reacted to more naturally. Performer tracking tools will even allow the content on-screen to respond to the movement of performers - footsteps could be left in the mud on the ground as they walk, for instance. 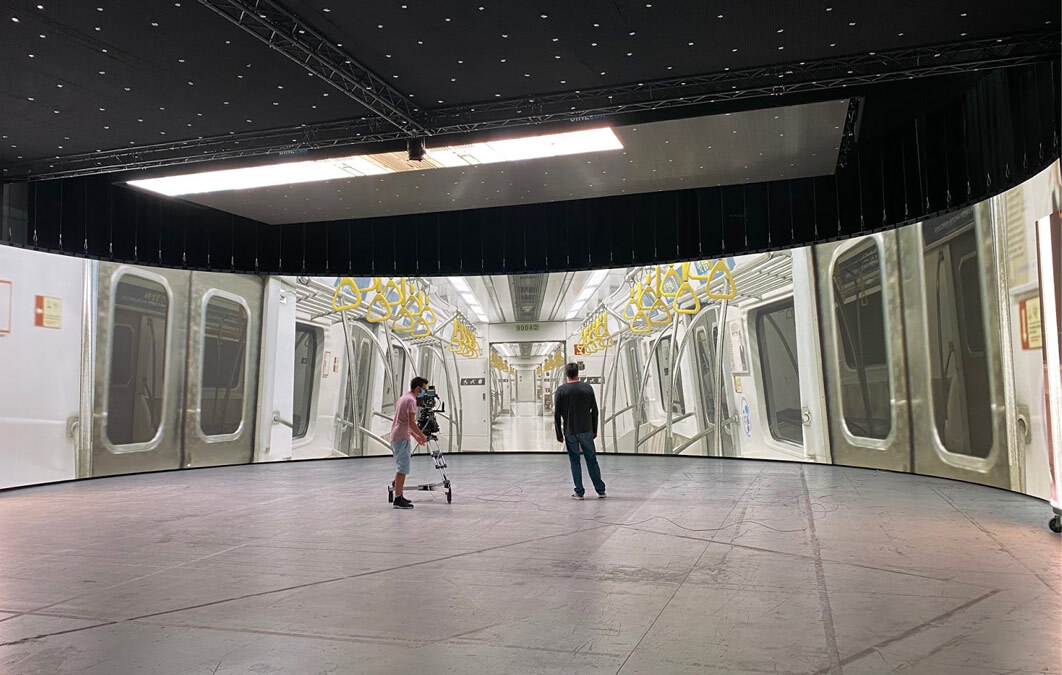 It is possible to utilise huge 360° screens on set, creating that fully immersive experience for everyone on set. But disguise is also built for smaller operations, where screens may take up only the immediate background area. This doesn’t mean cameras are limited to filming only where screens are in place, though.

In the webinar, Peter Kirkup showed how disguise’s set extension functionality allows cameras to utilise augmented reality. As the camera moves and roams beyond the LED screen set-up, content is rendered in real-time to ensure the camera continues to capture the environment. In reality, it might be filming an actor wandering in front of a pile of cables - but it’ll look like they’re still in the midst of an alien world.

3. Tie the entire set together

By using our technology, producers can create cleaner, easier workflows for everybody on the team - uniting the processes behind every aspect of a shoot. The disguise platform allows traditional set elements like overhead LED lighting to be synchronised with mapped out workflows so that they can react in real-time to scenes being filmed.

Because the disguise platform is layer-based, DMX-driven LEDs can be added into and taken out of workflows easily. This means directors of photography can tie equipment outside of the camera’s frustum to the action occurring on the LED screens being filmed. Movement on a train, for instance, can be shown both by the scenery passing the windows and by the naturalistic pulsing of lights that fits the rhythm of that movement.

Teach yourself the disguise xR workflow for free

4. Understand every aspect of your set before you start filming

Because disguise allows for so much control over what happens on a film set, there are significantly more options available to crews when filming. Directors can change their minds regarding the time of day at which a scene takes place, or even which continent the actors are on. A curious director can use the disguise software to plan out xR workflows before they even reach the set - mapping out their space, and using disguise to pre-visualise what each choice will look like when rendered live on set. This means that time and money is saved by streamlining the on-set activity.

Learn about pre-visualisation with disguise

Bringing up a set simulation that he had built within disguise, Chris Simcock used the workshop to demonstrate how a director might light a car on set. As well as creating lavish backdrops that actors can react to, the disguise workflow allows directors of photography to light their cast in a way that will appear more authentic to viewers at home. LED volumes can bathe in the orange glow of a forest fire or the stark bright light that bounces off of the desert sand.

The example showed exactly how the different elements of disguise combine to create stunning impact. A car in the middle of a virtual set can be simulated within disguise so the director and their crew can better visualise the shot they’re looking for. Because the car is going to be surrounded by large LED screens, it’s possible to create a more believable image in which real reflections are visible in the windows of the vehicle. The DMX-driven overhead lights can be built into the director’s plans to help create a sense of movement. And, best of all, every variable can be rendered and tested in advance. The director can simulate how the reflections will look in the car window, mapping them onto the shape of the vehicle, and adjusting the off-camera images to ensure they look as intended. By the time an audience watches the show, it will look as though the car is racing through the streets of a distant land, perfectly in sync with its environment, as if it were there.

What does disguise offer for film and TV production?

The word ‘immersive’ is thrown around a lot when we talk about xR, and that’s because extended reality workflows really are immersive on almost every possible level. As well as dropping your cast into the thick of the action, disguise allows your set to function as one to deliver real-time background imagery that can be extended through augmented reality. It allows for equipment to be united under one system, that can be mapped out in advance to provide clarity to the crew before they’ve even got onto the set itself. 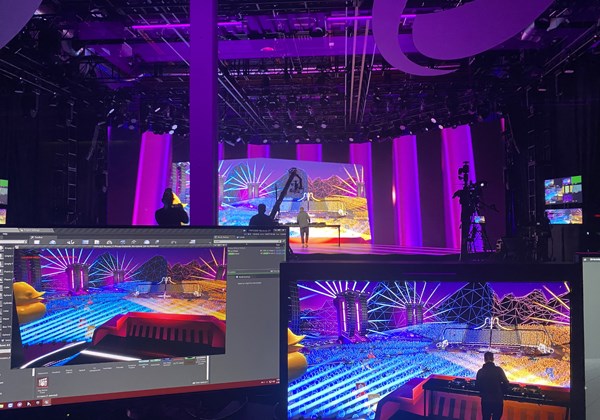