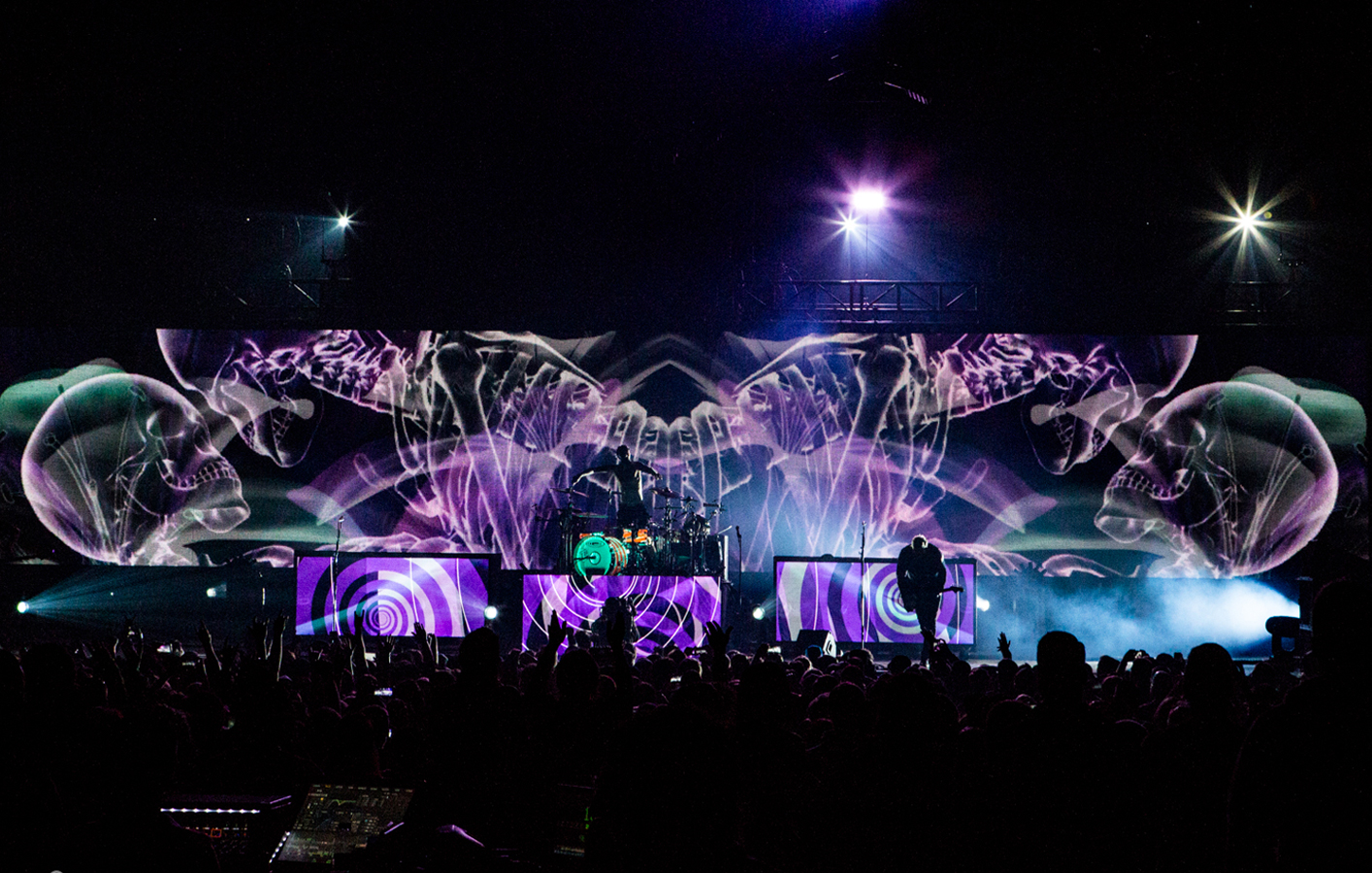 The ongoing tour, in support of the band’s seventh studio album, called “California,” began last summer; its first international leg concluded in October 2016. The US leg of the 2017 tour wrapped up in May. European and other international dates follow through autumn.

Blink-182 uses the disguise server to map lights, control multiple feed maps on the same surfaces and provide direct Art-Net control of some playback layers. Designer, the software-only version of the disguise production suite is also used offline for programming and visualization.

The tour’s production and content design was created by Dominic Smith and Bertrand Paré of Neon Black who devised a modern, minimalist look while retaining the elements of a rock show. “We wanted the show to be dynamic and to evolve as it went along,” says Smith. “Essentially it consists of a large upstage video surface angled to create a diminishing perspective, with a giant wall of 238 Ayrton MAGICDOT moving head LED luminaires upstage of it. The whole upstage assembly moves to create different looks as the show progresses.” 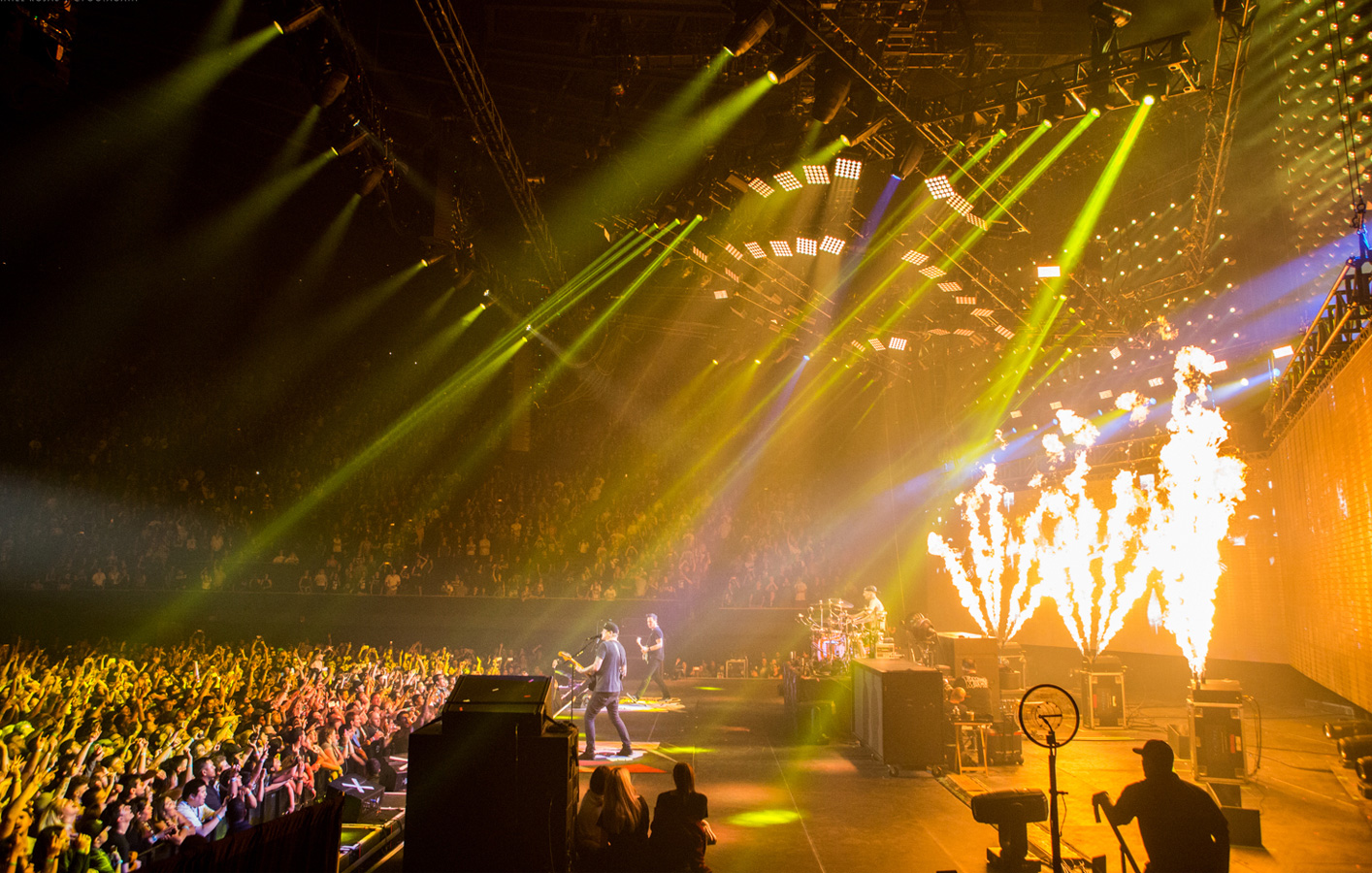 The idea was to have the wall of lights interact with the content in different ways – “sometimes blow through, sometimes be above or below the videowall,” says Smith. “In addition we also created some hi-res (3mm) video props to replace the band’s backline and frame the drum riser providing an additional layer of depth to the overall look. The lighting elements are arranged in a series of concentric diamond shapes which also move.”

The creatives chose a 4x2pro media server and  Designer to achieve the design mandate. “We initially looked at several servers, but this was the perfect opportunity to use disguise,” says Smith. “It’s our first outing with the product, and we love it. The power and flexibility of the disguise technology is immediately apparent compared to other products we’ve used in the past.”

The disguise interface is “fast, intuitive and extremely powerful,” and “It doesn’t get in the way of creative thinking."

As a programming tool, the disguise interface is “fast, intuitive and extremely powerful,” he adds. “It doesn’t get in the way of creative thinking. We love the timeline-based programming workflow, what feels like unlimited layers, and the ease of integration with the show in general. It’s also amazing to be able to program and visualize offline using Designer and have the changes just work when transferred to the server.”

Smith points out that, “disguise will certainly form part of our workflow in the future. The ability to actually see how the show will look before you build it is rapidly becoming an essential tool to the creative process especially as budgets get tighter and production time gets shorter.”

Programmer Stefan Hambsch did all the initial set-up, but the creatives found service and support from disguise to be “very good when we had questions or issues along the way,” Smith reports. “Responses were always prompt and solutions found in a timely manner – you can’t really ask for anything else.”

During the lengthy tour the 4x2pro is proving to be “incredibly stable,” according to Smith. “Speed of programming, reliability, flexibility – it just works. The disguse system meets all our requirements with ease.”

Austin Stengle is the disguise server technician for the tour and John Lafferty the production manager. Additional disguise programming was done by Smith and Paré. 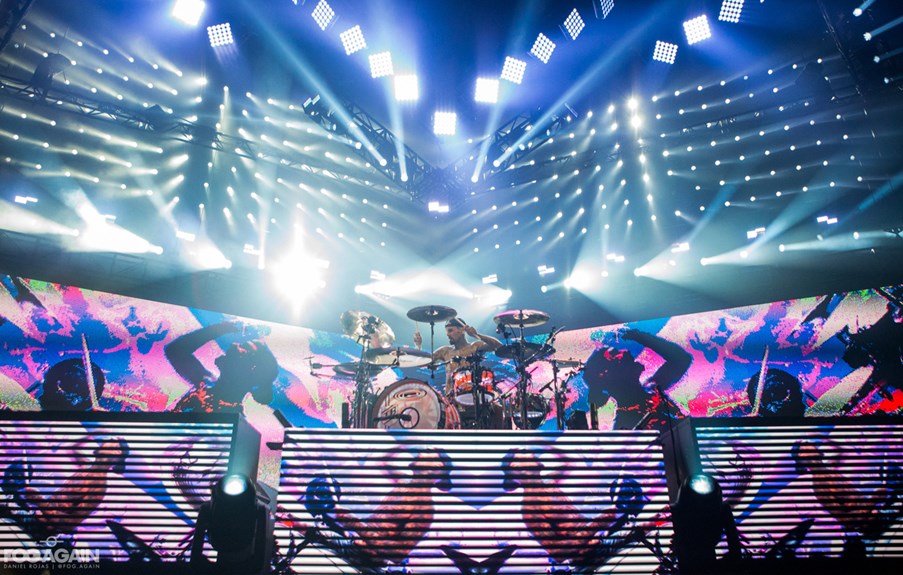 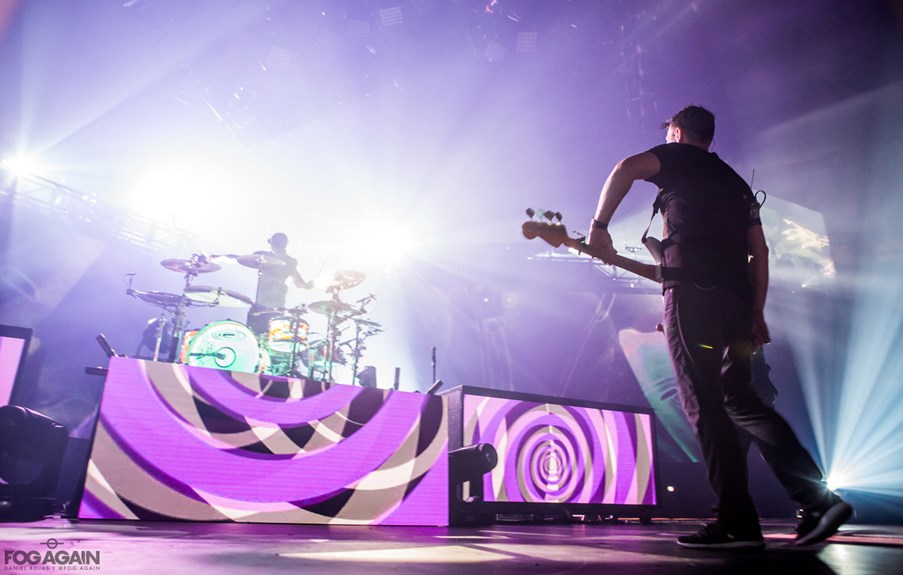 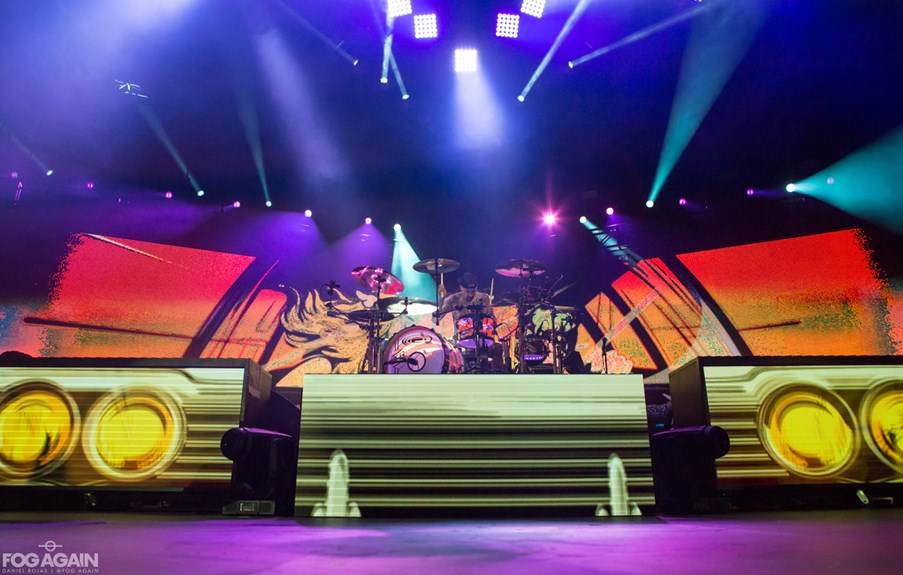 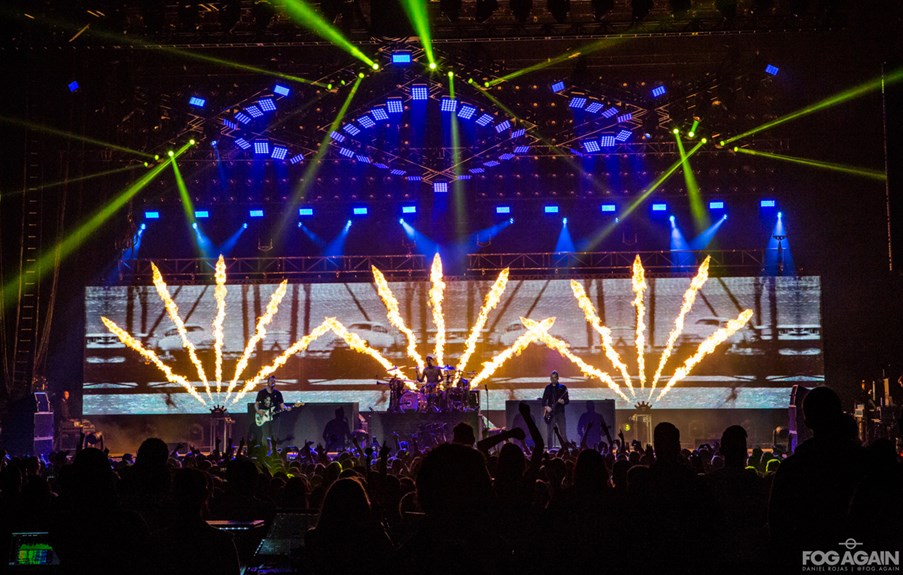 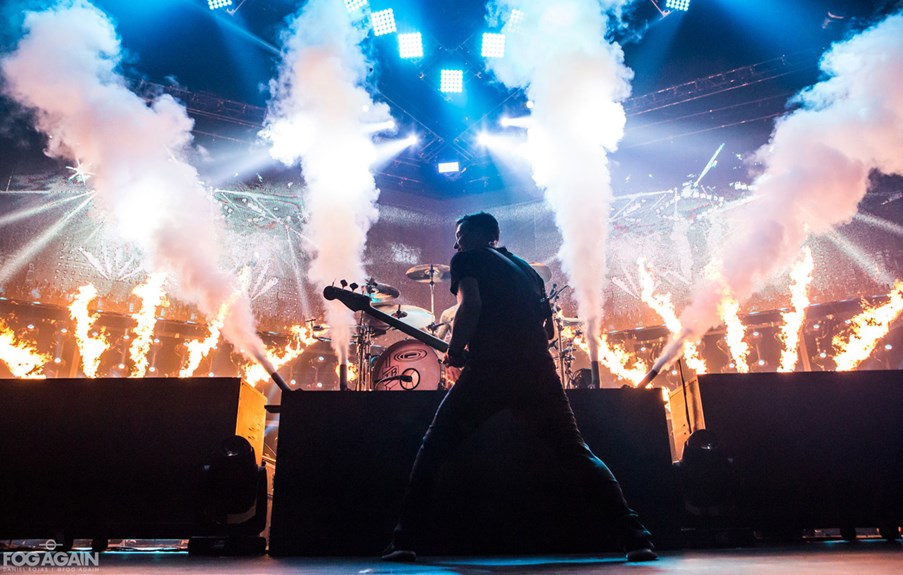 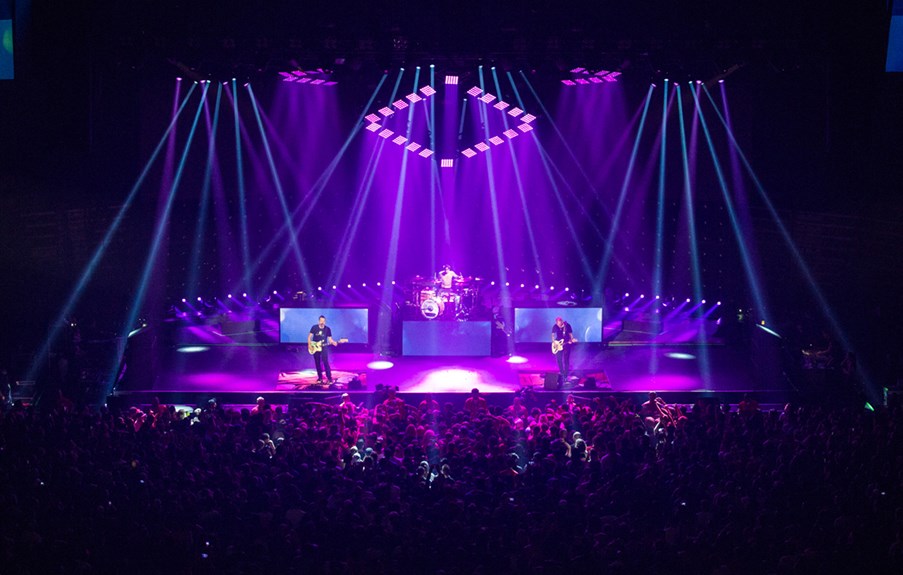 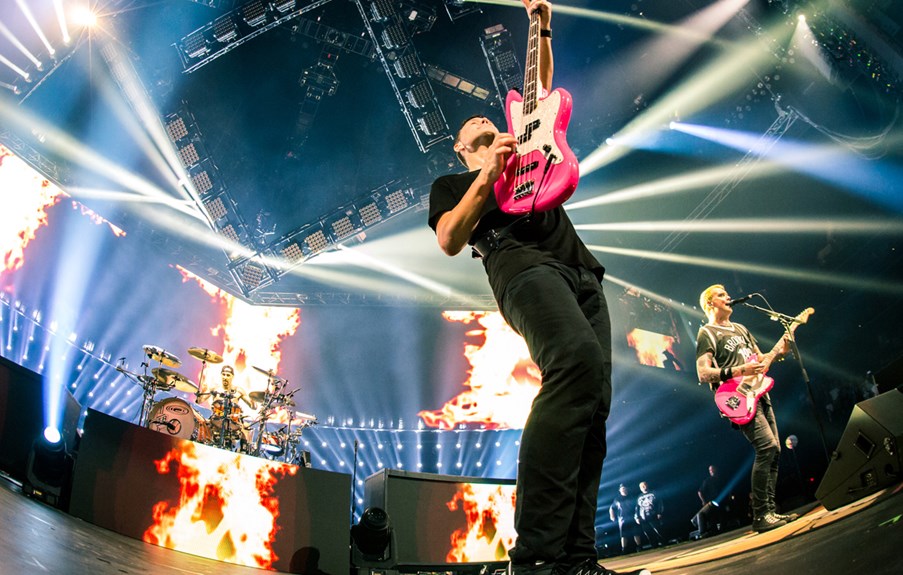