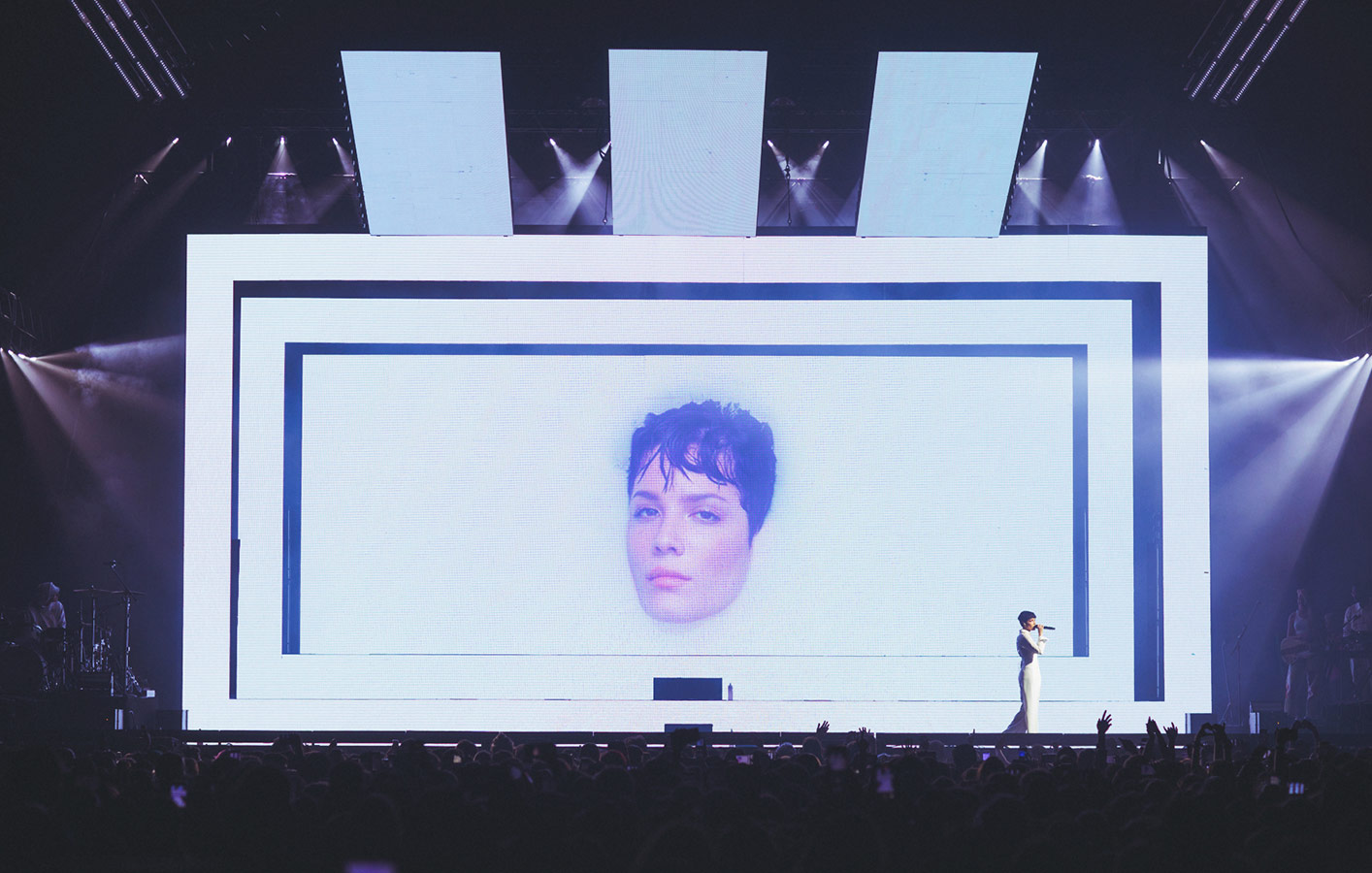 All Of It Now deploys disguise gx 2c on Halsey’s Manic World Tour.

American singer Halsey kicked off her Manic World Tour 2020 in Madrid in February supporting her just released studio album, also called Manic. The Manic World Tour spans 48 shows, and kicked off in Europe, with the next legs currently being planned for Asia and North America later this year. disguise gx 2c media servers were selected by All Of It Now to drive the show’s video and Notch IMAG real-time effects.

Numerous features of the disguise solutions came into play for the tour starting in pre-pro. “The show’s video design used a multi-layered frame, and the 3D workflow of disguise Designer allowed us to create parallel maps that placed content on the screen spatially without requiring specific renders for certain songs,” explains Danny Firpo of All of It Now, a disguise Rental Partner and Workflow Specialist based in San Francisco, who did the tour’s video programming with Cade Moore. “This gave us the creative flexibility to move content around the screen and explore different approaches for certain songs. 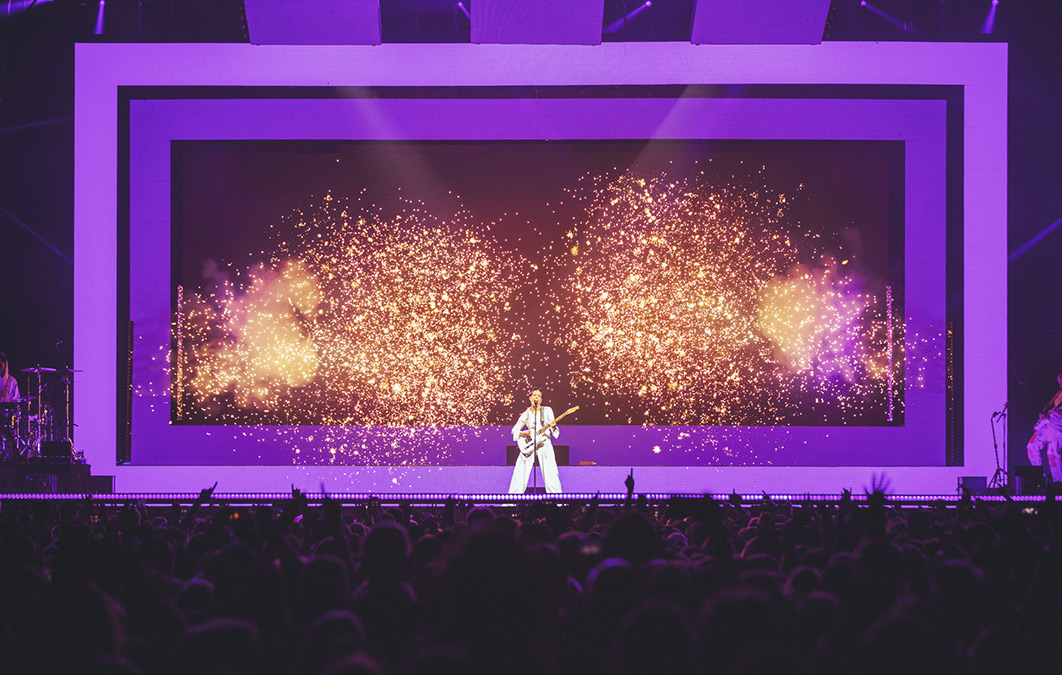 “The show used three different frame sizes for the tour – small, medium and large – but we did not have enough time to see all of the different sizes in rehearsal. We relied heavily on the 3D previs in disguise to confirm how content would look on each of those different sizes. When we loaded into the first venue using the smaller size, the content was mapped perfectly and required minimal changes during load in.” The new EVO workflow was also used in the early previz stages, merging the disguise and MA3D environments, and creating additional opportunities to integrate lighting and video departments. “For Bad at Love, the EVO overlay gave us the ability to see the Video and Lighting elements merged together in a single screen, and Arlo was able to program the stage lighting to match the lighting within the on screen content”, says Danny.

With the disguise Designer workflow, All Of It Now was able to program all three show files in parallel using the track export and import functionality to push specific programming changes to each of the show files. That saved a lot of time, according to Danny, because the track did not have to be reprogrammed three times. 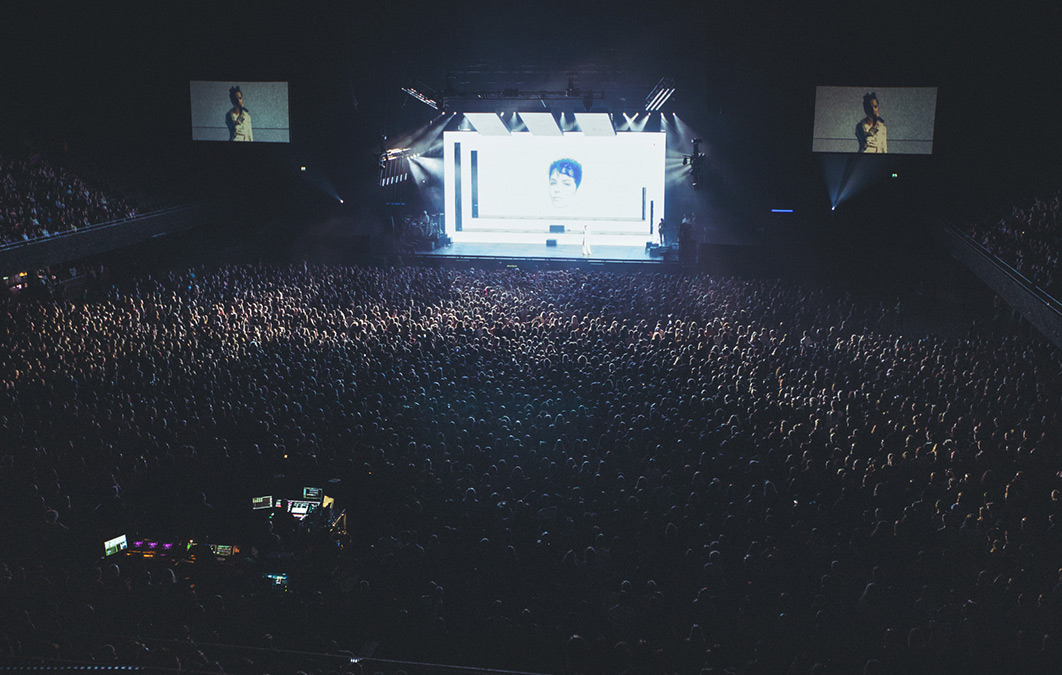 The Manic World Tour takes a “very cinematic approach” with disguise “used almost like a non-linear editing tool on a couple of songs,” says Danny. “This gave us the flexibility in rehearsal to arrange and duplicate clips for rapid revisions and fast collaboration, which alleviated some of the need to re-render content.”

“For Graveyard, we explored a 2D fluid simulation that emulated watercolor paint flowing onto the IMAG screens.  This was also used as a transitional effect for the IMAG to swirl off the screen during key moments in the song.”

Danny Firpo of All of it Now

Specifically, All Of It Now employed disguise’s screen position layer for automation visualization. “This was helpful in previewing content with all the different stair movements and positions throughout the show,” Danny says. Likewise, file naming and automatic file versioning was essential for rapid revisions. “Content could just be sent over the network, and updated, without having to manually select new content.”

The content itself made heavy use of gradients of both chroma and luma space, so “the NotchLC codec was crucial in reducing banding and compression artifacts,” he notes. 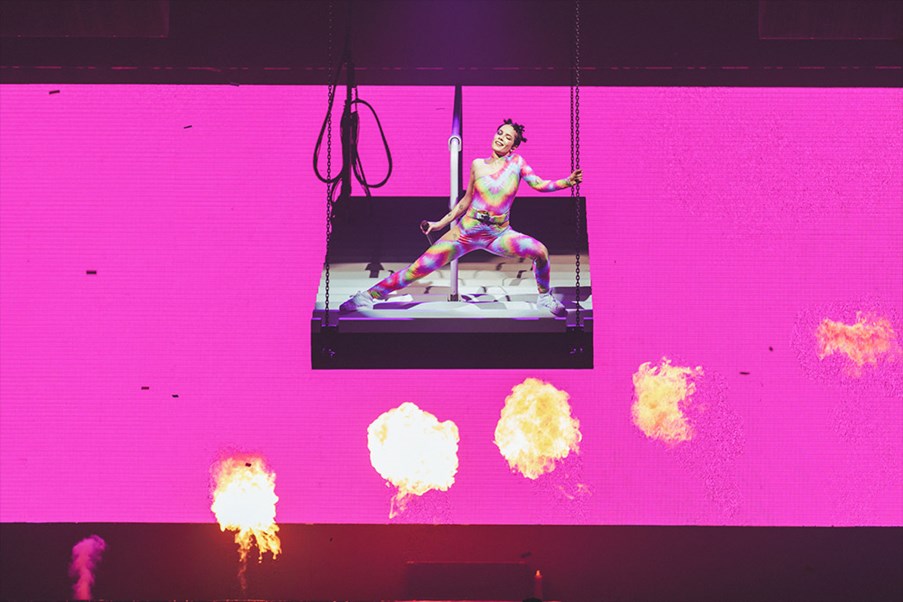 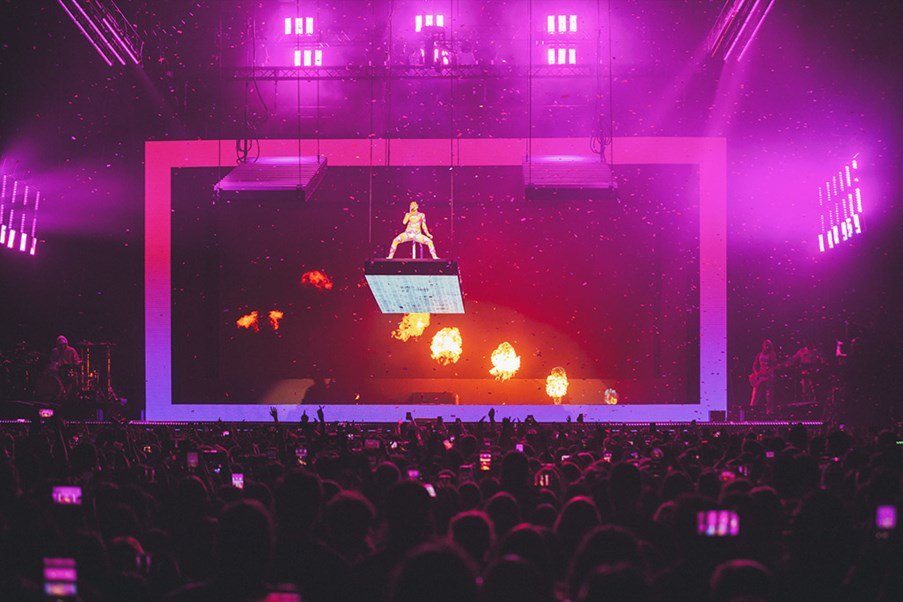 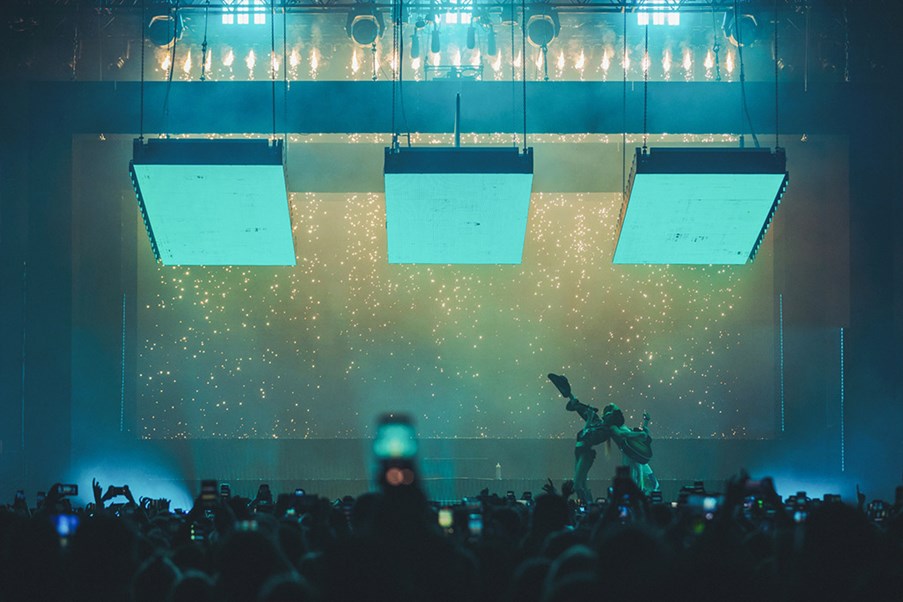 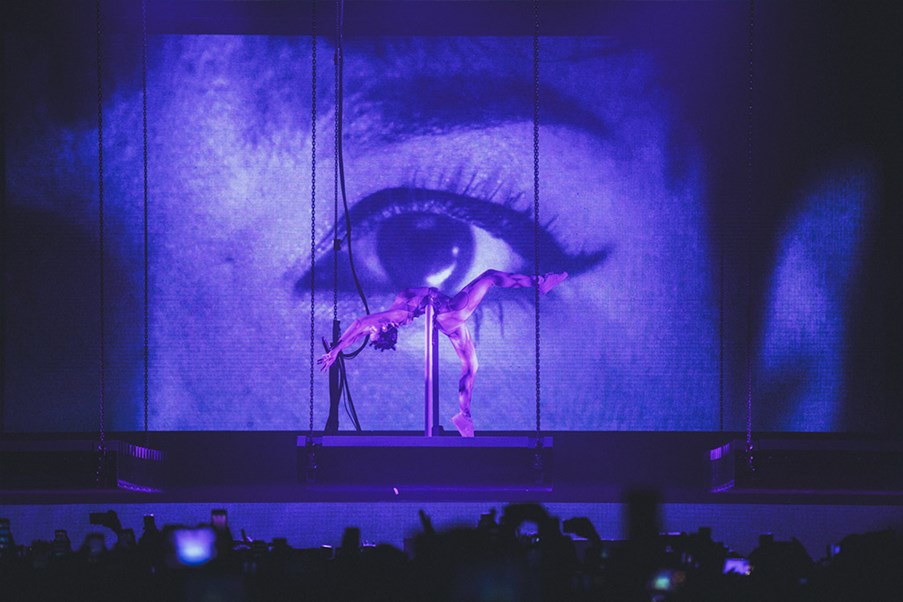 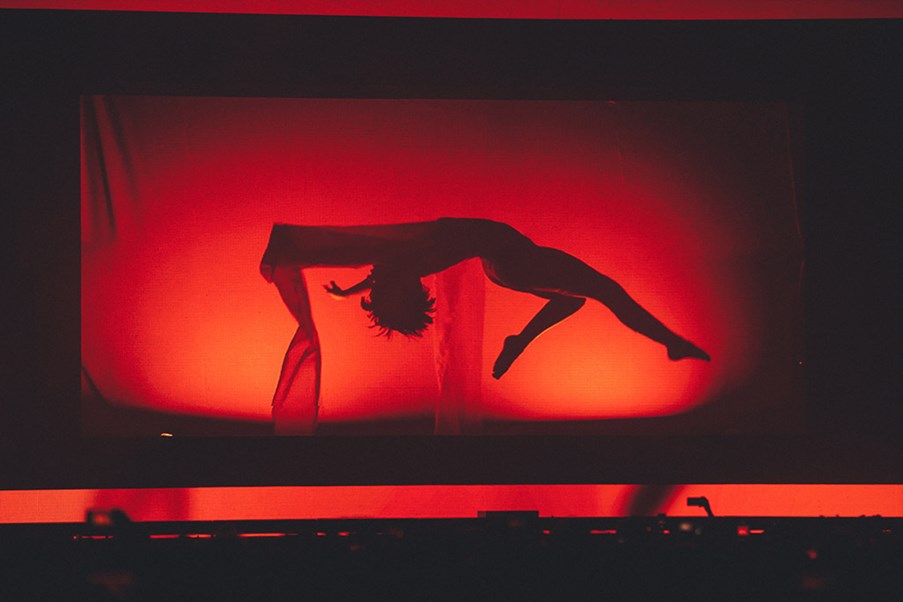 Danny Firpo, All of it Now

Cade Moore, All of it Now

Kevin Zhu, All of it Now