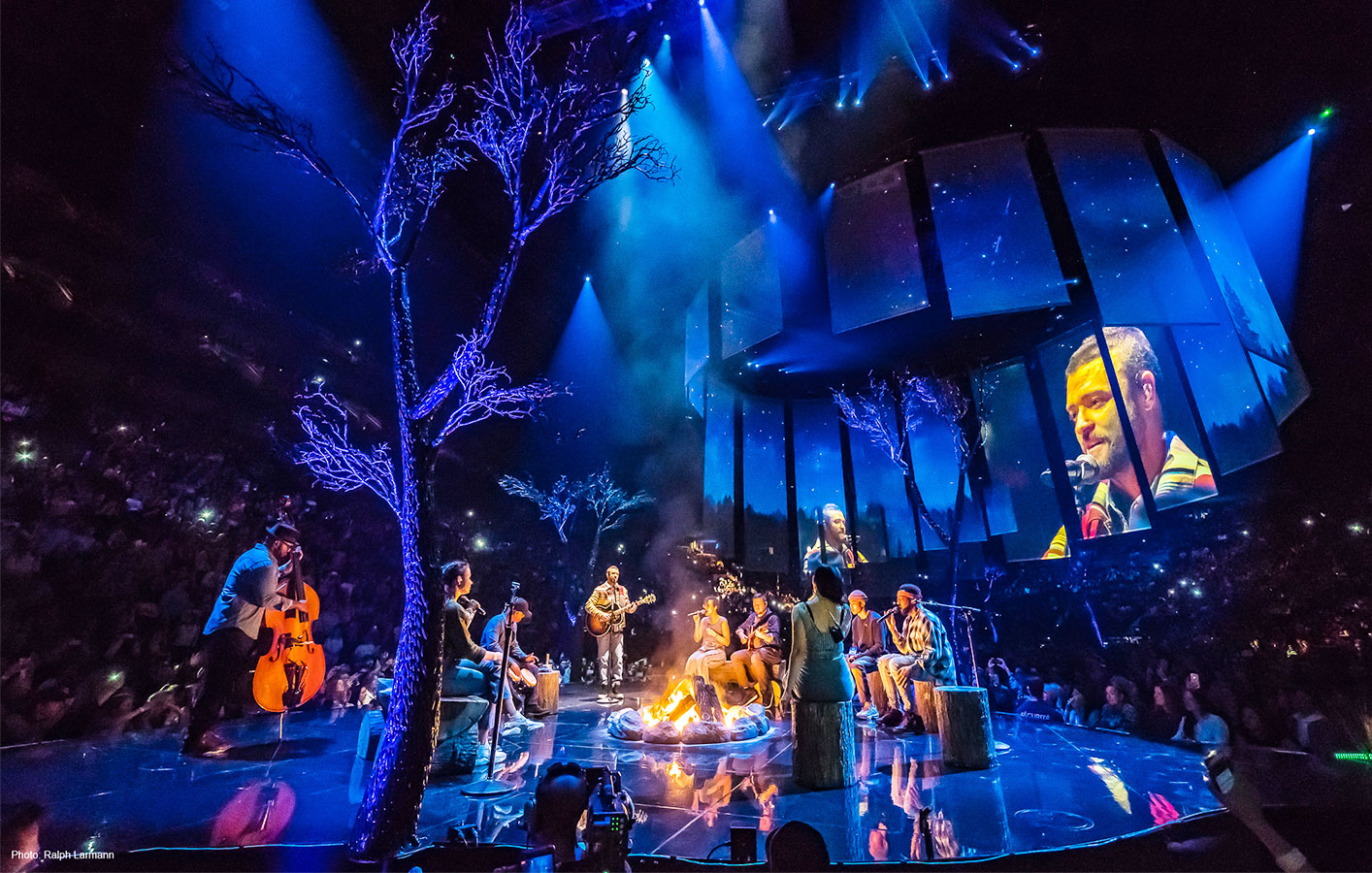 Justin Timberlake began touring his sixth worldwide tour, Man of the Woods, in March 2018,  performing 110 shows before the tour wrapped up in April 2019.

In the world of live event design and technology, it is well known that a Justin Timberlake tour brings with it next-level technical production and unparalleled creativity. The artist’s latest effort is no exception featuring an elegant, projection-centric show design and a gigantic stage system. Man of the Woods presented his music in several ‘worlds’, which were themed around the original aesthetics of his now extensive back catalogue.

Solotech provided 9 gx 2 machines, two of which were custom built to adapt to the creative vision and the power needed to deliver the unique visuals on this tour. The end of this tour marks a new server launch for disguise, who have turned the custom-built servers for this production into the new gx 2c. 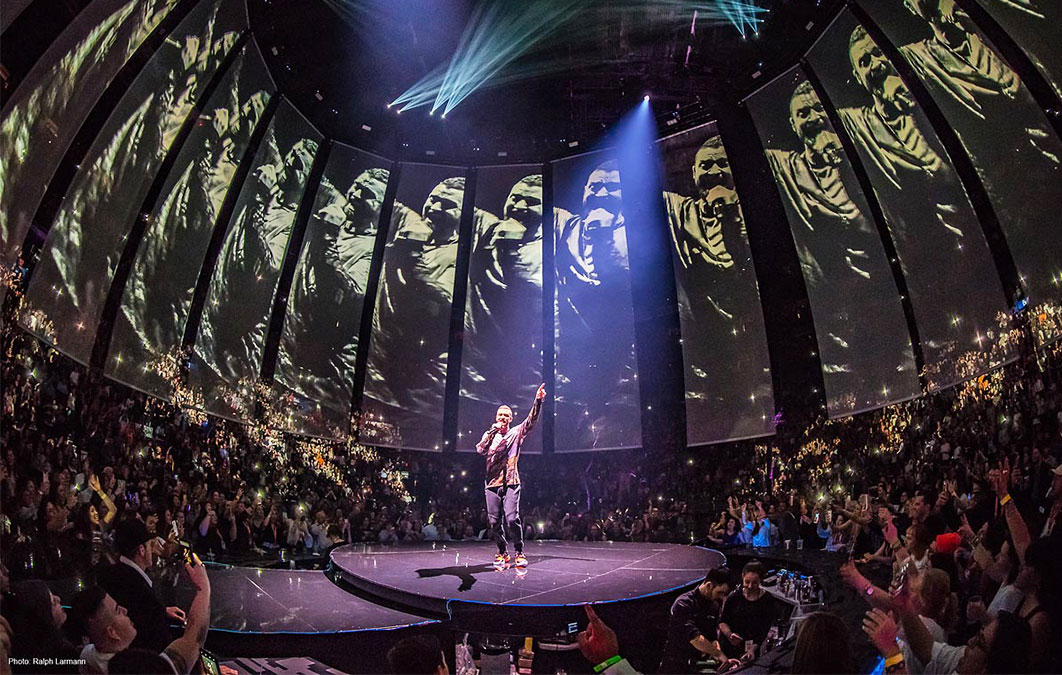 Production Designer, Josh Zangen explained some of the original concepts to the show design. “The whole tour revolved around two opposing forms – nature and the modern digital world,” he outlined. “We wanted to make sure the space always felt immersive and that you were connected directly to the performance. This is where the natural, winding stage concept mimics the Mississippi River and gave a natural flow to the environment. In addition to this, the flown projection surfaces played a key role in allowing video and IMAG to be extremely flexible and placed where it made the most impact in the many scenes throughout the show.”

The opening of the show saw Timberlake emerge from a tunnel of light, under a 30 x 30 ft. ‘MOTW’ lighting rig constructed from LED rods. To create the main stage walkway, TAIT Navigator cued the main stage revolves to rotate clockwise and anticlockwise. A massive, roller coaster-like runway, decorated with scenic trees and etched flooring, extended from the main stage to a B-Stage, via a central VIP Stage that featured a full bar, an LED flooring section, and was enclosed by branch-like handrails.

Media Server Tech, Andréanne Lafrance, was charged with handling the arsenal of disguise media servers. She said: “We had 9 disguise gx 2 media servers – with a custom dual 4K live input card each - that received signal from TAIT Navigator to track the movement of the screens. The rig changed a little each day so I had to focus all of the screens to account for trim height and any other adjustments.” 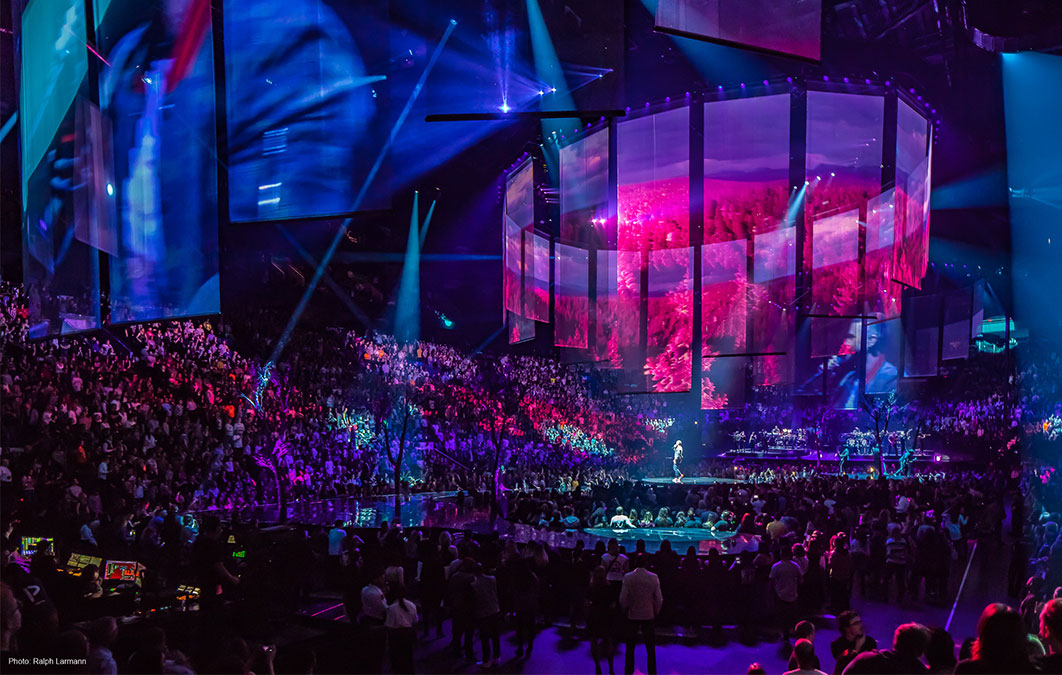 “Only one of the songs was content-only, and some made use of overlay, colour delay and so on. We had Notch on three songs. All of this was programmed during rehearsals.” She continued: “Most of the show was timecode controlled, so I made sure I hit the five manuals cues I had and adjust one effect that went in live because it was dependent on the lights. We also controlled full content on the LED dance floor, which was triggered at the beginning of the song.”

The stage stretched almost the entire arena floor, with a winding runway that featured two satellite stages and several performance areas where Timberlake could engage with fans. The 35 projection silks that lined the stage were a key aspect of the design, serving as a canvas for both IMAG and original video content. Each silk was an 8 ft. wide ‘roll drop’ curtain that could be released at 3 ft. per second by TAIT Nano Winches, creating 42 ft. of projection space.

Head Projectionist, Danny Lambert, had 36 Barco UDX 32,000 lumen units to conjure up the textures and images required for the roll drop screens - all of which appeared in 4K resolution. He said: “I started by converging two projectors, then Andréanne came in with disguise software and adjusted the image. Although the images could be viewed from either side of the roll drops, the main stage was technically front projection, while the VIP projection came from the inside. Lambert added: “This was the only 4K system Solotech owned, and I believe Man of the Woods was the first to tour it, as of when we rolled it out. Once it was integrated, the 4K possibilities really opened doors.” 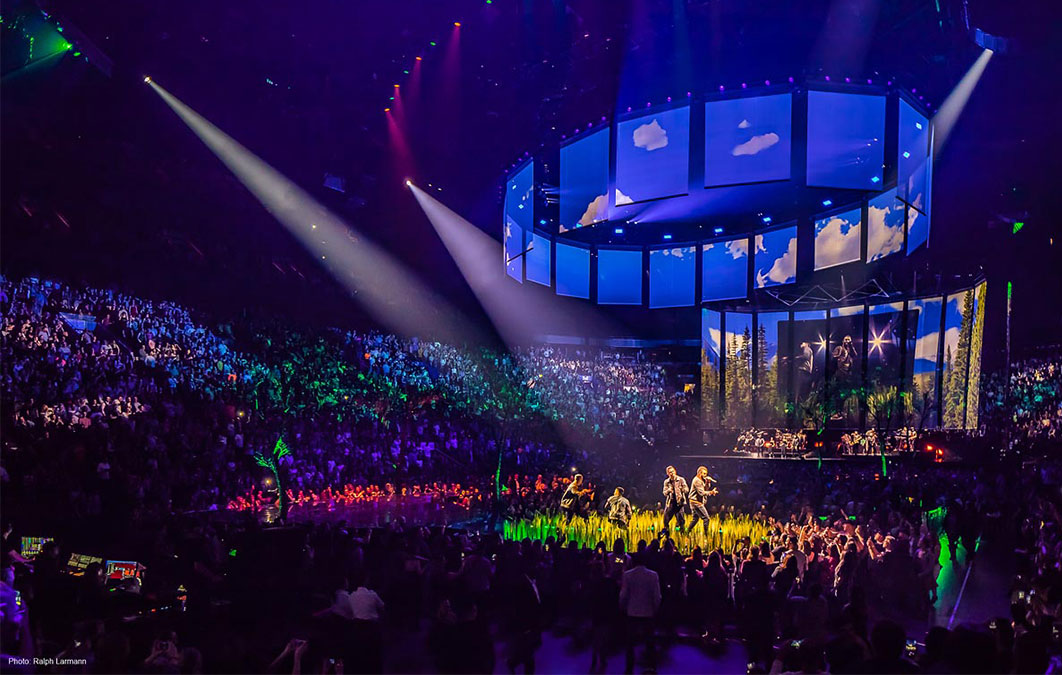 Justin Timberlake’s Man of the Woods tour provided a testing ground for the disguise gx 2c prototypes that featured increased capture, networking and storage. Penned to launch in summer 2019, the gx 2c can capture 8 x 3G-SDI inputs, unlocking new workflows for concert touring and beyond. The video inputs allow users to capture and output 2x2160p60 (2x4K@60) which is four times the capability of the predeceasing gx 2. The inputs are also 10-bit capable, with the same low latency as existing disguise pro and gx range machines.

Designed to scale and fit as part of a bigger media server system and to push generative content in live production to new heights, the disguise gx range enables creatives to go beyond the power of a single server solution, into distributed systems with many servers working as one to create a seamless immersive experience.

Committed to delivering the very best, every time, Solotech enjoyed collaborating with experts, for the second time, on a Justin Timberlake tour. Its specialists took up the challenge to provide quality, state-of-the-art equipment to implement the ambitious and creative ideas of the Man of the Woods tour. Thanks to an impressive, ever-growing inventory of cutting-edge rental equipment from over 300 renowned manufacturers, paired with trusted expertise, Solotech brought this striking production to another level. In addition
to Live Productions services and solutions, the world leader in audiovisual and entertainment technology is also recognized for its expertise in Systems Integration in various markets, namely music, sports, business, culture and education. Founded over 40 years ago, Solotech has developed an important global presence with its 13 strategic locations in Canada, the United States and Europe.