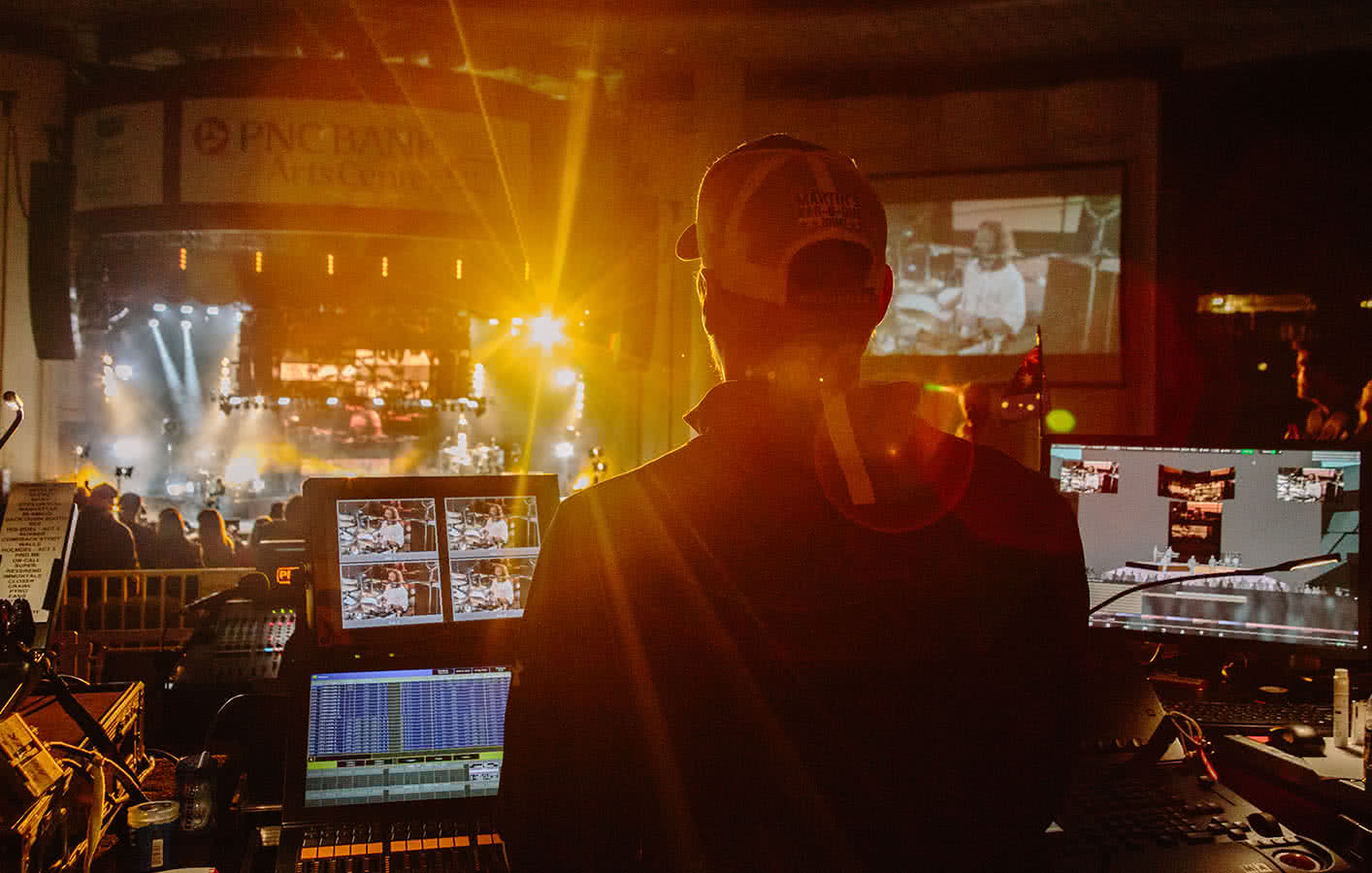 After headlining the sold out British Summer Time Hyde Park music festival in London, American rock band Kings of Leon kicked off the fall leg of their WALLS world tour with 16 dates in North America.

Accompanying the band across the globe are two 4x4pro media servers provided by PRG; two more, provided by Video Design, were added to drive the additional equipment used in the Hyde Park show.

The multi Grammy Award-winners’ tour supports their 2016 LP, WALLS (We Are Like Love Songs).  Their seventh studio album reached #1 on the Billboard 200 Albums chart.

Visual Director Anthony Cairns built the show, programmed the disguise media servers and operates them on the tour.  This marks his first outing with disguise systems. Cairns was first introduced to the disguise solution by Stefaan ‘Smasher’ Desmedt at V Festival in 2016. He then followed this up with custom in-house disguise training from Rodd McLaughlin at the disguise New York office.

I decided to make the jump to using disguise for the start of this tour after years on other media servers with Kings of Leon. The thing that appealed to me was 3D real world visualiser and the potential to block out design ideas in prepro before stepping foot on site. We set up a week of training during which my eyes were really opened to the power and sophistication of the disguise solution.”

For the tour Cairns was tasked with producing a three-act show cataloguing the band’s hits from their seven albums.  A three-part motorized Austrian drape serves to segment the show, creating a unique look for each act,  thematically following the musicians from their club days to the present.

“Act 1 is a ‘Club Look,’ simplified and cut down with a small stage set to create the feel of a club and emulate their early days as a band and their albums,” he explains.  “Act 2 has the Austrian fully closed and the band performing three songs acoustically in front to give an intimate unique experience for fans.  Then Act 3 reveals the full stage set with two Kabuki drops, moving screens and other elements to showcase the later years of the band up ‘til now.”

Cairns has main and understudy 4x4pros on the tour, each with three VFC cards genlocked to Trisync from the camera system.  A dozen HD cameras run through a Grass Valley Karrera switcher; four auxiliary lines from the Karrera feed the disguise media server.  “Combining live cameras with content we use the disguise server to drive all the screens,” which include Roe 7mm LEDs for stage left and right IMAG chevrons, a club chevron, an upstage wall masked into a V shape by disguise, and a W-shaped riser on the riser facia, says Cairns.

“The main advantage for using disguise for me is the ability to work offline.  We’ve been bouncing between festivals, arenas, stadiums and sheds and having to work with not only our touring screens, but local screens, shapes and sizes,” he notes.  “disguise has allowed me to very quickly adjust my outputs. Having the show programmed into the grandMA2 meant that after adjusting global settings on my disguise feeds I could focus and tweak the grandMA2 and we would be able to turn around new and different shows very quickly.”

Cairns explains that the disguise Visualizer has meant “countless times I could work on the show and make adjustments before the LEDs and cameras were finished loading in.  This was crucial during our rehearsals and also on the road.”

While Cairns was preparing for Hyde Park, he worked with disguise to import the extra pieces of the Hyde Park configuration, provided by Video Design, into his show.  During a few days off in Dublin he re-delivered much of the content and pre-programmed the show using clips up to 11,000 pixels wide.  “Without the physical screens, this would have been much harder on any other server,” he reports.

Cairns also likes the ability to add custom screens on site, which is useful for one-off corporate gigs where he has to customize the show to fit the corporate design.  “The disguise server allows me to do this fast and efficiently and has given us more power to control whatever is presented to us, even at the last minute,” he says.

Cairns uses 35 video layers and four Notch layers to run the tour.  He believes that the disguise Sockpuppet feature “has been crucial for me and my style of programming and operating.”  He worked with the disguise team to customize Sockpuppet and the grandMA2 to create a workflow similar to what he’s been used to in the past.

Kings of Leon doesn’t ever play to tracks: Every channel of sound is live instruments, therefore we cannot sync nor have the show running off a timeline. Having the flexibility of the grandMA2 to drive the disguise system gives me all the control at the console and allows me to make significant changes during the show if and when needed.”

Cairns admits to being “overwhelmed” when he first tackled the disguise solution. “But once I completed the online video tutorials from the disguise website and the training in New York with a grandMA2, I found myself asking, ‘what else am I missing?’  The fact is the disguise real-world values and workspace makes it very easy to understand all the elements of the show and what you are trying to achieve.”

He gives high marks to disguise support, which has been particularly important for someone new to the system who requires the ability to modify the show for different gigs.

“From anywhere on the globe I’ve been able to contact disguise support through all forms of communication, and using their project and system diagnostics we have been able to resolve every issue that has presented itself,” says Cairns.  “I’ve never seen such proactive support in a product before.  To be able to share the show with them and talk through any question or concern has been amazing!  Also, the disguise team listens to user and operator feedback to actually make positive changes to the software.”

He calls the 4x4pro “one of the most solid servers I’ve ever worked with.  The machines are very stable and can take a beating.  The amount of outputs and resolutions they can handle is impressive, and the understudy disguise net system is brilliant!”