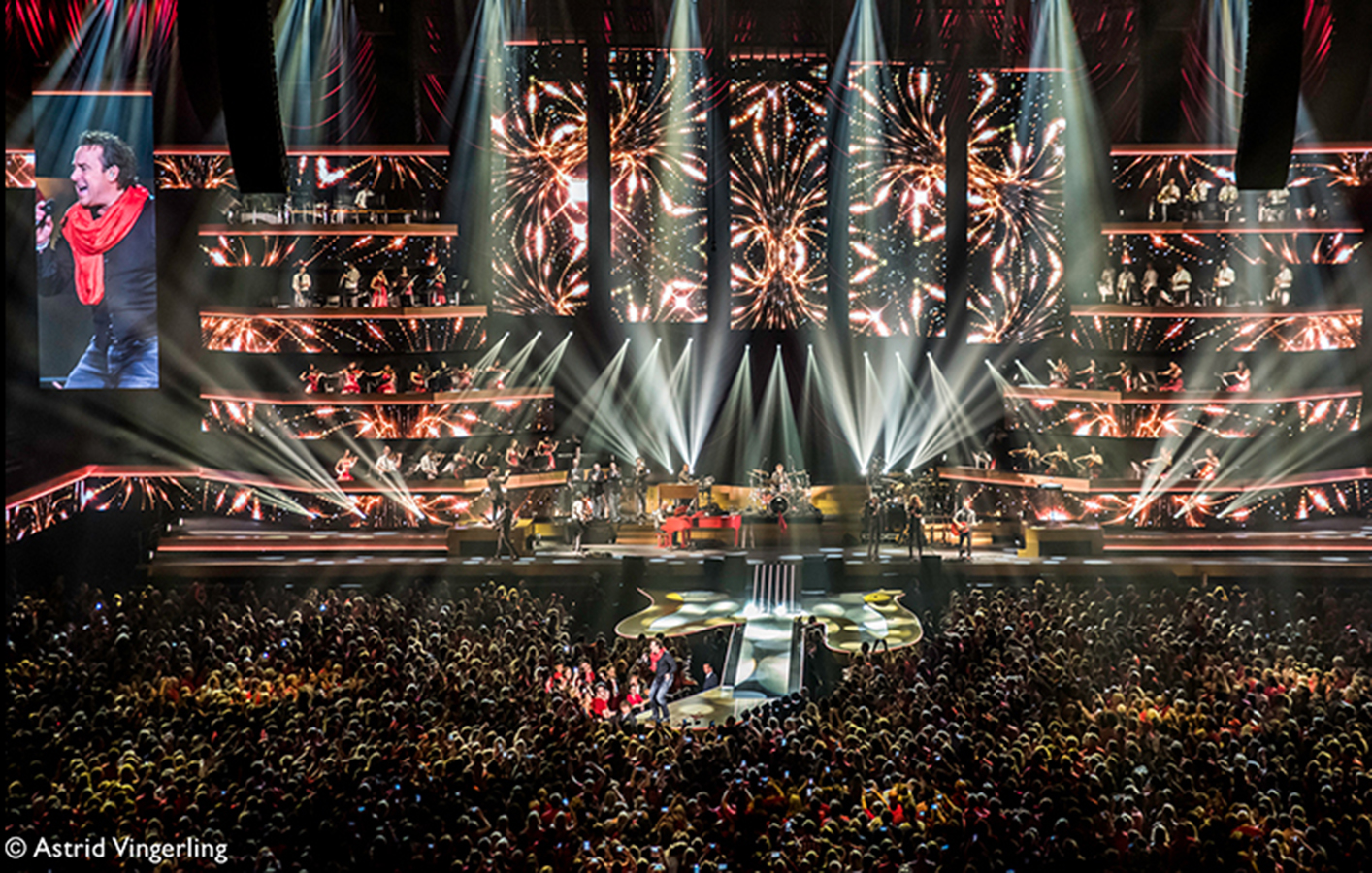 Singer Marco Borsato, one of the most successful and biggest grossing artists in the Netherlands for the past 20 years, returned to Amsterdam’s Ziggo Dome with his celebrated Symphonica in Rosso concert series. During the video-intensive shows disguise partnered with CAST Software’s BlackTrax live tracking and the Notch realtime effects generator to create realtime video effects on the interactive stage floor.

Marco Borsato performs a dozen Symphonica in Rosso concerts annually with a symphony orchestra and guest artists. The most recent series featured six shows in the fall of 2015 and has six more upcoming in February and March 2016 with each date drawing some 17,000 spectators.

The goal of lighting designer Carlo Zaenen was to create “a big theater” look within the Ziggo Dome arena for the first round of concerts. The set design was a clean stage look with LED video banners in front, and orchestra pits to the left and right of the stage. There was also a guitar-shaped catwalk, including a 55 square-meter Kindwin LED floor with BlackTrax interactive video.

disguise has been the server of choice for Borsato’s lighting and video team for a number of years. For the latest Symphonica in Rosso concerts the team deployed four 4×4pros with close to 3TB of content.

“We chose disguise for its flexibility to play interactive content, to follow the artist on stage and to trigger timecode and rapidly visualise high-resolution stage views”

Zaenen agrees that the disguise server's “reliability and proven ease of use on a large show with a complex video set up,” made it the logical choice for the concert series. “We never even thought about using another media server,” he says. “Once we finished the first drawings it was clear to us that disguise would be able to do the job.”

Pauly took advantage of Notch (formerly known as demolition), the revolutionary realtime effects generator, which can be used on request with disguise media servers. Borsato’s team wanted to live track the singer on stage to obtain realtime positioning data on the catwalk. The data would be used in disguise to trigger realtime video effects on the interactive stage floor as Borsato moved up and down the catwalk.

“Through BlackTrax and Notch we were able to simulate the live tracking quite accurately in prepro. We could see how the content would react, how fluid the effect would be. Since there were a lot of surfaces filled with content, it was very helpful to simulate them in a realtime process that required no rendering.”

Pauly says the Symphonica in Rosso concerts marked “the world premiere of BlackTrax and Notch working together on an arena show of this scale. The disguise and BlackTrax combination blend perfectly. We were able to track the artist on stage and reproduce content in position. The use of the disguise content versioning feature was an incredible help in making last-minute content changes without having to reprogram our timeline,” he adds.

Pauly asked for disguise and Notch support during the concerts to ensure smooth delivery of the large-scale shows. “It was necessary because we were also using  newly released disguise r12 software with some custom plug-ins. We worked closely with the disguise team for six months before the concerts began to find the right solution for our live tracking needs, and it was a splendid cooperation!”