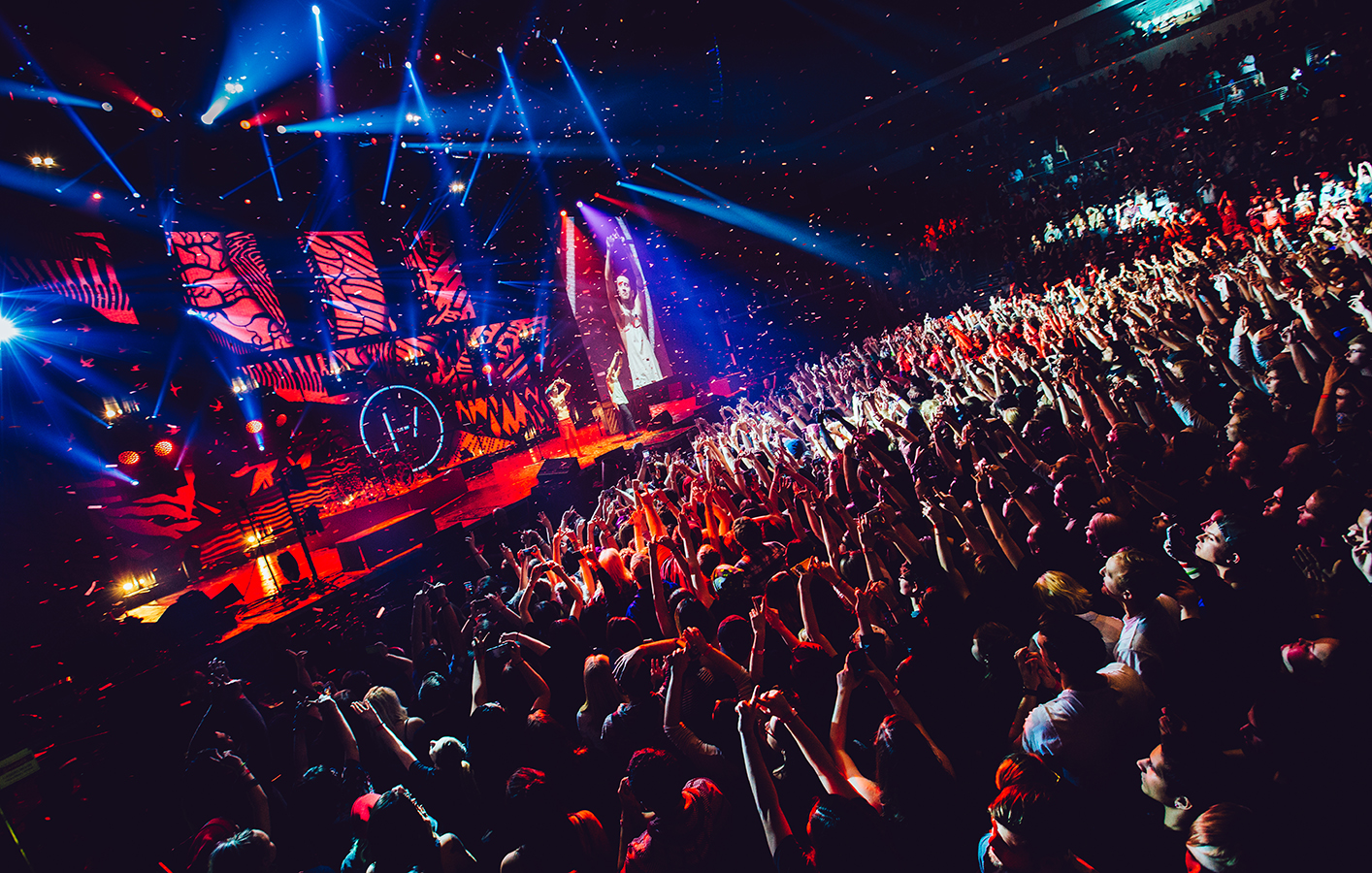 The American musical duo Twenty One Pilots (TOP) have been around the globe with the Emotional Roadshow World Tour, which commenced almost a year ago and wraps up this summer. disguise accompanied the Grammy-winning TOP on their arena tour, which visited Europe, North America and Oceania, feeding video content to an extensive array of LED walls.

“We fed content to the stage LEDs and camera feeds to the IMAGs,” says Sean Green, Video Crew Chief and disguise Programmer/Operator. “The content, designed by Tantrum with heavy input from the rest of the creative team, matched the tone and feel of the songs. Everything was choreographed with the music; it began slowly and built throughout the show.”

Green explains that a single 4×2pro powered the entire show, sending three separate signals of 1920×1080. "One output fed the stage LEDs, another fed the IMAG, the third went to projection for the kabuki reveal at the beginning of the show, the only time projection was used. We also used Notch realtime VFX with disguise to enhance the IMAG.

“And support from the disguise team was great. The US team helped me any time I needed assistance; they were always able to connect me with whomever I needed to answer any questions.”

Before the real stage was even built, Green received vectorworks drawings from the lighting designer and imported them through open source modeling app Blender, producing accurate 3D models for pre-visualization inside of disguise. “That way I could see what the stage looked like,” he said. “I could see the LEDs in the context of the overall stage.”

Green gives kudos to the system’s flexibility, which enabled TOP to step away from the tour and repurpose their video content for an appearance on the NRJ Music Award show in France last November. “TOP didn’t have time to create new content although they had a totally different stage set up for the award show,” he recalls. “So I took the LED maps I got from France, put together the layout of the stage within the disguise software, and adapted our content to that stage. This allowed us to show management what the NRJ show was going to look like on the 3D visualizer. I couldn’t have done that on any other system.”

Green also found it helpful to be able to create different set lists and different versions of the content based on the size of the tour venue. “Sometimes we had to lose some of the LEDs because of the arena size,” he says. “I was able to make each song its own track rather than a total timeline. Then I could create a set list for each [stage] configuration treating them as different shows. If there was a global content change, I took that new content, dropped it in, and it updated all the versions. So we had the songs isolated, and we had multiple layouts for each song. Great flexibility and very helpful for me!”

Green gave Art-Net control to the lighting director as well so he could “have control of the screens on a fader and kill the LEDs on his own if he needed to.”

Coming from a nonlinear editing background, Green found the disguise timeline “very natural and intuitive. I immediately understood how to use it. It was much easier than other cuestack-based systems.”

He says that disguise performed “amazingly well” throughout the world tour. “One thing we never had a problem with was the disguise system,” Green reports.