Tree Of Life installation blooms with disguise at Universal Exposition in Milan.

A timeless design motif combines with 21st century technology in the Tree of Life at the Universal Exposition 2015 in Milan, May 1 to October 31. The interactive installation – a linear tree-like structure of wood and steel that climbs 37 meters high – has been described as a monument, a sculpture, a building and a work of art. The LED lighting, projections and special effects illuminating the Tree of Life were enabled by the disguise software and a 4×2pro media server.

The Universal Exposition has the dual themes of feeding the planet and energy for life. It explores how technology, innovations, culture, traditions and creativity relate to food and diet worldwide. The Tree of Life was created by a consortium of Italian businesses and serves as the centrepiece for the activities of the Italian Pavilion. It is located in Lake Arena, a 90-meter wide pond with a seating area for 3,000 people and concentric circles of trees. The Tree of Life comes alive with daytime shows featuring music by contemporary Italian composers and evening shows specially scored for the Expo. LED lighting, projections and special effects combine with dancing waters to charm visitors of all ages. 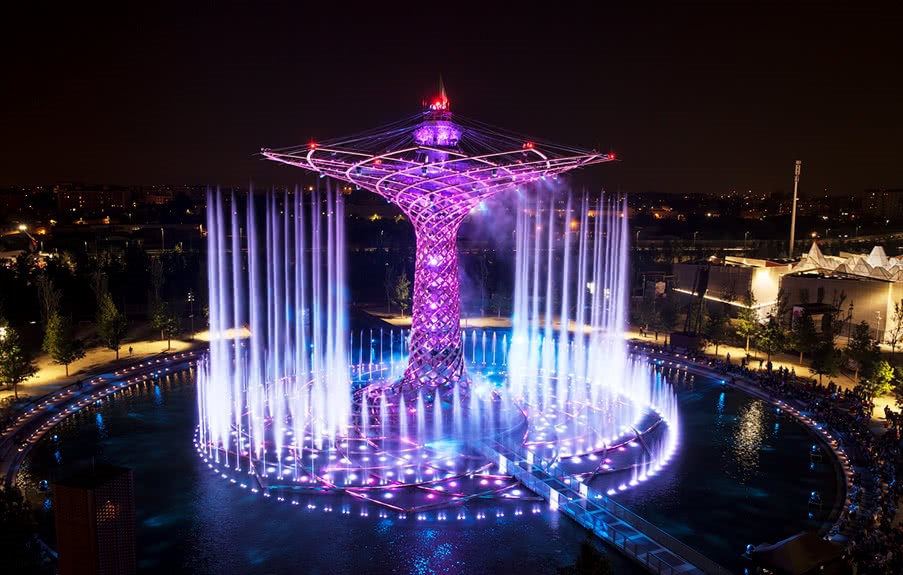 Marco Balich designed the Tree of Life, inspired by drawings by Michelangelo, and serves as artistic director of the project. Koert Vermeulen, principal designer with ACT Lighting Design in Brussels, is the installation’s visual designer and director.

The moment we decided to put projections on this intricate structure with all the warping elements, it was obvious that the only server that would be able to do the job was disguise,” says Vermeulen. “disguise has a unique design philosophy that starts from an object and what you want to put on it – it doesn’t start with outputs. That’s a great way to work.”

One of the things he liked best about disguise was the pre-visualisation process. You can visualise what you’re going to get in a reasonable quality,” he says. “When you need to build things and develop a workflow and methodology, the disguise visualisation really helps you decide things long before you have to actually implement it.”

"The disguise QuickCal calibration feature was a real time saver. Once we remade the model of the tree and had all of our vertices in the right place, results were quickly achieved with QuickCal. After the first show day and alignment we exported all the projector feeds to a number of simpler playback devices to keep it running for six months.”

Jo Pauly of Visual Solutions, in Hoeilaart, Belgium, spearheaded the disguise previs. “The server’s strong simulation tool was very helpful in the pre-production process. We combined a lighting simulation software for the lighting, with Synchronorm, for the fountains, to give a good understanding of the actual show,” he reports.

“In the beginning, we were to use disguise to combine the projection mapping with driving 600-plus Art-Net universes – something we could work out in previs in advance,” Pauly explains. They programmed, calibrated the projectors and ran the first Tree of Life show with a 4×2pro.

The Tree of Life team appreciated the disguise flexibility and ease of use. The only thing that “took a lot of time,” Pauly notes, “was recreating the tree in a disguise-suitable format and dividing 300-plus universes over an enormous amount of LED strings on the tree. That was necessary because we wanted to have a very realistic pre-visualisation of the visual effects. We had disguise support from the beginning to facilitate the process of outputting that many Art-Net universes at once without collisions.”

Lex ter Heurne from By-Lex in Cologne, Germany, worked on the disguise project set-up and performed the on-site programming. “Jo and Lex were instrumental in making it all happen while I was focused on the end product,” says Vermeulen. “disguise got me what I needed when I needed it. That’s very comforting for a designer – it doesn’t happen a lot.”