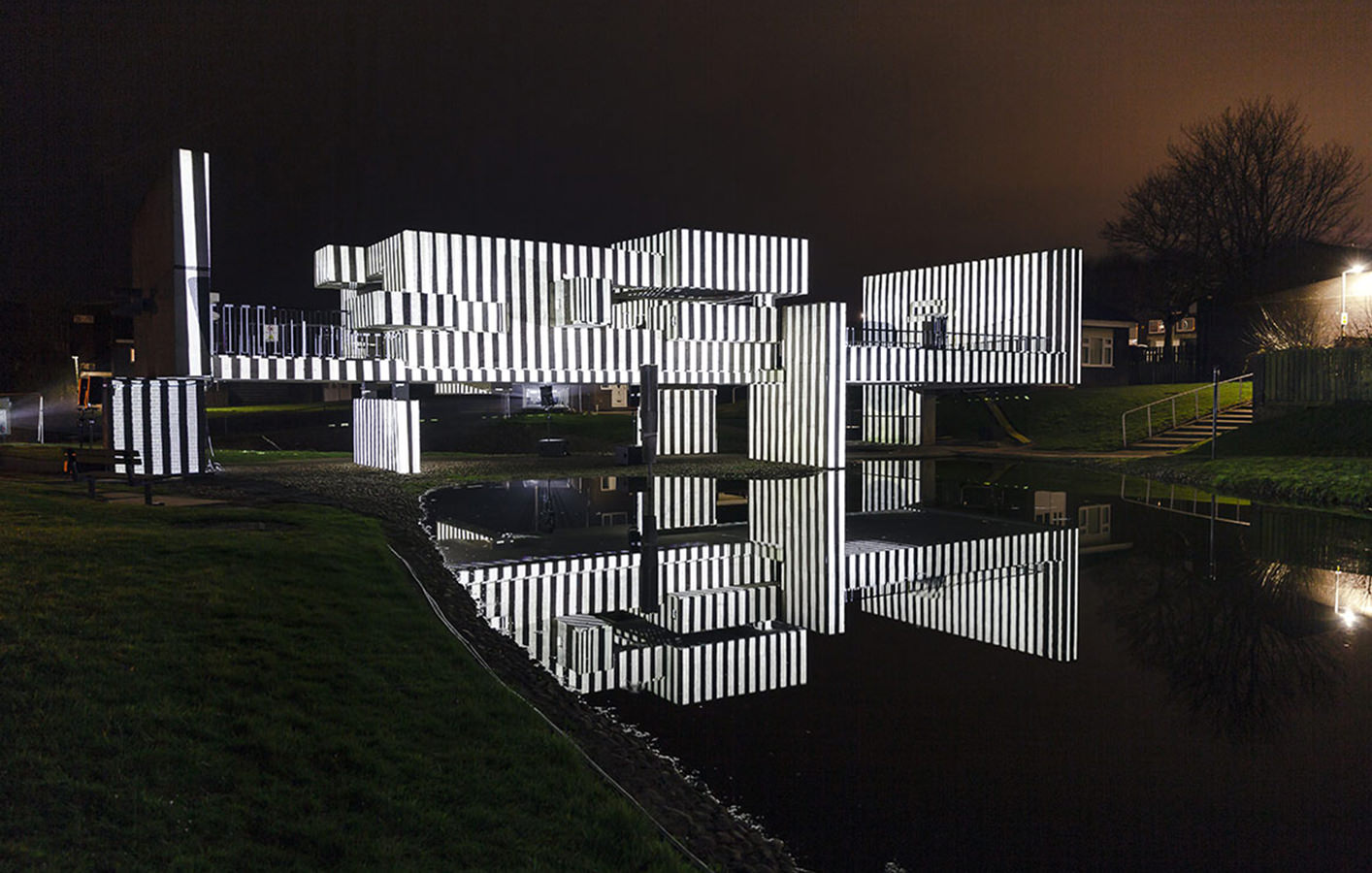 Produced by Artichoke Trust, Berlin-based artists Mader Wiermann and QED Productions were tasked with delivering a 360-degree video projection and soundscaped artwork for the Apollo Pavilion on the Sunny Blunts Estate, Peterlee, County Durham. Commissioned by Durham County Council as part of Durham's Year of Culture, the projection took place over two nights in March 2019 and was a free public event advertised on local news networks.

Constructed in 1969 by Victor Pasmore, the Apollo Pavilion is one of the UK's most famous and controversial brutalist artworks which was restored and granted Grade II Heritage Status in 2011. Entitled 'Apollo 50', Holger Mader and Heike Wiermann's work commemorated the 50th anniversary of the public sculpture's construction and the Apollo space programme that inspired its name. The Pavilion spans a small lake, providing a pedestrian link between the two halves of the estate, and remains a rare UK example of the symbiosis between art and architecture.

Bringing such a large-scale projection piece into the heart of a residential estate presented a number of unique creative and technical challenges, so the technical planning considerations and content creation process were inextricably linked throughout. Due to the physical restrictions of the site and the low level of mains power available, the 25m wide building had to be covered on both sides by only four projectors and from a limited range of positions on each side of the lake.

A 3D model was produced, having been generated from old architectural plans. Therefore without a fully verifiable model and in the absence of any surrounding topographical data to determine the precise physical projector positions, a baked UV content workflow had to be devised within Cinema 4D. This provided a fully content-wrapped model so that the virtual projectors could be positioned accurately on-site within the disguise software as soon as the precise real-world projector positions and elevations had been discovered.

The baked UV workflow was settled upon after the simulations showed the number of surfaces that would be obscured from the four projectors covering the sculpture, and this allowed Mader Wiermann to adapt and approve the content looks. The artists incorporated the UV workflow to create an array of perspective illusions, spatial lighting effects and bold animations that utilised the brutalist sculpture's complex shapes. The looping 8-minute video incorporated 3 channels of audio (LCR) with the soundscape being designed to follow the movement of the 60fps content across the sculpture, with all assets being played back from the disguise 4x4pro server. 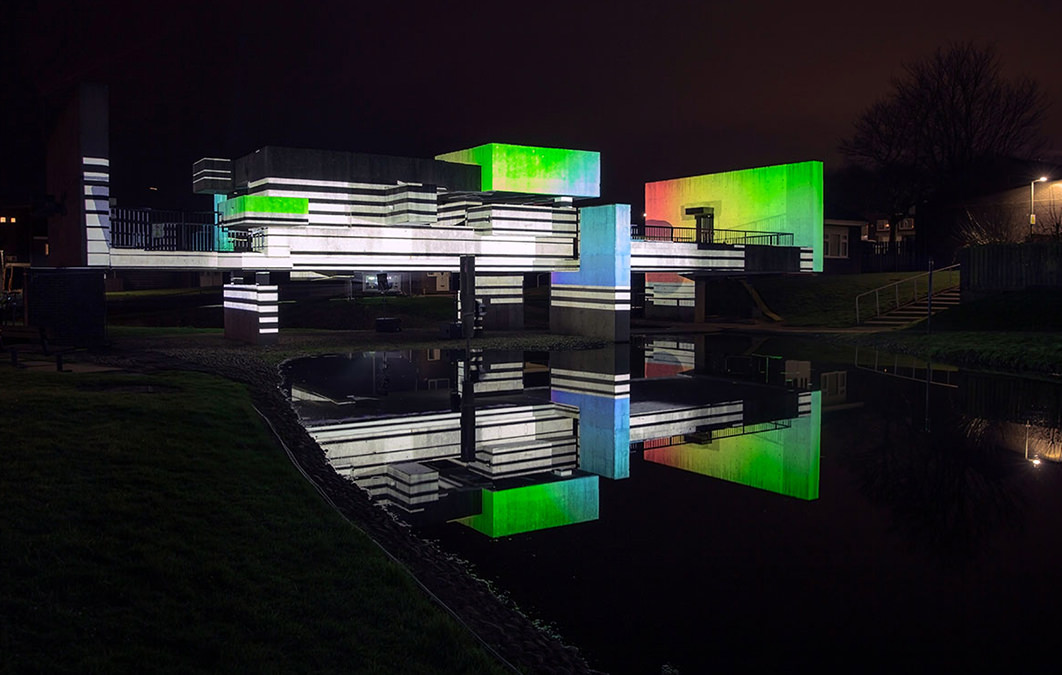 The team were able to pre-vis how QED's RZ21K laser projectors were to be positioned in the outdoor enclosures was a key element in the success of the project. Fly-through and workflow simulations were instrumental in communicating rapidly with the artists, highlighting any potential on-site complications so that they could begin their content rendering process.

QED Project Manager Simon Graham remarked "It was such an interesting project and wonderful to be able to work so closely with Holger and Heike. We really learnt a lot from each other in order to develop an innovative workflow for projection mapping this unique building". 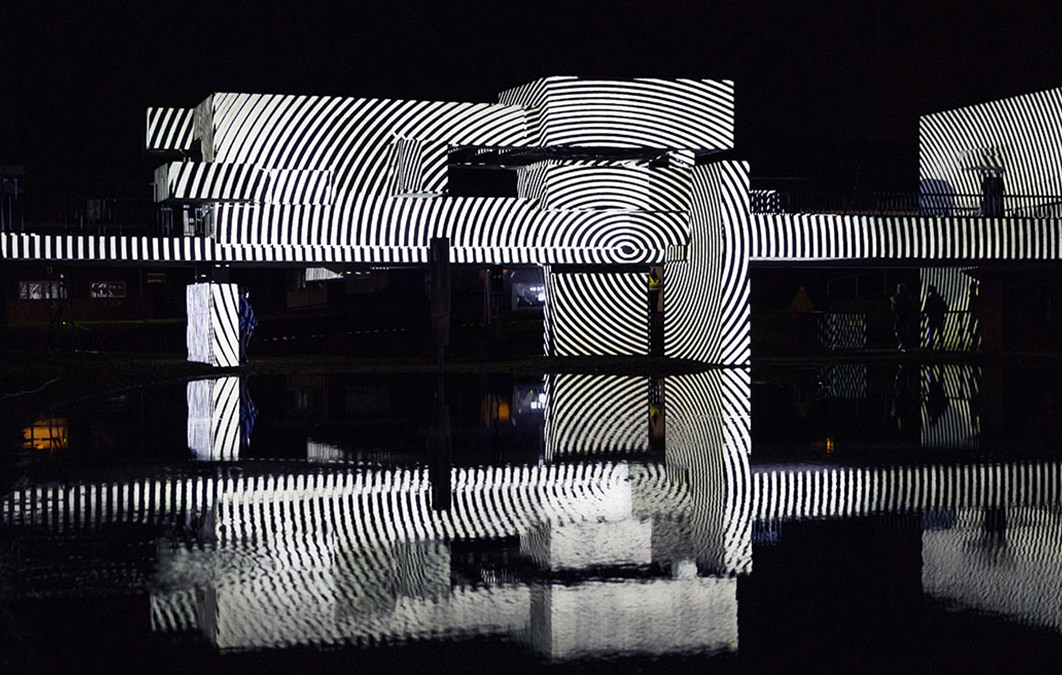 "The Apollo Pavilion almost looks as if it was built for a projection mapping, however, the deeper we got into the detail the more we discovered how difficult it was, especially when having to work with a model created from unverifiable data. It required both a custom workflow and all the technical tools in our projection-mapping arsenal to pull it off."

Due to the close proximity of homes, there was a curfew of works in place which meant that (including sunset) mapping time was restricted to only three and a half hours over two evenings. The limited window of opportunity was only able to be properly utilised because of the pre-production workflow that had been developed between the content output from Cinema 4D and the show delivery simulated within the disguise software.

For the full article visit

A detailed history of the sculpture can be found here

Find out more about the artists