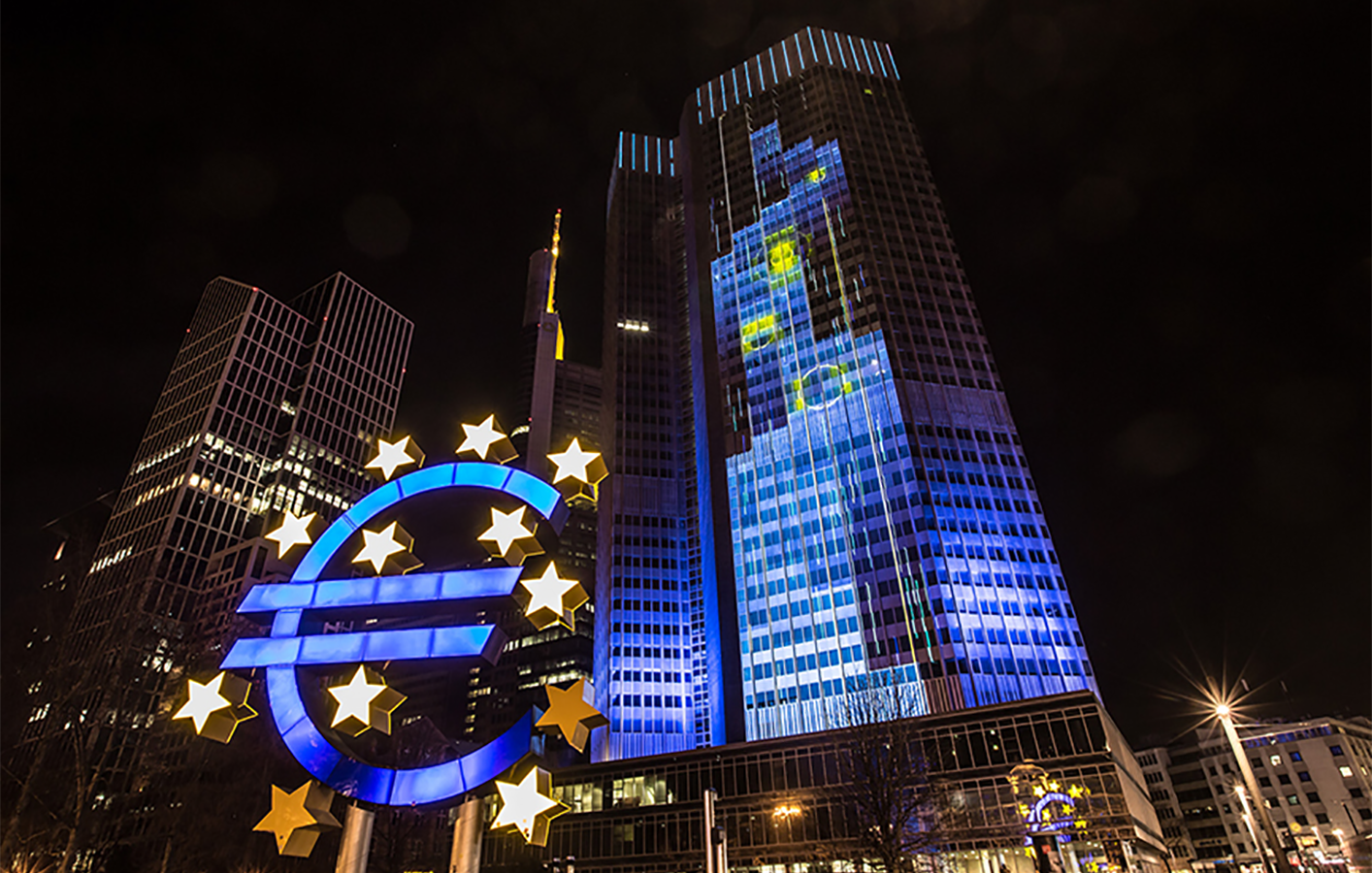 The European Central Bank (ECB) took the European Union’s motto, “United in Diversity,” as its theme for its participation in Luminale 2016, the biennial light show in Frankfurt, Germany. Creative events solutions company bright! Gmbh designed lighting and video installations for the ECB’s two buildings selecting disguise 4×4pros for the core of the technical systems.

The eighth celebration of Luminale featured some 200 light events in Frankfurt and Offenbach. For five days in March the ECB’s main building on the river and Eurotower in the city center were illuminated from 8 pm to midnight with the yellow and blue signature colors of the EU. The iconic Euro currency symbol was projected onto the south façade of the main building along with a visual reference to the Eurotower installation. One side of the Eurotower was mapped with a graphical performance of Beethoven’s “Ode to Joy,” the European anthem. Animated bars reacted to the key tones in the music, circles to specific tones, lines to the key tones and bars, and the background to the kettledrum. Over the duration of the anthem each tone was visualized through one of these elements.

“The ECB gave us the freedom to work out an artistic concept within certain boundaries they presented,” says Michael Giegerich, managing director of bright! “The ECB wanted its contribution to Luminale to have something to do with European values and to use both of their buildings.

“We created an algorithm in processing that created audio-reactive visuals on the basis of the ‘Ode to Joy’ then added some parts over it that we designed non-generatively,” he explains. “This design was altered by cultural data dealing with Europe’s diverse society. All of the designed elements relate to the special architectural structure of both buildings, which are rather iconic landmarks on the Frankfurt skyline.”

The bright! team, under head of technical production Axel Lambrecht, deployed 28 Panasonic PT-DZ21K projectors, two active 4×4pros and one additional 4×4pro back up for the Eurotower installation. Six Barco HDF-W30 projectors and an additional disguise 4×4pro were dedicated to the main building.

“We selected disguise media servers for their easy set up, high performance and ability to send Telnet protocol to grandMA2 control consoles to trigger the lights,” says Lambrecht. He also cites that disguise has “very fast alignment, high-resolution playback at 1920×9028px, and matrix presets.”

“disguise gave us the freedom to perfectly map and interact with the buildings’ structure,” Giegerich adds.

He notes that disguise also played an important role in previs sessions with the ECB “to explain how the created artwork would interact with the building and what the overall look would be when it came to the speed of the graphical installation. Since the building is very big that was an issue we had to watch carefully.”

Lambrecht found the disguise QuickCal feature for speedy projector alignment especially helpful. “The process didn’t require more than 90 minutes for a projection surface greater than 25m x 120m,” he says. “We sent UDP/Telnet from the timeline into the grandMA2 to trigger different sequences. And network set up for the multiple disguise servers and additional outputs were easy to handle.”

The disguise systems performed “perfectly, with no problems,” Lambrecht reports. “Despite the high resolution of the content and surfaces and a computationally intensive output distortion the disguise systems were not at all limited.”