disguise at the centre of Game of Thrones Live Concert Experience.

“Game of Thrones” fans were given another outlet for their favourite show when the “Game of Thrones Live Concert Experience” played a 24-date arena tour across North America. The tour featured the show’s composer, Ramin Djawadi, conducting a 35-piece orchestra and choirs performing highlights from the score. The 360º stage was rich in visuals and dynamic movement; disguise media servers tracked automation and drove the display of video content from six seasons of HBO’s epic fantasy series.

The just-concluded tour opened in Saint Paul, Minnesota in February and wrapped up in Portland, Oregon in April. To mirror the television show, the stage design was made up of Seven Kingdoms. The main stage (King’s Landing), featured Djawadi, the orchestra and a choir. A runway, also for performers, was then linked to a second stage (Winterfell) on the other side of the arena, which also featured a choir. Four smaller stages were then used, each named after different locations from the Game of Thrones world.

Massive LED screens were suspended above the stages, nesting octagonal screens that looked like inverted wedding cakes with sections that moved up and down.

“It was an exciting new venture and quite unique,”

San Francisco-based, Lucid, provided technical design consultation for the tour, including disguise programming, management and system design. “It was an exciting new venture and quite unique,” says Nick Fletcher, director of Lucid. “The in-the-round stage symbolised the seven kingdoms of the show. There was a lot of automation tracked in disguise on the stage and lots of video content driven by disguise. No other media servers could have done the dynamic mapping and automation tracking required for the show.” 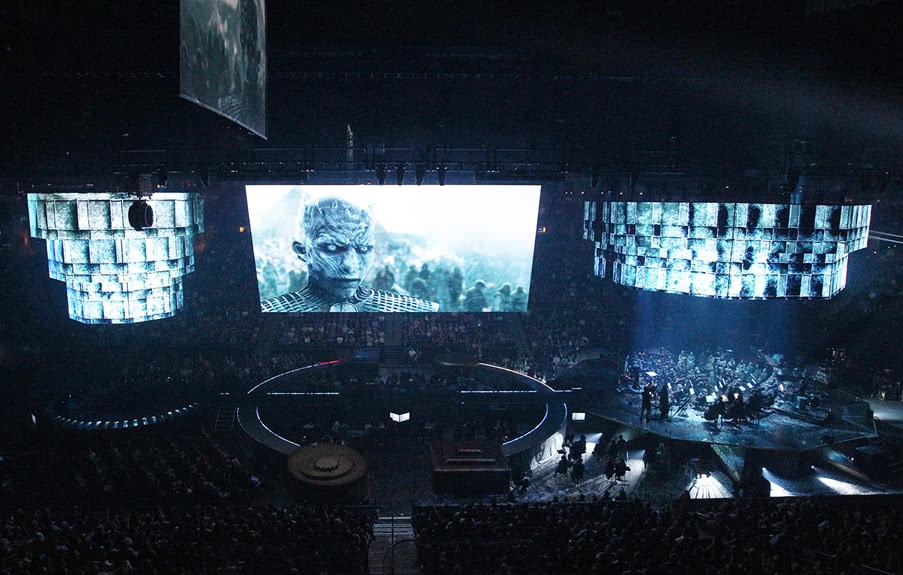 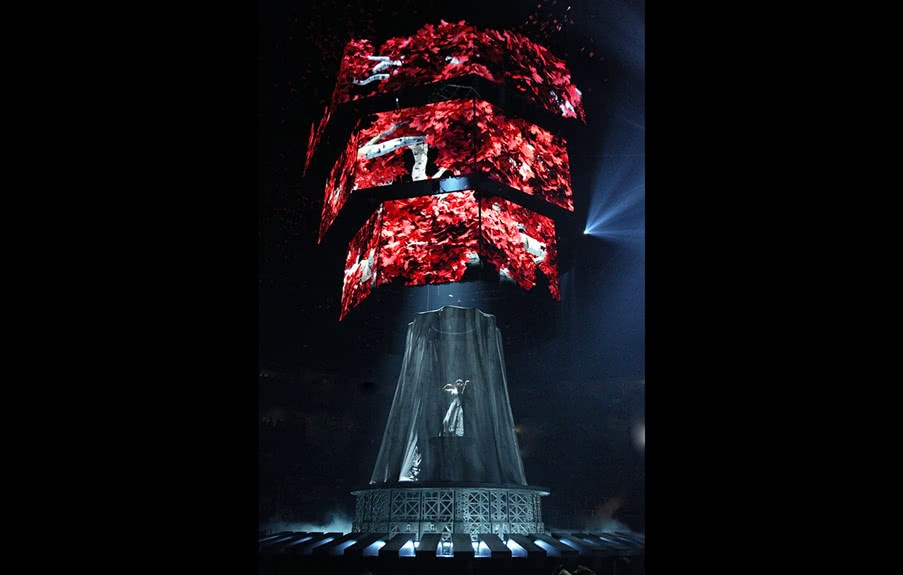 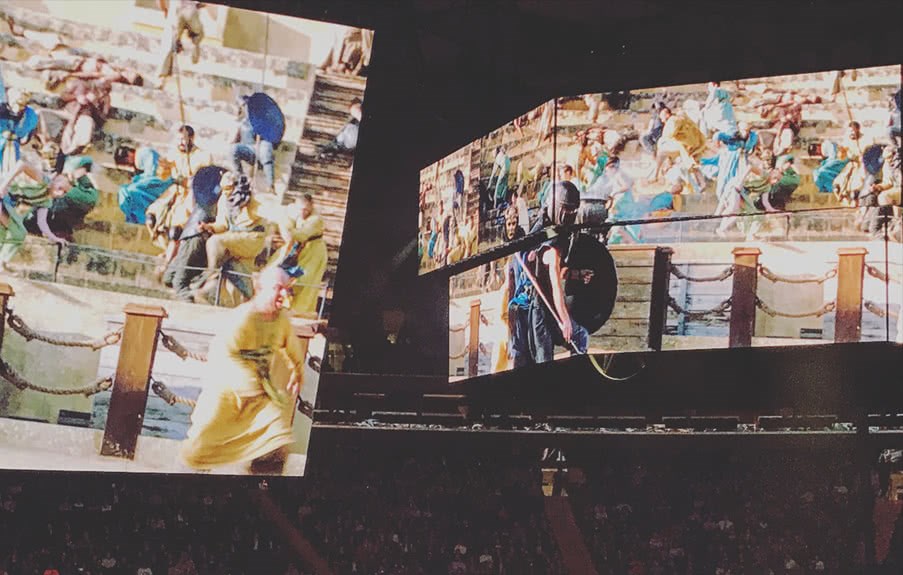 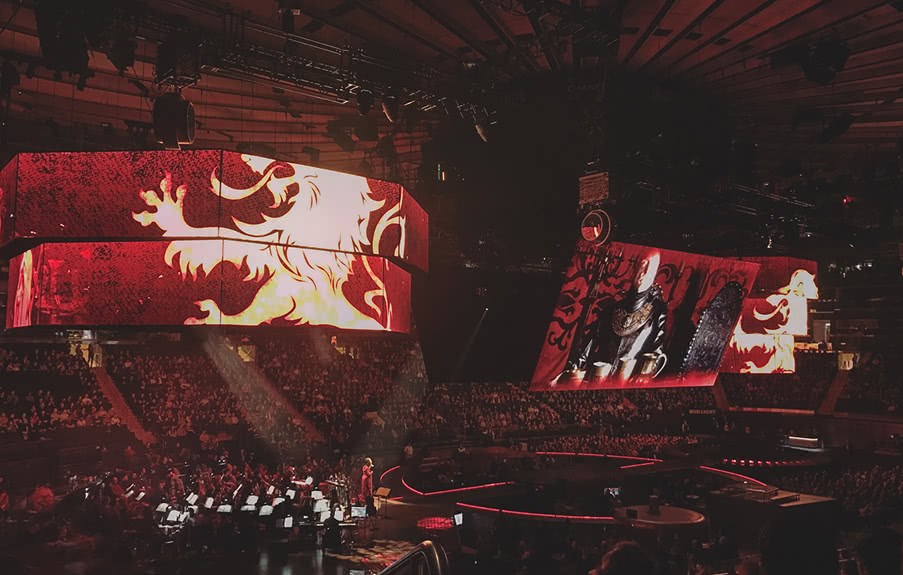 The in-the-round stage symbolised the seven kingdoms of the show. There was a lot of automation tracked in disguise on the stage and lots of video content driven by disguise. No other media servers could have done the dynamic mapping and automation tracking required for the show.

Fletcher specified three 4x4pros with SDI VFC cards; one pure master and one output machine ran the show whilst the third system served as an understudy. VER supplied all equipment required, including the disguise servers. Ken Delvo from VER was the disguise operator for this project. Lucid, also worked closely with SRae Productions, which provided the overall scenic and show design.

Fletcher teamed with Nashville-based Matt Geasey during prepro at VER Los Angeles. “Matt took care of all the lighting previs, the modeling and fixture profiles,” says Fletcher. “We merged MA 3D and disguise for unified lighting and video previs and programming before the show.”

Fletcher says the tour, “pushed the boundaries when it comes to touring systems – this was the first tour with an IT department! There were managed switches creating a 40-gigabit network linking every department so that everyone had unified access to network protocals across departments, from every location. We had a unified communications system for talent and crew, also riding on the same network.

The disguise Multi Transport feature asynchronously drove the main show content and the streamers for the orchestra. “Since the orchestra was different for every city on the tour, having streamers, like a live scoring session, was key to first-time performers of the music,” Fletcher explains.

The dynamic tracking masks that Lucid built in disguise were essential in preventing video from bleeding onto the concentric tiers of the octagonal screens. And disguise tracked the show’s live automation data.

Fletcher and his team used disguise r14.2 in beta, working directly with the disguise developers to fine tune new features and assure rock-solid performance. “We used Creative Sequencing on the timeline and a lot of advanced mapping to wrap the scenic design in video, largely consisting of footage from the TV series, as it was not built to be displayed on the scenic surfaces,” he notes. “Drew Findley and Dirk Saunders, the lead creatives, did an amazing job recutting the show footage for the tour.”

When the scenic design changed we didn’t have to reformat all the content: We did it all in disguise

The flexibility of using disguise came into play with the show’s evolving design. “When the scenic design changed we didn’t have to reformat all the content: We did it all in disguise,” Fletcher notes. “Absolutely no other media server could have reacted that quickly to making global changes.”

Fletcher says Lucid values its relationship with disguise developers, who remained “in constant contact” during the tour. “We really put disguise through the wringer with a big show like this,” he says. “But we’re very proud of the results and the fans just loved it.”