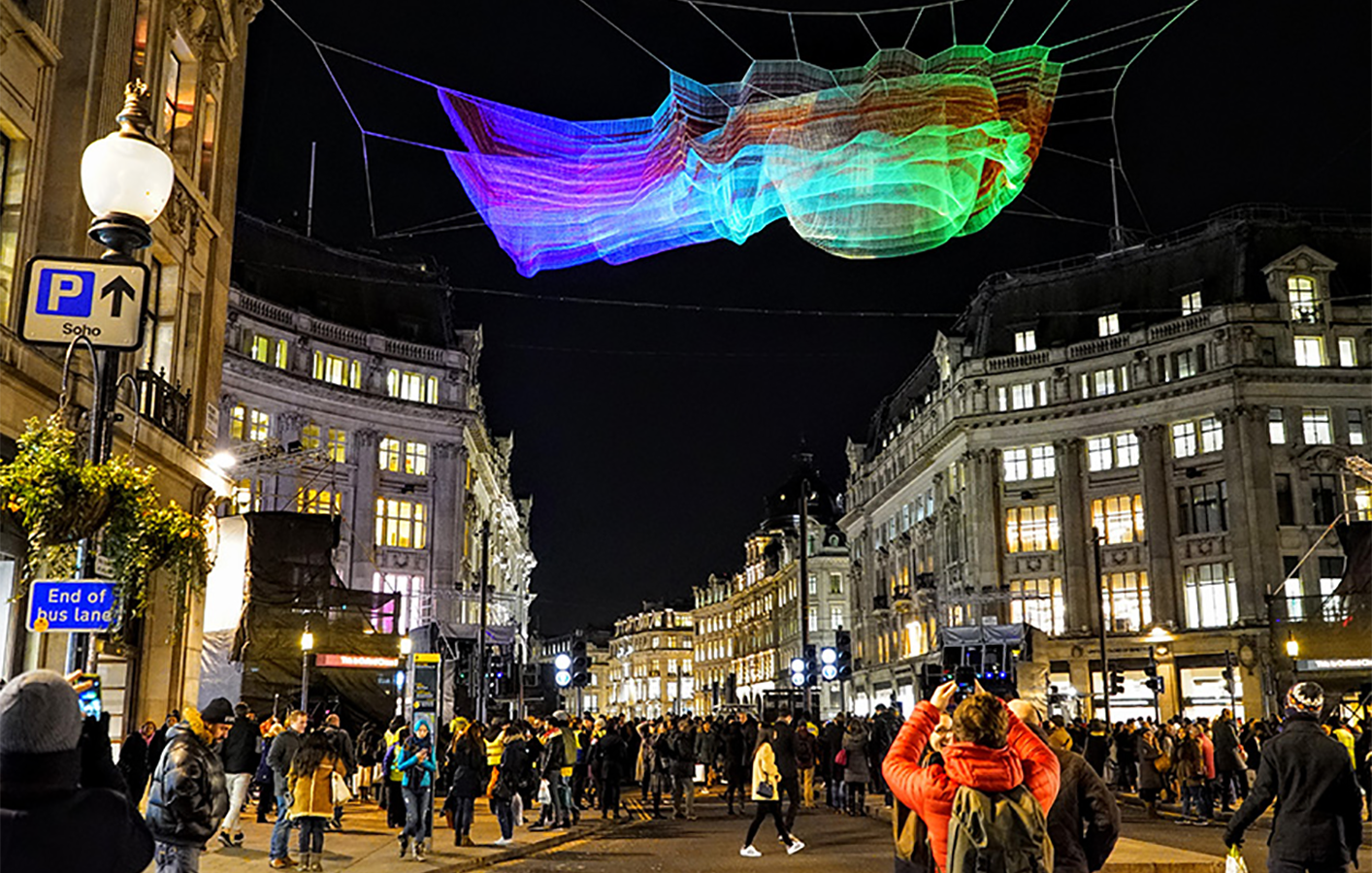 Lumiere London lit up the winter streets of the capital with an installation of 30 illuminated artworks by a contingent of international artists. Two of the installations, at Oxford Circus and on the BAFTA façade, featured disguise creative solutions deployed by QED Productions.

Produced by Artichoke, Lumiere London was the biggest light festival ever held in the city. An estimated one million people came to the free outdoor event. Working with a large team headed by Unusual Rigging, QED Productions provided all the video projection equipment and services for the installations.

QED opted to use 4×4pro media servers for Janet Echelman’s stunning fiber sculpture entitled, “1.8.” Soaring 180 feet above the ground between buildings at bustling Oxford Circus, the sculpture takes its name from the amount of time – 1.8 millionths of a second – by which the day was shortened when the devastating Japanese earthquake and tsunami hit in 2011. The artwork was inspired by data sets of the tsunami wave heights and represents the interconnectedness of all elements. It came to life over Oxford Circus when the public, using smartphones, interactively chose the colors and patterns of projected light.

“This was such a high-profile event that we simply had to provide the very best media server,” says Paul Wigfield, director of QED Productions. “We chose 4×4pros because they not only provided the requisite number of outputs, the best performance and the greatest flexibility on site but also because they enabled us to previsualize the project and work out how to deliver the highest amount of brightness and pixels.”

Wigfield believes that the disguise previsualization and ability to plan projector placement “is the most advanced” of any comparable products and systems. “disguise does it all better than anything else. We were able to bounce ideas off ArtAV in order to plan the best projector configurations and lens choices,” he explains.

QED chose six Christie 10,000-lumen projectors and 4U v.2.5 server system for “195 Piccadilly,” the installation by creative studio NOVAK. The large-scale projection mapping on the façade of the BAFTA (the British Academy of Film & Television Arts) headquarters explored different genres of film and TV using their photography archive. The animation’s aesthetic referenced the building’s origins as the home of the Royal Society of Watercolour Painters.

The 4U v.2.5 server played back the content and allowed QED to previs projector positions and check that two tall lamp posts, which might have blocked projector beams, would be avoided.

Lumiere London was “a fluid art form that was affected by many environmental variations, so we knew disguise real time adjustment and control features were always going to be very useful indeed,” notes Wigfield. “The systems were an absolute breeze to use and performed perfectly.”