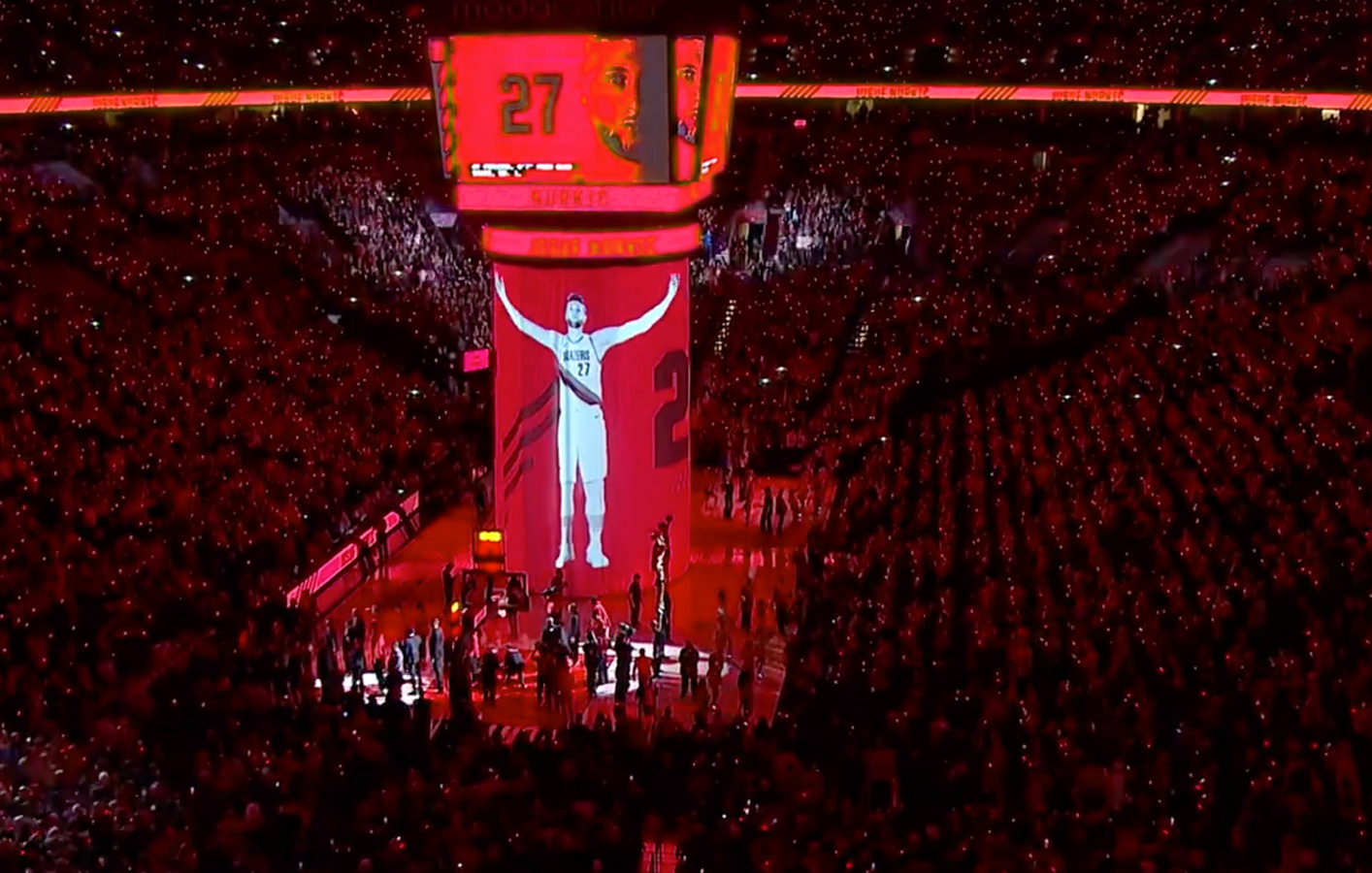 The Portland Trail Blazers’ innovative pre-game show for the NBA Playoffs wowed fans in every seat of the Moda Center with dynamic, superhero projections achieved with the support of disguise 4x4pro media servers. The disguise systems showcased their flexibility and utility to deliver fan-favorite content for all types of national sporting events.

“Many of the creative options available in an NBA pre-game environment did not pass that test, so Craig Winslow of Craig Winslow Studio and the Trail Blazers’ Billie Olson conceptualised a 360º projection cylinder that would fly in from the scoreboard and disappear just as fast as it entered.”

The magical effect began after the visiting team was introduced. “A kabuki curtain release system was used to reveal the cylinder from its position tucked away below the scoreboard,” Luke Buchanan, Lead Technician at MeyerPro who served as disguise Systems Designer and Operator explains. “Projectors from each corner illuminated the canvas for a seamless 360º video intro including highlights from the Trail Blazers' season. The concept was to tell a story of the team and fans coming together aptly set to Junkie XL's remix of the Beatles’ song, ‘Come Together.’ We also wanted to make sure the 35-foot-tall screen made the players ‘larger than life,’ in superhero form, as they walked out during intros.”

“The Trail Blazers’ Creative Services & Game Entertainment staff were looking for a fresh pre-game intro look with a long-held belief that the experience should have the same impact from the floor to the 300 [tier of seats] level,” says Luke.

As starting lineups weren't released until shortly before the game, “we had all possible starting players available on our timeline and chased house timecode to follow their starting lineup,” says Luke. “Once the intros were finished, the fabric was released from the scoreboard, dissipating down to the floor with the projection following the screen position, dropping and going dark.”

He points out that “the projector position and blend projection features on the cylinder meant that our warping and blending was 90 percent there before the projectors were even hung. This was important because of the extremely narrow window we had to execute this job.”

Luke says that the NBA “requires a very quick turnaround time from any pre-game look to tip-off, so any design used has to be fully mobile and out of the way so the refs can get the game started. With this narrow window to accomplish a look and tell a story, we had to use a material that could appear from nowhere, and get out of the way just as fast with the help of a team of stagehands on the ground.”

He notes that, “each drop of the cylinder screen took roughly one hour to reset and, with the screen down, all court operations had to be at a standstill since the screen floats onto the floor at half court. This gave us only a few moments in each cycle to walk the arena and touch up the warp and blend. I was able to take a disguise Designer license out wirelessly on a laptop to apply those changes from different seating sections.”

Luke notes that disguise was chosen for its ability to provide “a robust solution that offered stability, flexibility and functionality on a tight timeline.” He deployed one 4x4pro as a master system and the second as an understudy.

In pre-pro, “once we loaded the Moda Center in as a venue, we were able to host flyovers and offer proof of concept for the job,” he explains. “This allowed us to look at sight lines and consider where on the canvas content should be rendered and get all of the snapshots, video, flyovers and even VR walkthroughs needed to make sure this concept would deliver.”

The Designer license enabled him to “previs without servers.” And the Advanced Projector Toolkit “helped us survey our projector locations, verify lensing and handle our overlaps, blending and warping with ease,” he reports. He also gives kudos to disguise’s HAP playback and streamlined UV mapping.