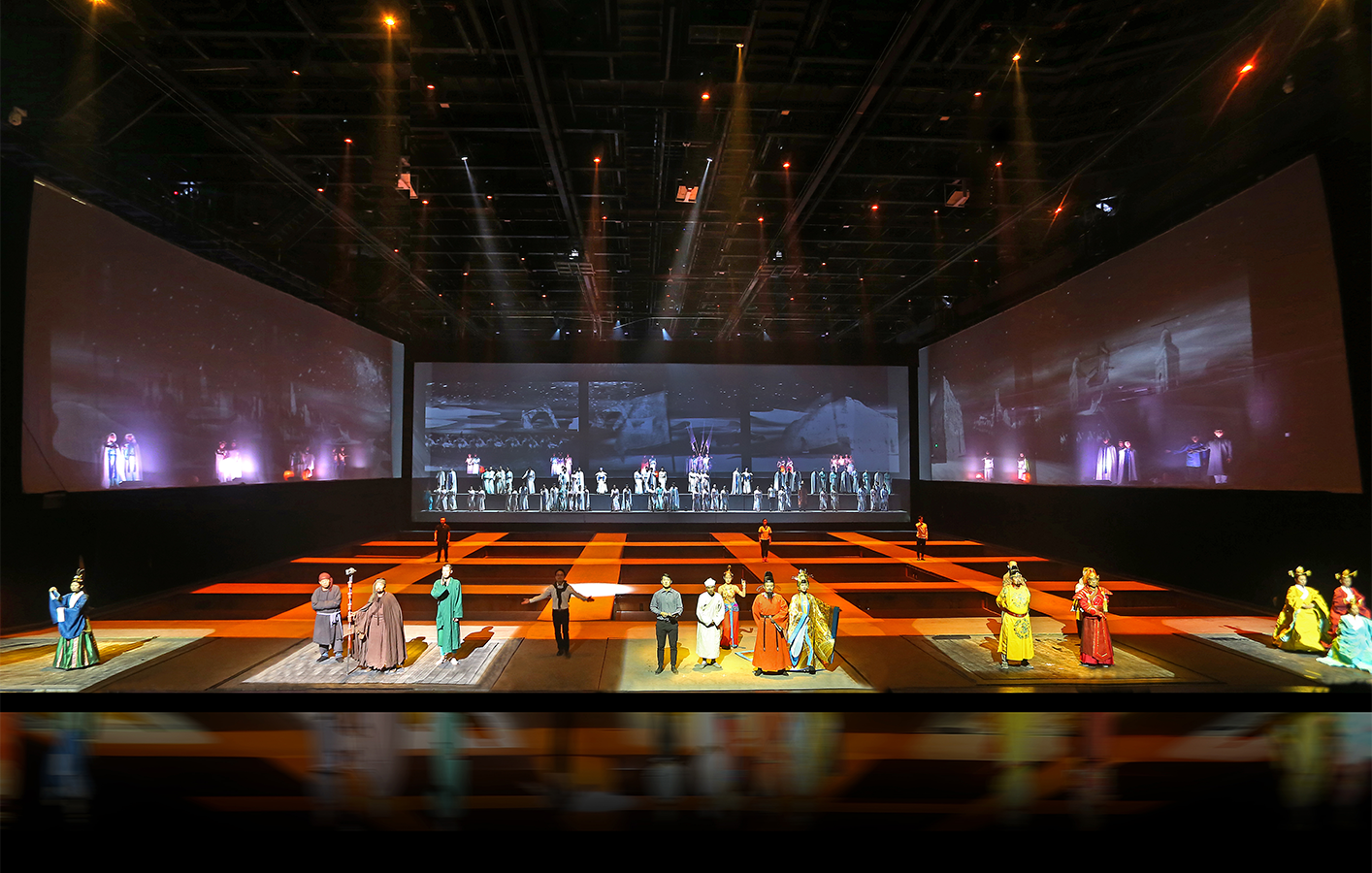 China’s “Encore Dunhuang” Travels Through Time with Support from disguise.

A single machine stably controlling nine projectors at the same time was quite impressive. It saved space and wiring time.

The immersive Chinese theatre piece, “Encore Dunhuang,” debuted at the first Silk Road Dunhuang International Cultural Expo. The long-awaited show was directed by one of China’s most famous directors, Wang Chaoge, who was the co-director of the opening ceremony at the 2008 Olympic Games in Beijing.

The 90-minute performance gives audience members a chance to travel through time, as they walk through four zones and experience key moments and characters in the 2,000-year history of the city, once an important stop on the Silk Road. It is staged in The Aqua Blue Theatre, a large glass structure that looks like a water droplet poised in the vast Gobi Desert, where the disguise media server assisted with show previsualization to display stunning video projections.

“The disguise 4×4pro media server was chosen for their previs capabilities and for their 16 HD outputs,” explains Hank Liu, Technical Manager of Redline, disguise Sales Partner in China. “That a single machine could stably control nine projectors at the same time was quite impressive. It saved space and wiring time.”

The disguise system was able to simulate the entire production before any equipment was set up in the theatre. “First, we created the 100 percent precise 3D model for the project,” says Hank Liu. “Then we started to create the visuals and present the pixel-perfect simulation to the Show Executive Director and the Visual Technical Director. They were happy to oversee the show design in previs without the need to go on site, saving a lot of time and effort.”

Denimen Liu, who handles stage design and technical supervision for Impression Wonders Arts Development Co. Ltd, as well as the Visual Technical Director of Encore Dunhuang, agrees. “QuickCal was impressive, especially for a show like the Encore Dunhuang. In addition, the system is pretty easy to operate.”

“In the concept design phase of the project, the disguise previs helped us tremendously in evaluating projector placement, lens selection and content preview,” says Denimen Liu. “disguise is also an ideal playback system with strong output support. We have a wide projection surface so it’s divided into three parts; we employ nine 7300-lumen Barco projectors with three overlaps to provide continuous coverage. Thanks to the disguise fluid playback and impressive output, the intensity, pixel density and edge blend all work perfectly across the surface.

“The blending and masking features of disguise help simplify the content design process allowing us to adjust and customise the content template, while precisely correcting the output feeds,” adds Denimen Liu. “This streamlines our entire workflow dramatically.”

Hank Liu says the disguise system was easy for the technical crew to master. “I spent four or five days teaching two people with no basic understanding of the product to use it skilfully.”

Denimen Liu adds that, “the Redline team is really experienced and has the most advanced mapping skills in the market. And their support was 24/7 – really excellent.”