Dave at the BRIT Awards

Racking up a huge viewership on the night and two million views on YouTube [at time of press], Dave’s impassioned performance at the BRIT Awards made headlines across the nation. Off the back of the performance, TPi sat down with TAWBOX Creative Directors, Bronski and Amber Rimell.

“Bronski and I have been working for Dave for a year now, first collaborating with him on his Psychodrama tour,” began Rimell, talking about TAWBOX’s history with the artist. Once the creative duo were told that Dave wanted to perform his track Black, they began devising a creative concept to accompany the performance.

“We suggested the idea that Dave and his Musical Producer – Fraser T Smith – should face one another, while both playing separate pianos,” added Bronski, explaining how the surface between the two performers became the canvas for TAWBOX to explore the idea of projection mapping.

“Personally, I had always wanted to work with projection as a creative idea,” stated Rimell. “I created mood boards and worked in-depth at the visual aspect, aligning with and dissecting Dave’s lyrics into very small sections for the 2D and 3D world so a narrative could be seen throughout.”

Bronski designed the piano for the performance – “something I never thought I’d do,” he laughed. “I wanted a projection on top of a piano, a one-shot steadicam delivery and content to be rendered from the lens, tracked in real-time.” 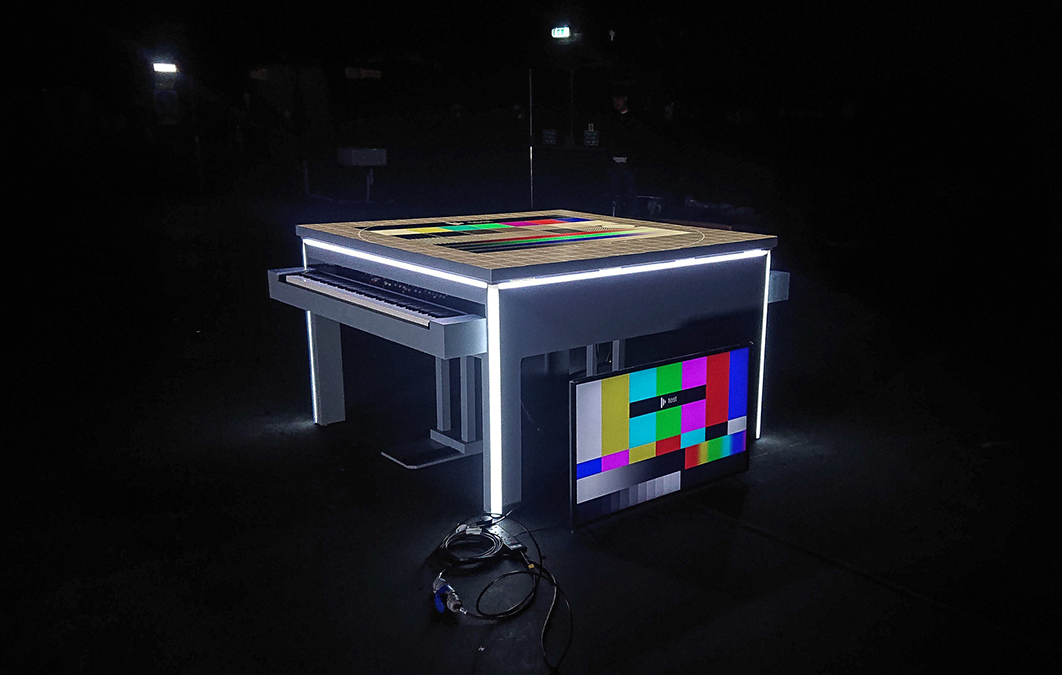 The advent of three fairly recent advances were all needed to pull off this production – namely disguise media servers, Notch real-time rendering and 3D tracking devices, Mo-Sys Engineering. “We were delighted to commission Bluman Associates and Stout Studio to bring the vision to life,” continued Bronski. “We worked closely with SHOP for 2D and Stout for 3D visuals. Stout deployed Notch to render the dynamic 3D world and the camera tracking was handled by infrared Mo-Sys Engineering StarTracker. The result was mesmerising and offered viewers a truly moving, immersive visualisation.”

Although being aware of both Bluman Associates and Stout Studios, this marked TAWBOX’s first time collaborating with the two companies. “Lewis [Kyle White – Stout Studios] has an amazing reputation for his Notch skills, and artistic style in designing 3D visuals, which were paramount for the 3D section of the performance,” Bronski added. “And Pod [Bluman – Bluman Associates] is a well-respected figure in projection and video solutions and a natural choice for this project.”

Speaking of his experience, Bluman asserted that the project would not have been possible without an escalated level of help from disguise. The project presented a new application for the disguise xR software. “We realised the key to making this work was 100% alignment between the virtual worlds in disguise and Mo-Sys and the real world.”

Jamie Sunter, Senior Support Specialist at disguise, added: "Bluman Associates approached us with a challenge where we saw the xR workflow, currently under development, would help overcome. We managed to remotely support the team during testing and rehearsals, then I joined them on site to ensure that we could get the best show possible for them."

Another integral cog in the project was having one devoted Steadicamera Operator, John Clarke. “It was vital that we had the consistency of the same operator throughout the whole rehearsal and show as the steadicam’s movement was highly choreographed to synchronise with the artist and the content as it was projected,” Bluman commented.

Bluman Associates used an infrared Mo-Sys Engineering StarTracker facing down with black retro reflective stickers placed on the stage floor. StarTracker generated off-set coordinates and tracked the position of the camera at all times, enabling the projection to be locked onto the piano for a seamless viewing experience.

The wireless StarTracker gave the steadicam operator the freedom to move around the whole piano, whilst the tracking data and camera feed were being sent wirelessly to the master control room backstage. This enabled the 2D light projection to appear 3D with natural depth and adaptive perspective.

“To the naked eye, the projection was 2D and distorted, but everyone watching the IMAGs in the O2 Arena and the viewers at home were treated to an immersive 3D visualisation,” noted Adam Smith from Mo-Sys Engineering, who went on to explain how the feat was accomplished. “The combination of the Notch 3D graphics and Dave’s powerful lyrics connected with audiences, driving viewer engagements in a new and innovative way.” 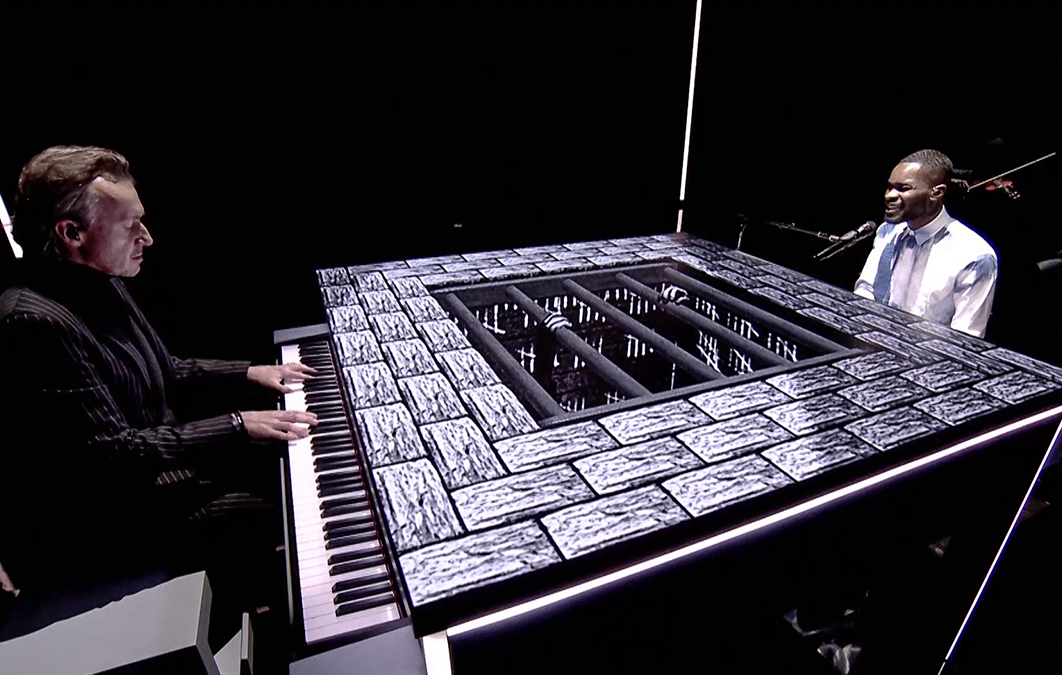 Michael Geissler, CEO of Mo-Sys Engineering, commented on how rewarding it was for his team to have been involved with Dave’s captivating performance – and again used the word of the day: “immersive”.

“StarTracker was specifically developed for live productions like this and enabled millions of viewers at home to experience a seamless and truly immersive projection,” he commented.

The team at disguise worked around the clock behind the scenes using the latest xR software as well as a reference TV. “A TV was used on stage to calibrate the system once during load-in at rehearsals,” explained Kyle Reseigh, Notch Designer and disguise Programmer at Bluman.

“The steadicam operator was able to explore the ‘inside’ of the real-time 3D content. Inside Notch, Lewis from Stout Studio used the exposable camera workflow to allow the tracked camera to explore the 3D environment and gain the parallax effect with the content. The team from Bluman Associates used the disguise gx 2c, Notch and Mo-Sys Engineering tracking system to make the effect of interactive 3D based projection from the camera’s perspective. Using the latest disguise xR software allowed us to match the worlds of Mo-Sys Engineering, disguise and Notch with ease.” 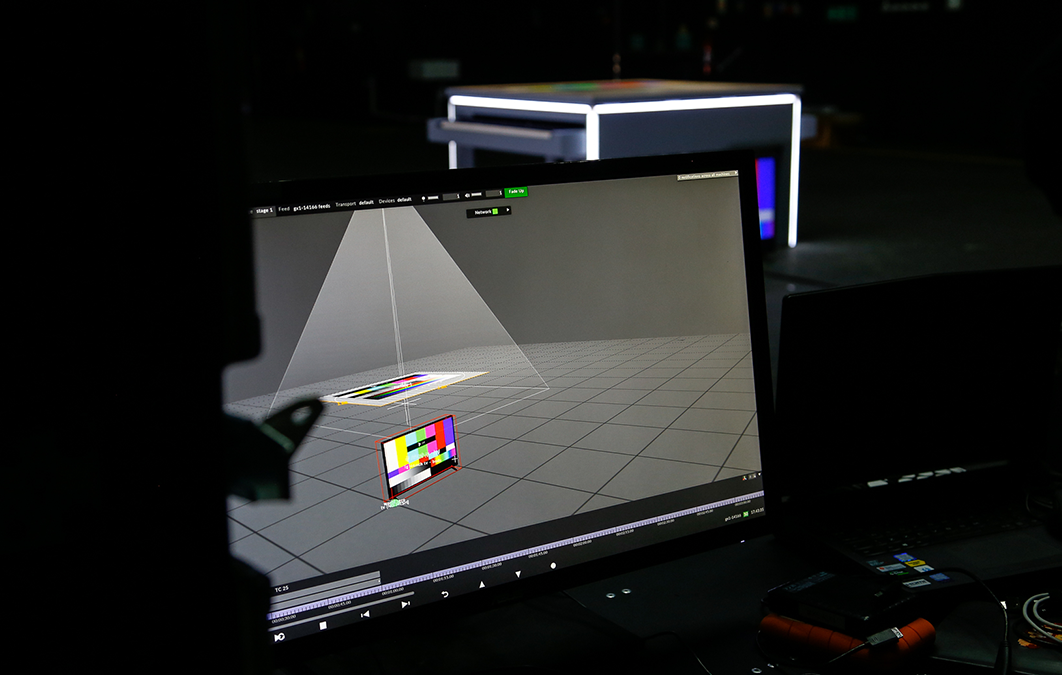 Matt Swoboda, founder of Notch, was pleased with the end result. “Thought-provoking installations such as this one are rising in popularity with performers who want to create an inspiring stage design for a multichannel audience. Dave’s performance shows the impact motion graphics can have in bringing audiences into the story – whether they’re watching live or from behind a screen. Brilliant visuals are able to bridge the gap between the virtual and the physical realm.”

Bluman noted: “Dave’s microphone going down on to the piano and interrupting the light beam revealed the mix of the virtual world and the real world was incredibly powerful.”

“It’s been fantastic to be part of Dave’s journey,” shared Rimell, who felt “humbled” to play a part in the creative process. “I’m happy that a 21-year-old young man from South London got the chance to share his art and voice on an excellent platform like the BRITs.”

It was a sentiment that was echoed by Bronski. “The reaction to the performance has been incredible. Even though we did something tightly scripted and technically challenging, we still created a performance that was all about the artist – his words, emotion and delivery. And, at the end of the day, that’s what it’s all about.”