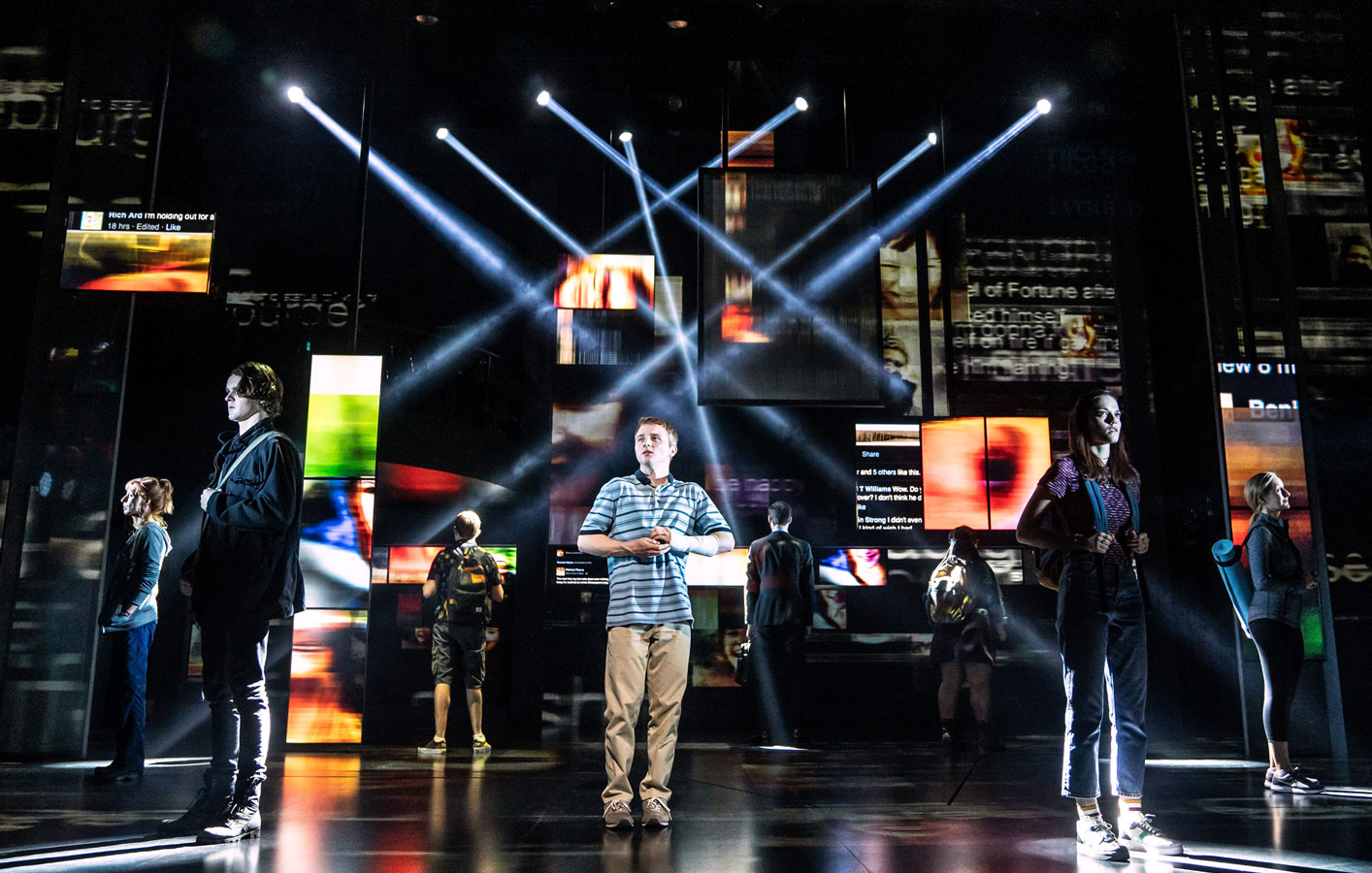 Supplied by Stage Sound Services, three disguise vx 4 and four gx 1 servers powered projections for the show, highlighting the huge impact of social media on daily life and creating an immersive social media environment on stage for the actors.

“The cornerstone of the play is Evan and his interaction with the real world through a social media lens,” says Projection Designer Peter Nigrini. “To successfully tell our story, social media needed to be a visceral part of the theatrical environment. After the set designer created a physical environment, my job was to bring this virtual world to life on stage and give it the emotional power that so many teenagers clearly feel in their day to day lives.”

Every surface of the playing space can be covered by content. Display surfaces include a front projection system, a series of portals and tracking panels, flat-panel LCD monitors and the stage floor. Eight projectors and 32 monitors are deployed.

Peter notes that “every piece of scenery that moves in the design is automated, and we can track it in real time. In moving the show to London we were also able to pre-visualise the entire production in New York, make decisions about automation and scenery in response to the changed dimensions of the London production.  We were able to feed this back to other departments so it could all be pre-programmed. Integration with automation is key in disguise.” 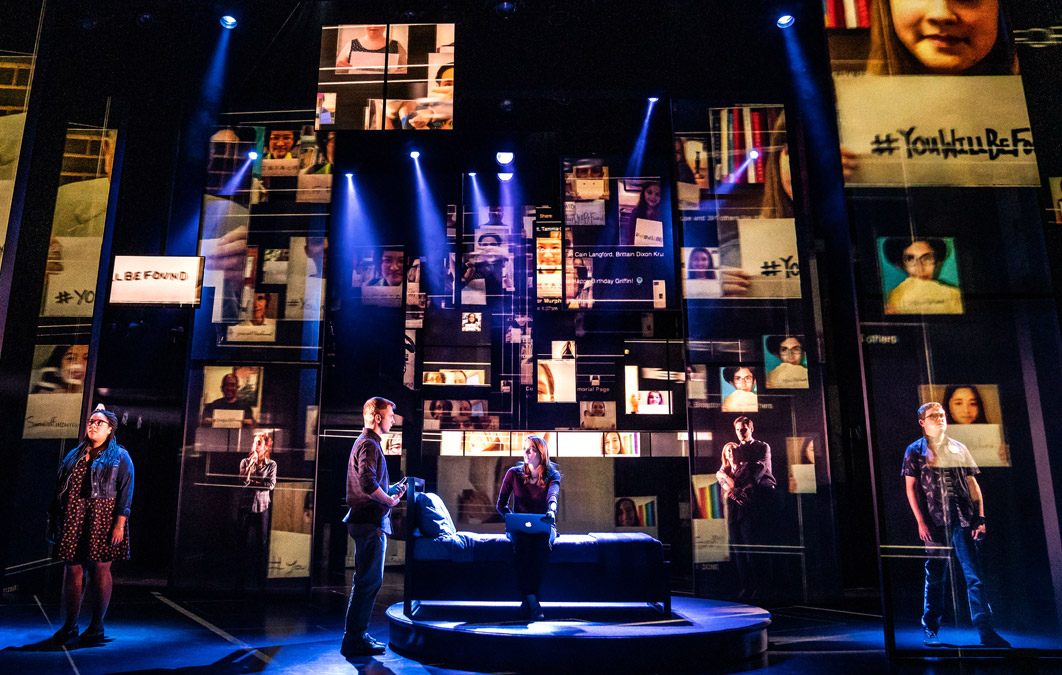 The nearest audience member is three meters from the stage, he says, “so the tolerances we needed to achieve for that level of proximity are different from an arena environment for touring. There is an incredible delicacy to it; in an arena production everything is in motion and at a distance no one will see the imperfections, but in the most emotional moments of this production, when all is dark and quiet the technology must be flawless.

Theatre pushes these boundaries and that demand for visual perfection ripples into the quality of the servers and software required.”

disguise was chosen “to have precise control over where tiny fragments of image are mapped,” says Peter.  “I’ve always skirted the edge of disguise’s capacity in my shows. It is a perverse inversion of scale you experience when working in the theatre – we are working in a tiny space but with 40 HD video channels and requiring the capacity of the vx 4 to deliver them.”

Cast rotation plays a central role in ‘Dear Evan Hansen’. The company has 17 actors in total, with 8 actors on stage at one time. With a changing cast for each performance, each of whom appear in pre-recorded video footage during the show, the disguise real-time workflow helps facilitate cast rotation and the live video effects. 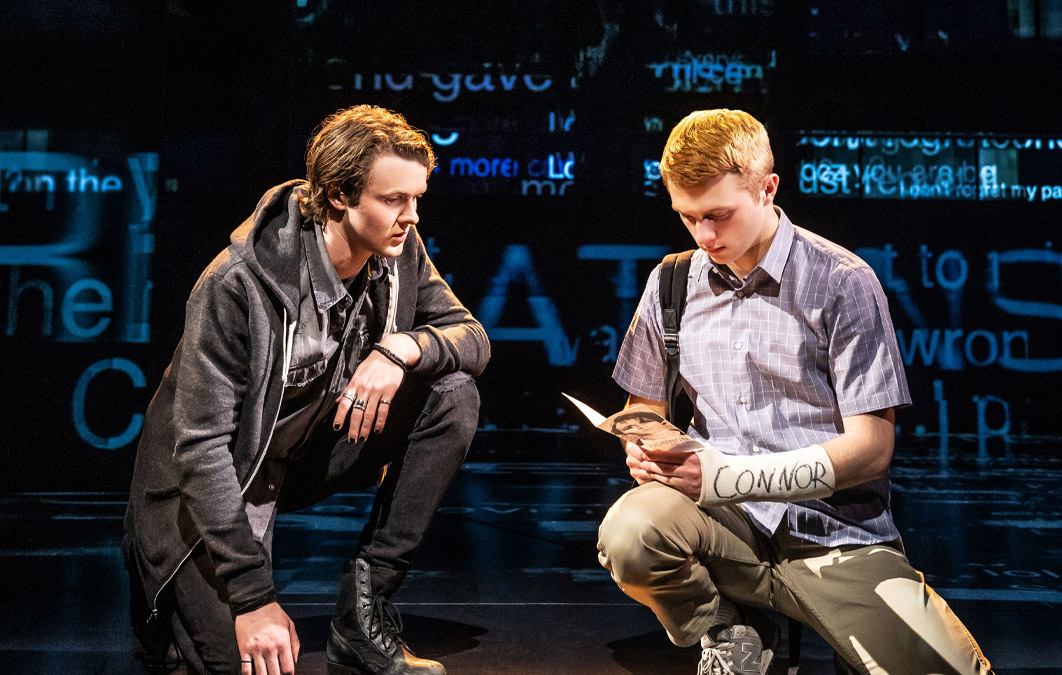 “We program a file that has an image of Evan Hansen, and each of the actors who could play the role. Before the show the stage manager tells us which actor will play the role in that performance, and we set the footage for that actor. We can switch that footage in real-time and it ripples through the whole production saving a lot of time. We don’t leave disguise programmers on the show for its run, so this feature allows us to build a show with all of those pieces of content existing within the machine at any given time so it can be managed by those staff members who remain on-site.”

Cast rotation is also used with camera presets, Peter adds. “The only character who isn’t pre-recorded has a live camera so now the camera preset we use is based on that lookup table, ensuring the camera shots are aligned with the actor’s height.”

“Throughout the prep and technical rehearsals we worked closely with the show’s video design and production teams to assist with any equipment alterations and could always rely on the disguise servers to perform every step along the way,” says James Paul, Senior Account Manager with Stage Sound Services, which was awarded the rental contract.  “Before the video system was finalised we were fortunate enough to be able to upgrade the original specification from disguise 4x4 pro servers to vx 4 servers, which played a big part in bringing the show’s demands to life.”

Tickets for the London run of ‘Dear Evan Hansen’ are selling fast, and disguise is poised to help the audience favourite deliver an acclaimed production show after show.