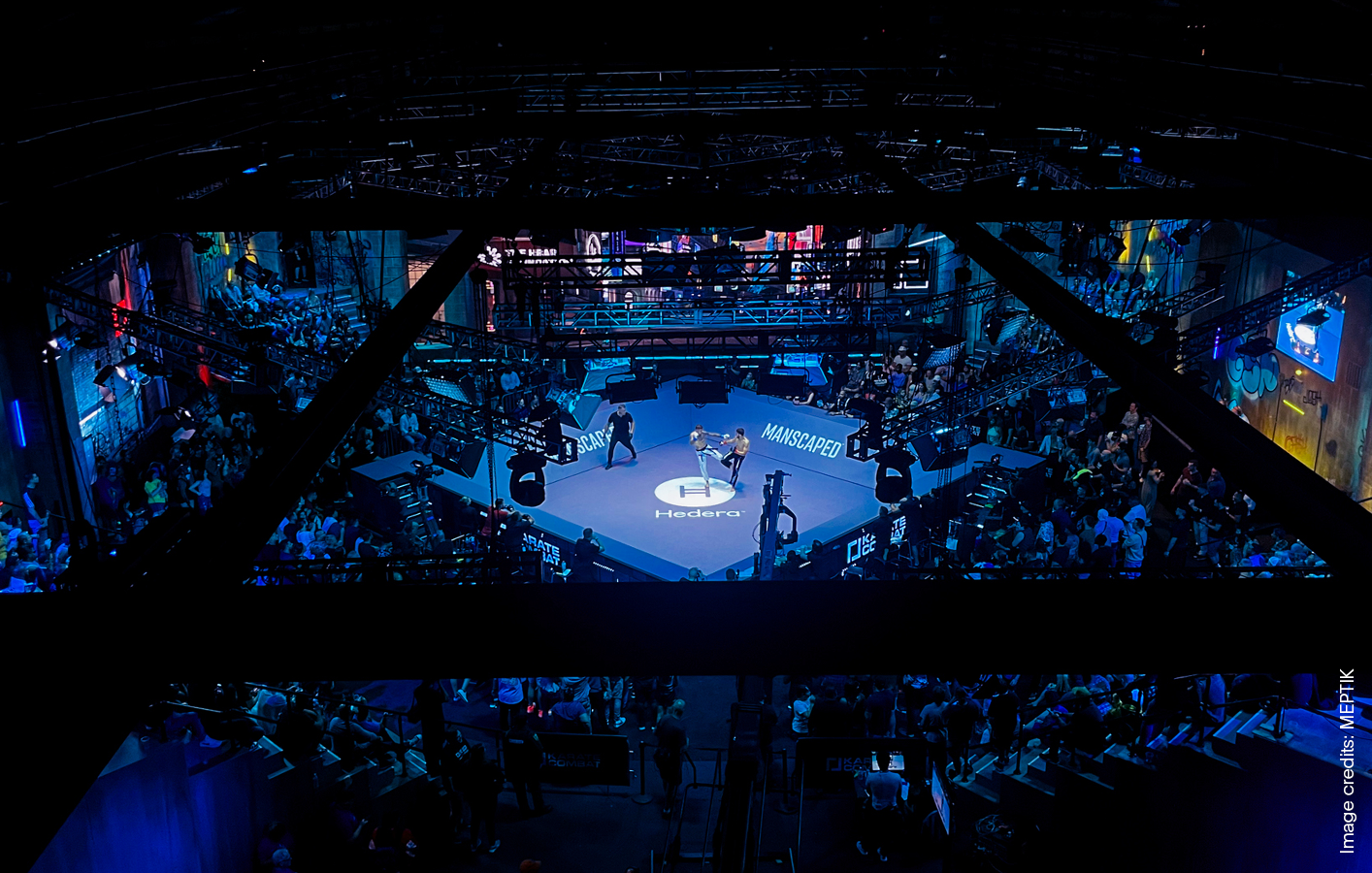 Karate Combat is the only combat sports league to offer a proprietary blend of live-action, full-contact karate fights taking place in immersive CGI environments powered by Unreal Engine software. The Karate Combat 35 competition, held in August on the backlot at Universal Studios in Orlando, shattered viewership and social media records for the organisation. In this case study you will see how Atlanta-based Meptik, a disguise company specialised in reimagined hybrid, virtual and metaverse experiences, used the disguise xR workflow to deliver an event for a league which continues to set records with every new competition.

countries where the broadcast was aired live

The challenge
The project’s timeline had a quick turnaround: less than one month from Meptik signing on to delivery and just one week to deploy the xR solution on set. The Meptik team, needing a robust and reliable xR workflow, opted to use two disguise vx 2 and one vx 4 media servers plus a pair of rx II real-time rendering nodes. Their biggest technical challenge proved to be calibrating the LED videowall for a variable lens due to the breathing of the lens at longer focal lengths. The precise nature of virtual set extension made even the smallest offset noticeable. They also faced issues with frame delay, which were resolved by manually calibrating the delay on two axes. 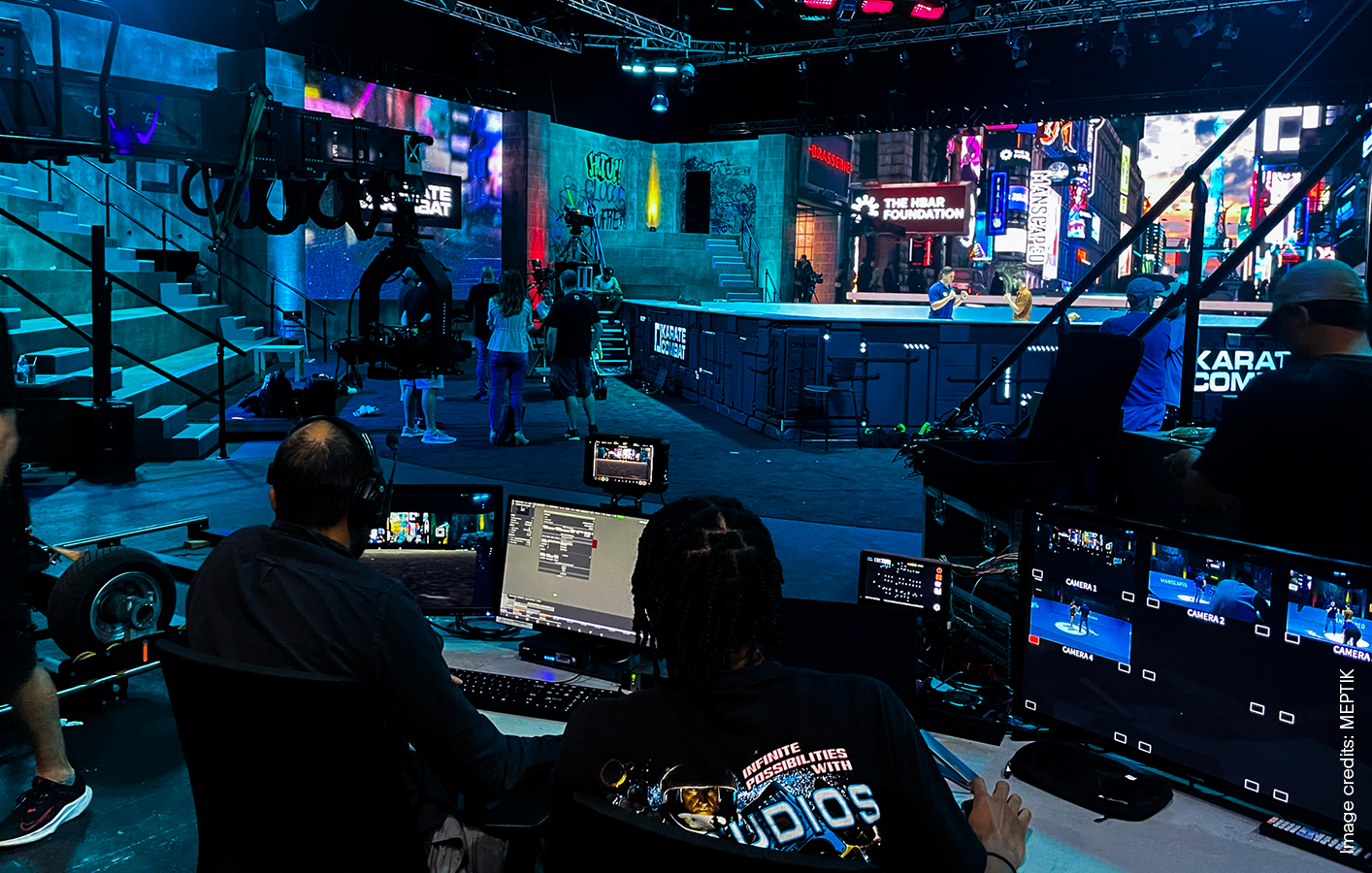 The virtual set featured a rough cobblestone road leading to the still iconic Eiffel Tower. The actual fighting ring was right in the centre of the road with physical props adding to the illusion of being on a dingy side street. The seamless blending of the real and the virtual immersed the studio audience to almost 270º.

The disguise xR workflow helped the team overcome their challenges by providing an integrated solution that could be quickly deployed. Meptik’s Senior xR Specialist, David Vargas, believes that xR was a great choice as it allowed for fluid creativity for everyone involved: the team were able to make quick, live changes to the project that were immediately iterated while virtual set extension provided the perfect solution to build out the world they had envisioned.

Working with the disguise xR workflow was fantastic – the ability to quickly set up and troubleshoot issues was imperative to the success of the project. disguise provided an integrated ecosystem that allowed for quick and reliable deployment, perfect for the turnaround required."

Results
The energy of the live crowd and the physical set combined with the unlimited possibilities of a virtual environment created a best-of-both-worlds setting for a unique event, reaching a sold-out live audience and an additional 2.1 million viewers watching on Facebook, Instagram, YouTube, TikTok, Snapchat and Karate.com. With extended reality, each event could take place in a different time period in history or in a fictitious future location – a fresh and different creative approach that makes Karate Combat stand out from other live and virtual shows.

Conclusion
According to Smith, Karate Combat 35 exemplified the possibilities of the symbiotic relationship between a physical live set and a virtual environment, bridging the best of both worlds. “This approach is beneficial for live events that might lack the studio space or the capabilities to furnish a complete physical environment while allowing for more dynamic camera moves and a more exciting production,” says Smith. 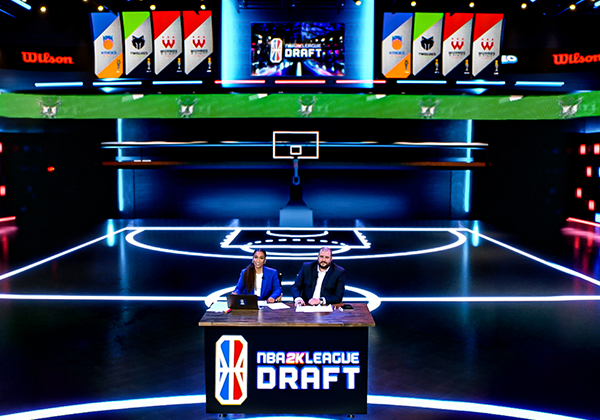