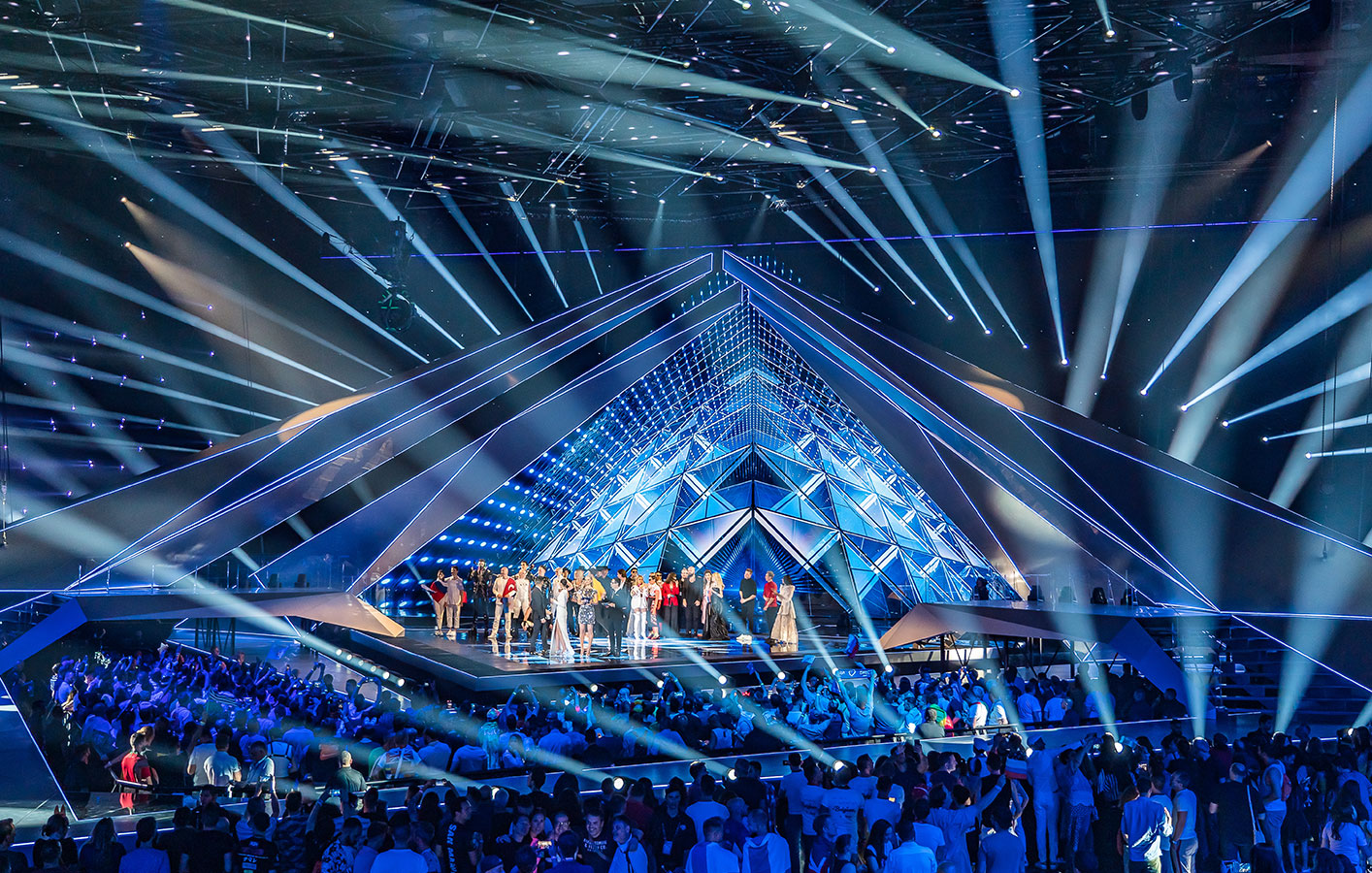 The hotly-anticipated Eurovision 2019 spectacular landed in Tel Aviv in May with a bold ‘Dare to Dream’ tagline and world-class staging upon which 26 countries battled to be crowned winner. Video returned to the core of the show, powered by a chorus of disguise vx 4 and 4x4pro servers.

The 64th edition of the much-loved song contest, held at Expo Tel Aviv, featured a 250 sq.m. high-resolution LED, diamond-shaped stage, backed by a 36 x 12m high-resolution LED wall made up of 12 individual screens, all supplied by PRG. More than 16,998,976 pixels lit up the stage, making it the highest resolution LED set in Eurovision history.

Eurovision Production Manager Ola Melzig, and Head of Video and Stage Technology, Shay Bonder, approached disguise to deliver and manage a server system capable of processing the mammoth amount of data required for the vast scale of the project.

“A major challenge for us was making the pre-programming process as accurate as possible and then operating it in perfect sync, without issue. disguise’s software allowed us to pre-programme with cameras and automation - the camera directors actually showed the camera operators the render from the Designer machines in order to give them instructions! – and the ability to programme one track while another is playing, plus the power to easily feed content to DMX screens and quick calibration of projectors.” he adds.

“The disguise system became an integral part of the creative process as we could test video content automation and camera angles in the pre-programming process and change them accordingly to achieve our vision.” 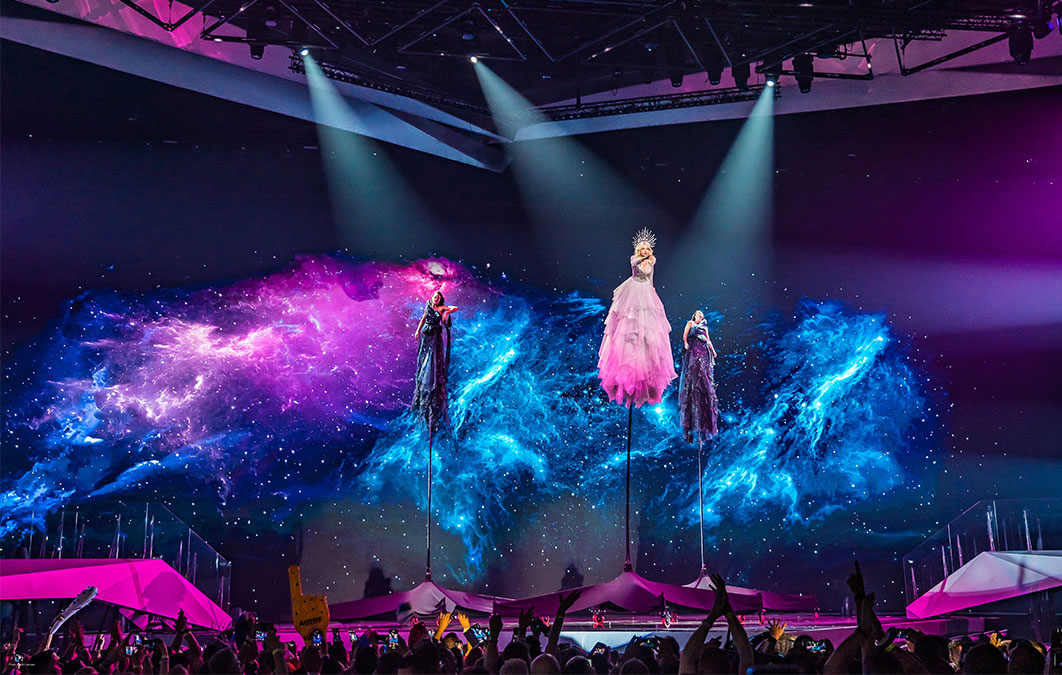 “The pro range of disguise servers were designed to play huge video content across massive canvases,” says Peter. “Thanks to the VFC technology, the vx 4 and 4x4pro servers allow us to drive large shows like this with fewer machines, reducing space, time, setup, risk, and management overhead.”

The vx 4 servers were used as Pure Master, output slaves and Backup servers. The 4x4pro servers were utilised for add-on elements and backup. 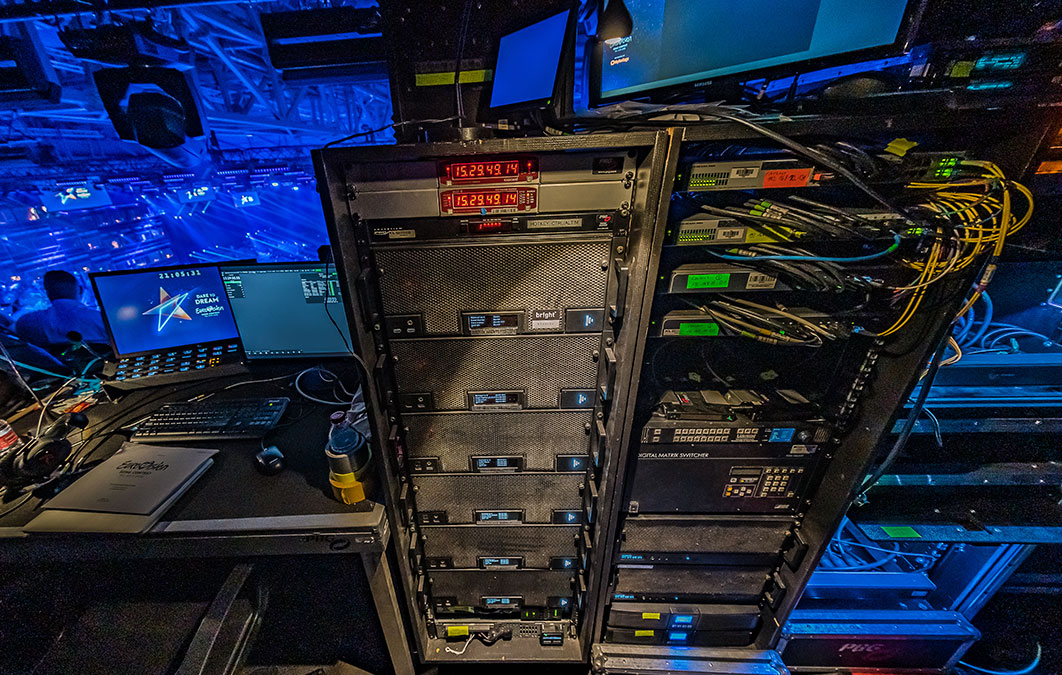 “This system design is all about making sure that the performance headroom is enough for the project,” says Jamie Sunter, Support Specialist at disguise. “With high resolution outputs, large number of props for all the different acts, as well as 400+ universes of Art-Net being output, the system coped fantastically with these requirements. A huge bonus was the larger storage space in the vx 4 meaning the team didn’t have to clean up older file versions during rehearsals.”

The disguise servers received LTC, ensuring the main cues were triggered at the correct time. Much of the programming was completed in the run up to the Tel Aviv events, using disguise’s r15.3 software to pre-visualise the whole show and sequence all the content. The team used disguise’s Visualiser Camera feature and then virtually mapped and sequenced each camera shot and path to the directors’ requirements. From there, they transferred the project from the Designer machines to the actual hardware. 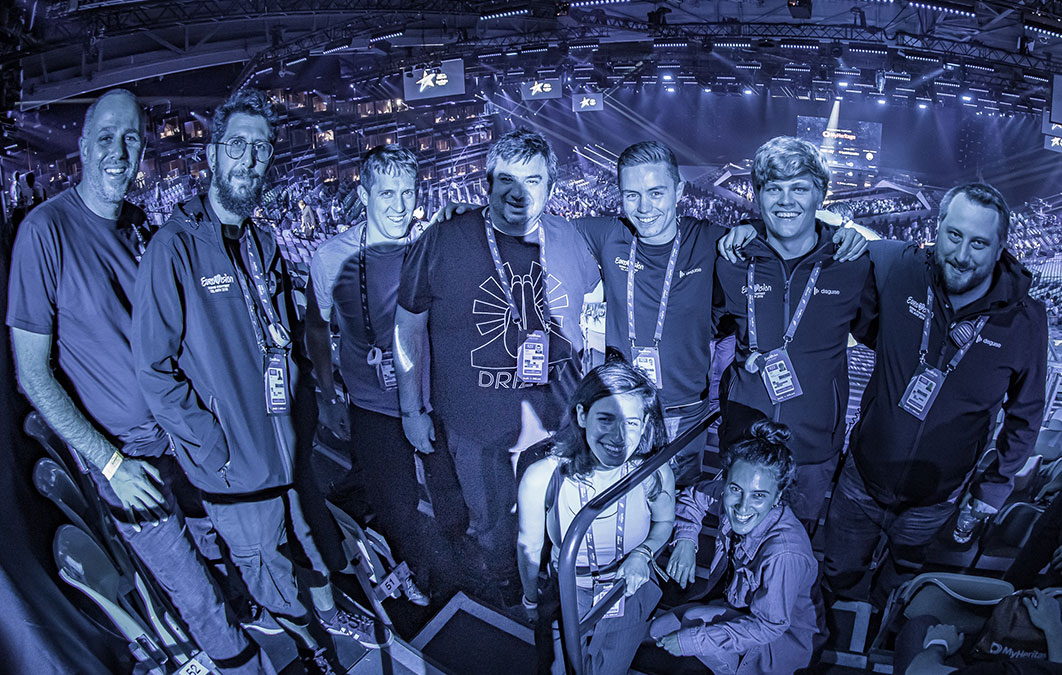 “This was very powerful as this was the first time that the Camera Directors could see how all their shots would look for each song, and then send renders to the Delegates as well by simply recording the stage,” Shay explains. “We had a full 3D model of the stage, as well as seating banks, so that it was a true representation. We also had all the country-specific props and screen movements so it looked exactly how it would for real. From there, the guys then used the OSC module in disguise to send out the Camera positions to WYSIWYG. This meant that the Lighting Team also had these Camera pre-visualisations and could see how their design worked with all elements.” 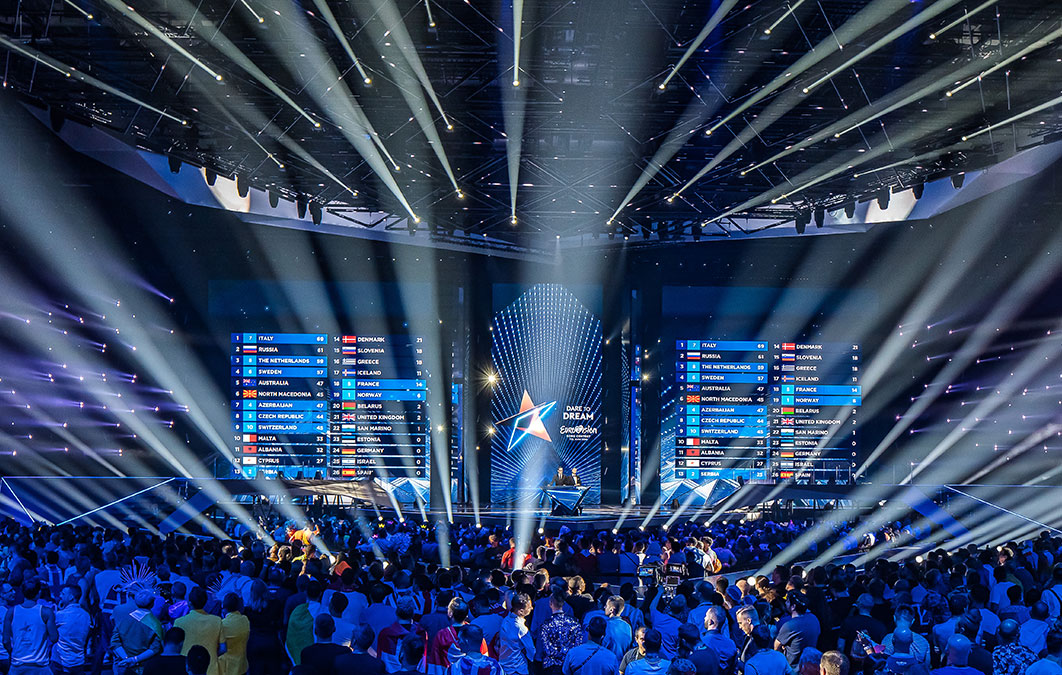 On disguise programming and operating duties was Gwilym Huws, workflow specialist at Bild Studios: “disguise’s feature-set made many elements of pre- and on-site production much simpler and more powerful. It was particularly useful for swapping out props when needed, as well as Screen Position Layer, for the mapping to be correct. Even generative things like radar and strobe were used for some animations in the show on the legs and catwalk.”

Ola Melzig concludes: “Video content, LED on a massive scale, and projection mapping is the backbone of the Eurovision spectacle and I was thrilled to bring it back in such an incredible way this year.”

"This is the first time we’ve brought in disguise’s vx 4 and 4x4 pro servers and their support team, including Jamie Sunter, and we’re hugely impressed. With so much to integrate, process and create, the machines and the people did a fantastic job." 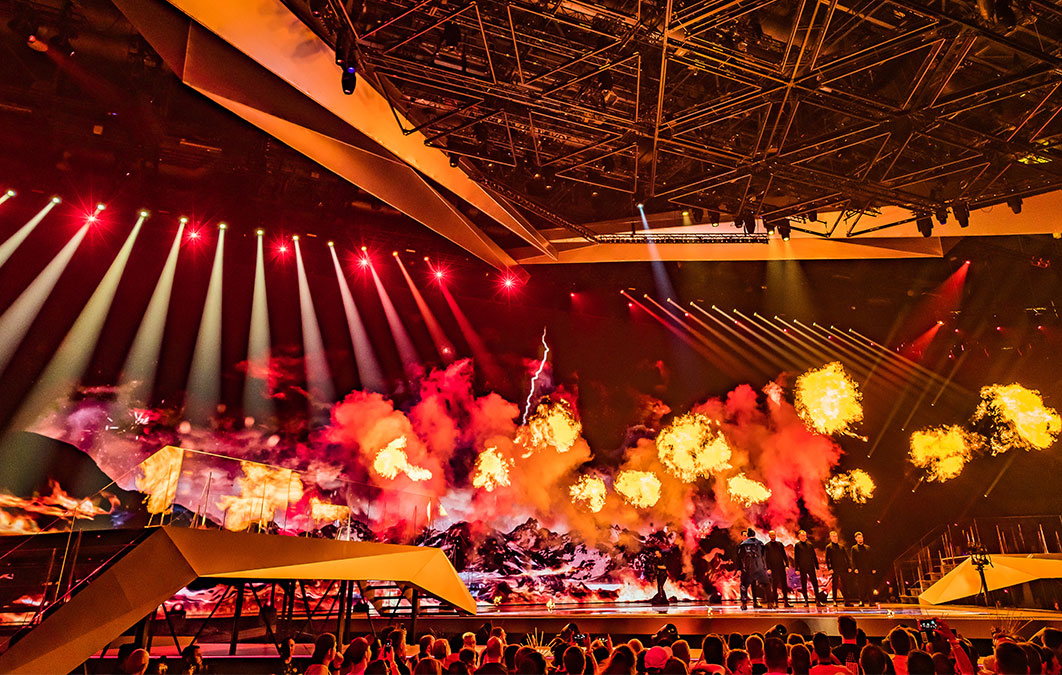 From commission to delivery, disguise’s support team were involved in all aspects of the video project, as Shay says: “Their support was amazing throughout. Before the setup in the venue, disguise set us an online Slack account, on which they answered any questions we had from venue setup. On-site, Jamie checked system stability throughout the process and helped us with whatever we needed.”

Twenty-six countries battled it out in the final to be crowned the winner of Eurovision 2019, with The Netherlands victorious. The live final was broadcast to 200 million viewers in Europe and around the world. 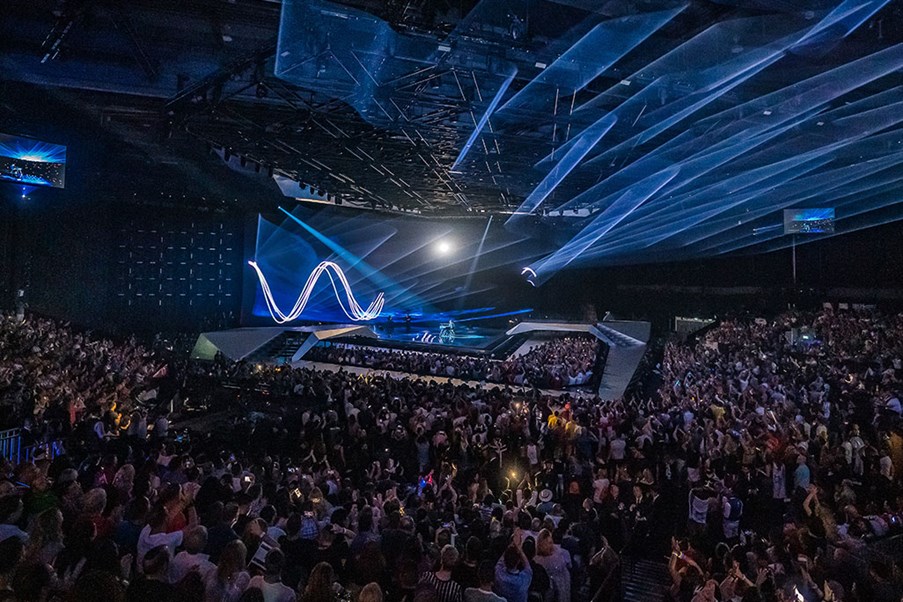 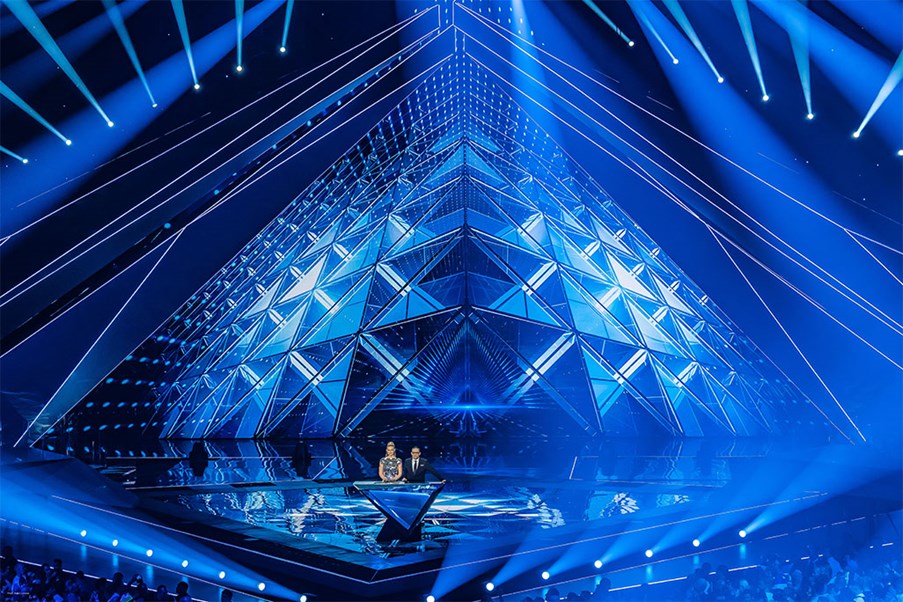 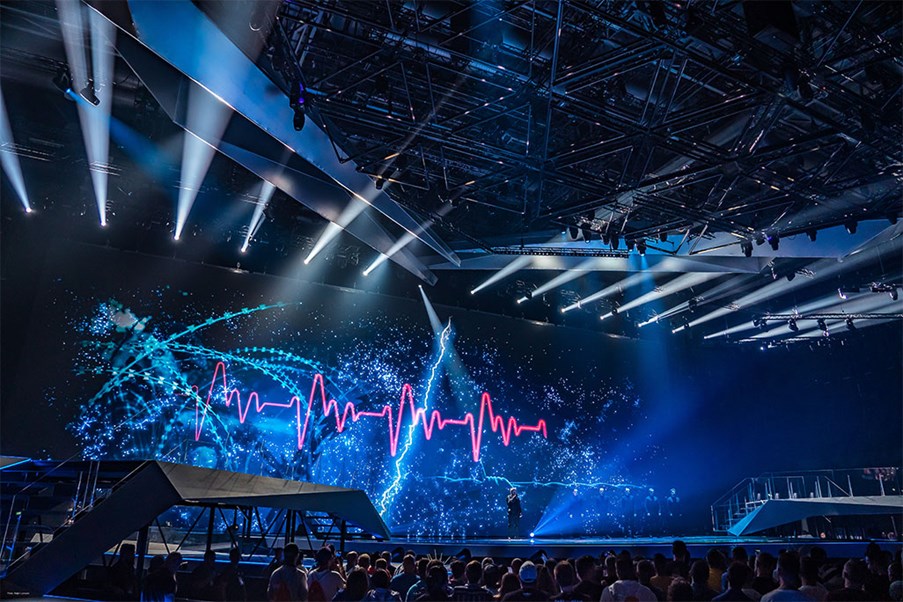 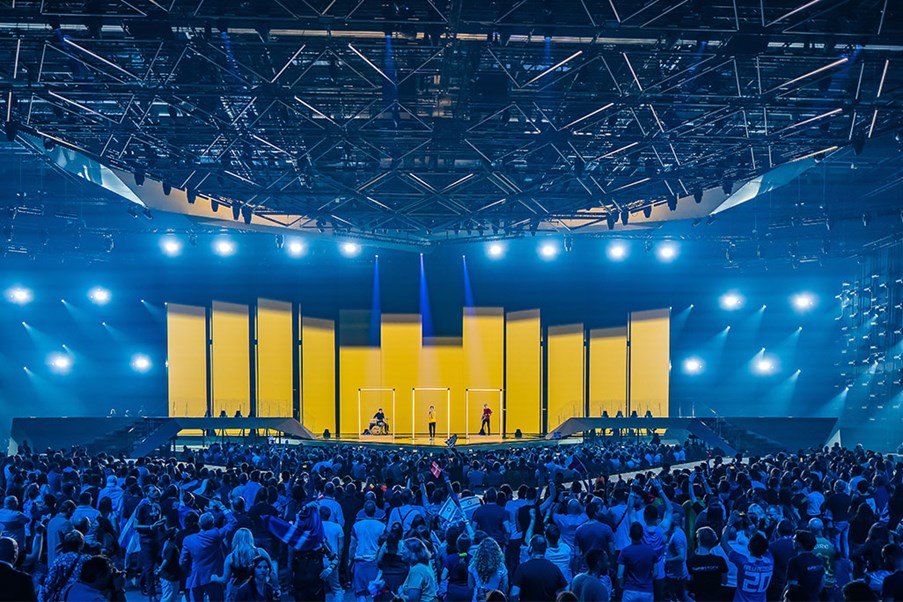 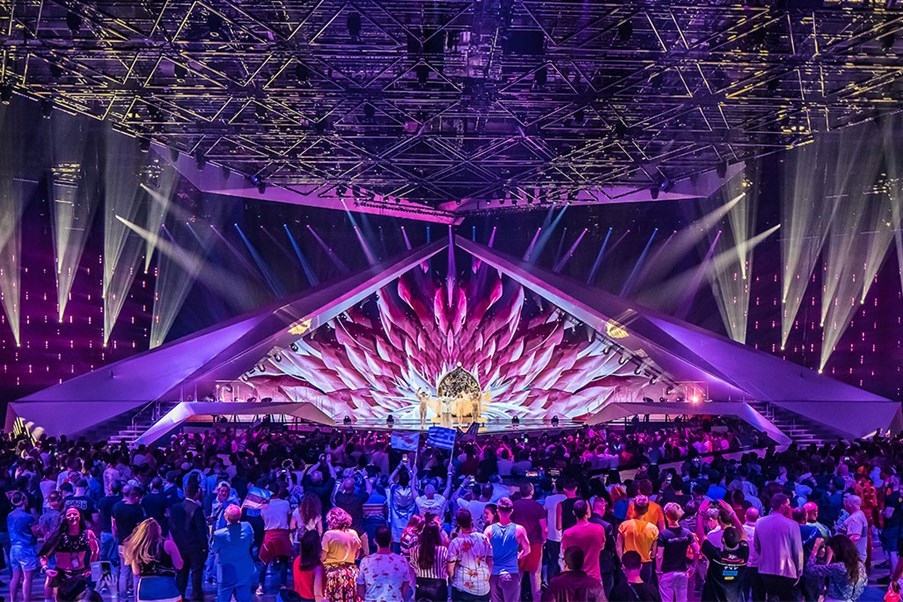 Head of Video and Stage Technology